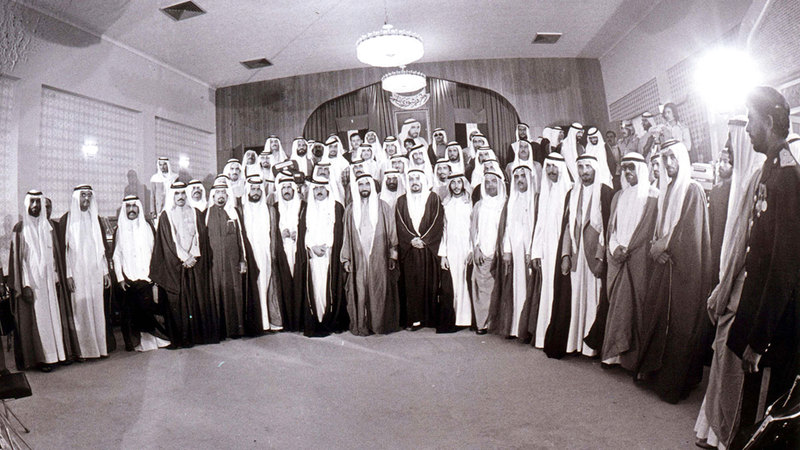 “The masses of the people in every location participate in creating life on the soil of this good land, and look forward to the esteemed Federal National Council to express its ambitions of participating in building a bright, honorable and prosperous future for us and for generations, provided it plays an important role in realizing the great hope of the people of building a future. A society of dignity and prosperity.” birth of the modern parliamentary and parliamentary life of the United Arab Emirates, in his inaugural address to the first regular session of the assembly, which he held on February 12, 1972, he emphasized the aspirations of the people of the Emirates to their representatives in the Federal National Council to be effective, serious, fair and participate faithfully to build the future of the nation.

The Shura approach that Sheikh Zayed took in managing the affairs of the country, and applied in his life, whether in his relations with the tribes and consultation with them or during his rule over the city of Al Ain, was not new to him when he became ruler of Abu Dhabi, when he initiated the establishment of the first advisory council for the emirate of Abu Dhabi on July 1, 1971, and this council came from the point of view of helping the late ruler to perform his duties, as if he wanted to set an example in involving his citizens in the governance of their country, as the predecessors did.

According to the book “Zayed and the Federal National Council” published by the General Secretariat of the Federal National Council, the late Sheikh Zayed was raised with Islamic values ​​and principles, and he grew up with wisdom in the counsel of his father, Sheikh Sultan bin Zayed, may God have mercy on him, and his remarkable personality crystallized out when he was the ruler’s representative in Al Ain.

The book, which was presented by the former Secretary General of the Federal National Council, Dr. Muhammad Salem Al Mazrouei, explained that from the first moment he assumed the position of the ruler’s representative in the city of Al Ain, the late Sheikh Zayed began to implement the principle of consultation with his people, pointing out that the elements and philosophy of Shura which the immortal leader has adopted, in building the state and society, the processes of human building and urbanization fused in two parallel tracks.

The book stated that since the first moment of the takeover of government by the late Sheikh Zayed in Abu Dhabi, he has established the rules of government administration and organized it on modern foundations, and he was aware that in the period after 1966 had to build a new society for future generations and not for future limited years, and since August 6, 1966, in the position of responsible, the founder defined his view of the reality of popular participation, so he took the initiative to set up the “Planning Council in the Emirates of Abu Dhabi.” At first glance, many may think that this council was something unique in the life of the Emirate of Abu Dhabi, but in fact it was as an extension of the approach and traditions of the fathers and grandfathers, the late Sheikh Zayed followed, while the rulers of Abu Dhabi the tribal sheikhs and the owners of knowledge and know-how gathered around them in the form of a council or body that consults them on important matters.

With the launch of the work of the National Council in the country in 1972, the founder was eager to consolidate one of the main principles of the political practice of his thoughts and his brothers, Their Highnesses, rulers of the Emirates. political participation of citizens in leading national action and assuming their responsibilities Mutual trust between Sheikh Zayed and the National Council was a reflection of the method of governance that established its bases in the Emirates.

The book summarized the manifestations of the late Sheikh Zayed bin Sultan Al Nahyan’s interest in the Federal National Council and parliamentary life in the country, in eight procedures the founder has been eager to follow since the Council’s inception, to serve as direct messages , which reflect the importance of the Council and the role expected of its members, reflected in His Highness’ willingness to attend the opening sessions of the Council’s first regular sessions, participate in the members’ discussions in some sessions of the Council, and His Highness Highness’s meeting with the members of the Council after each session he attends, speaking with them and listening to their problems in a transparent mind, surrounded by warm feelings and the fatherhood of the leader, and His Highness’s reception of the commissions that responded to the opening speech in Each New Cycle.

The proceedings also include His Highness’ willingness to receive Arab and foreign parliamentary delegations attending the country, and to monitor the activities of Arab parliaments, expressing his comments and directions, in addition to his repeated appeals and advice to members of the Council to gauge the needs of citizens, and also to invite Council members to intensify field visits.

Strengthening the position of the “national”

The book “Zayed and the Federal National Council” mentioned that the follower of the interactive relationship between the thought of the late Sheikh Zayed, may his soul rest in peace, and his political approach to governance based on shura and the Federal National Council, will notice notes that this relationship has been characterized by mutual trust in the leaders’ ability to bear the burdens of the development process and development, and the National Council’s ability to be a support and aid to the wise leadership as it makes its way works towards a bright future. This interactive relationship is more prominent in the development projects led by the late God Almighty, in all the emirates of the country, with the strengthening and succession of the Federal National Council, and also emerges at the level of Arab and international relations. He pointed out that the positive role this constitutional institution has played in carrying out the founding leader’s vision of building the state of the union, consolidating the home front, providing citizens with a life of prosperity, opening up to the world with a message of peace and cooperation, supporting the oppressed, fighting bigotry and terrorism, and highlighting the true face of Arab civilization. The Islamic State, to which the United Arab Emirates proudly belongs, came into existence thanks to the special care of the founder of this institution, when he held it responsible for participating in development, representing the people and taking their hand to a life of pride, well-being and dignity.

• From the first moment he took the position of ruler’s representative in Al Ain, Zayed started to practice the principle of consultation with his people.

Zayed said about the union

• Defending the Union is a sacred duty of every citizen, and performing military service is an honor.

• The bond lives in my soul, in my heart and dearest in my existence, and I can’t imagine one day letting it be neglected or neglecting its future.