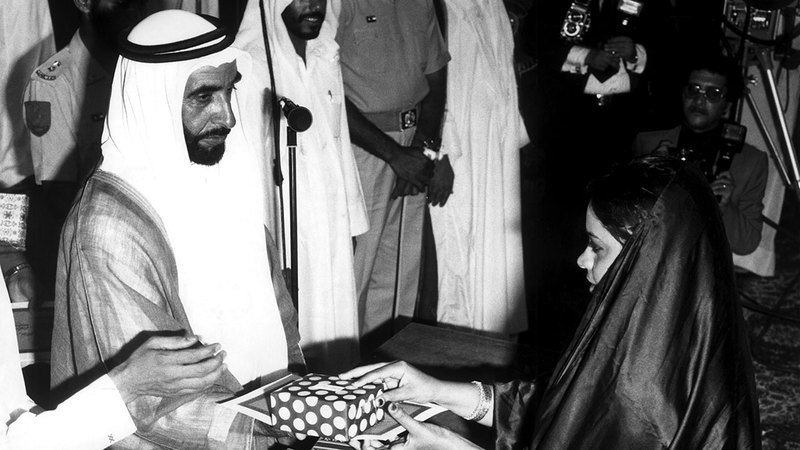 The late Sheikh Zayed bin Sultan Al Nahyan laid the first pillars of the women’s empowerment system in the Emirates in all social and economic areas, enacting a series of laws and legislation and establishing active and effective entities that serve and support women. in understanding their rights and helping them to obtain them.

The late Sheikh Zayed, may his soul rest in peace, believed in the abilities of women and the importance of their role as partners for men in the process of building and development. Emirati women received his attention and support until they found their natural role as an important contributor to the process of construction and development before and after the founding of the United Arab Emirates.

The creation of women’s associations marked the beginning of an extensive trajectory of initiatives and projects carried out by the state to empower women economically and socially. The UAE celebrates Emirati Women’s Day on August 28, the same day the General Women’s Union was founded. The celebration represents an appreciation and honor for what Emirati women have provided to support the country’s march inside and outside the country.

During the late era, major laws were enacted upon which the institutions operating in the state relied, regarding women’s equal access to their rights and as a contributing partner counting their abilities and hopes. , and other basic rights that guarantee them a life with dignity and enable them to continue their lives in security and stability.

The UAE recognizes and values ​​unpaid care and domestic work for women through the provision of public services and infrastructure, the development of social protection policies and the promotion of family responsibility. Under Federal Social Security Act No. 2 of 2001, enacted during the late Sheikh Zayed’s era, a number of women’s groups are entitled to monthly benefits. These categories include: widowed and abandoned women, as well as female citizens who are married to foreigners who are unable to earn a living for reasons beyond their control.

As for the laws that helped empower women in the educational field, this was evident from the articles of the Constitution and legislation enacted during the late Sheikh Zayed’s era, as Article (17) of the Constitution of the United Arab Emirates , and Article (1 ) of Federal Law No. (11) ) for the year 1972 on Compulsory Education, which states that education is an essential factor for the advancement of society, and that it is compulsory for women and men in the primary school, and free at all stages across the country.

• The Founder’s Era laid the first pillars of the women’s empowerment system in the Emirates in all social and economic areas.

• «The best way to build a society starts with building the educated citizen, because science leads to reaching the required level, and it is the duty of every citizen to work on developing his capacities and raising his scientific level to participate in building the union march for a better life”.

• “Universities were and always will be the torches that will light the path of civilization and pave the way for progress and advancement.”