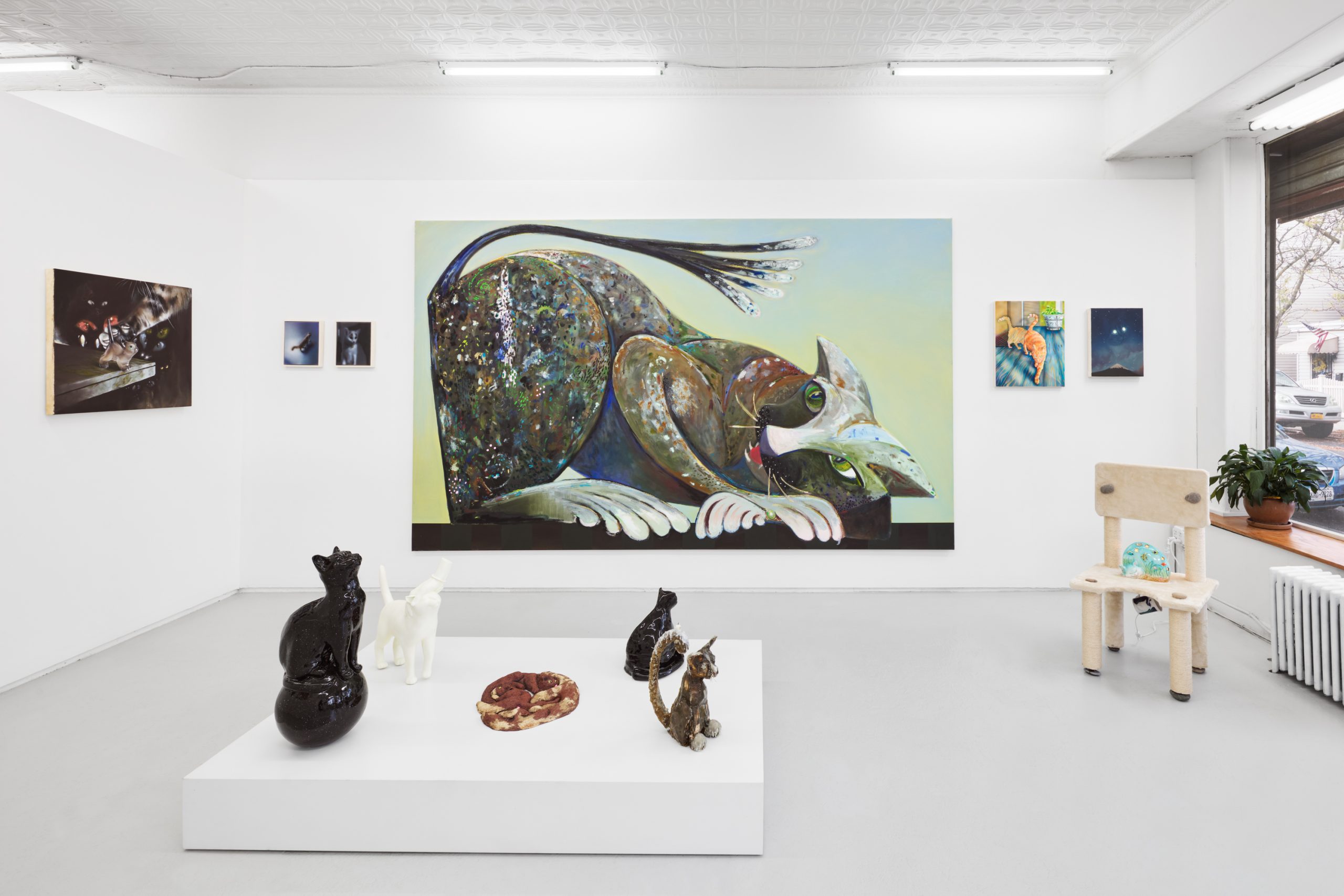 The holidays are a time of relaxation and reflection. No matter your tradition, we at Hyperallergic hope you get some time to recharge and appreciate what matters most. If you’re looking for something to see, New York is still thriving with activity in museums and galleries in the boroughs. Our December highlights include art created during the first stock market crash, a tribute to feline friends, and the 10th anniversary of a pivotal public art initiative. See you in 2023!

Shandaken Projects was first established as artists’ defense against art market woes and rapid gentrification. Since 2012, they have worked to build sustainable studio spaces and implement free public programs, including billboard initiatives, graphic workshops, and residencies at the Storm King Art Center. Their 10th anniversary show is therefore cause for celebration, with all proceeds going towards next year’s programming. More than 140 mixed-media works by alumni of all ages are on display, charting the trajectory of a young institution with a bright future.

With all the focus on investments in fossil fuels in the art world, Marjolijn De Wit’s latest series should both enchant and frustrate. Sorry for the damage turns elitist excuses inside out and brings together symbols of wealth and beautiful nature scenes. Butterflies, diamonds and plated diners flutter and hover in heavily wooded settings – all of this was achieved by juxtaposing advertisements and editorial photos National Graphic Magazines. Here, De Wit shows the real value of what we produce, and how much we have to suffer for it.

Rather than claiming the wilderness as his own, 80-year-old painter Tom Uttech presents it as it is. Uttech captures what he calls the “tranquil ecstasy” of Ojibwe lands now known as Wisconsin, Minnesota, and Canada. But though the property was forcibly changed, many of its protectors have remained: the swirling night sky, lone bears, and rushing rivers. Presented in handcrafted woodgrain frames, Uttech brings out the subtle hues of the region he knows best and encourages us to reflect on the meaning of home.

Sophia-Yemisi Adeyemo presents the colonized memory as a fractional space and uses a twisted method to accentuate the gaps. Based on 20th-century photography from West Africa and the Caribbean, Adeyemo’s sparse paintings and sculptures depict scenes of subjugation to fragments of guerrilla refugees. Machetes and assault rifles are camouflaged by flora and fauna, interrupted by portraits of black and indigenous families staring straight at the viewer. Against the sterile white walls, Adeyemo presents a lounge of revolt that confronts the colonial gaze head-on.

Even a cat can look at the queen

Cats have never really been known to follow orders. On the contrary, their lack of discipline is part of their mystique. Accordingly, a new group show pits Mrs. from a long tradition of trying and failing to impose our will on feline disobedience. Sculptures of black cats hearken to ancient Egyptian representations of the deity Bastet, while paintings made with garbage and furniture reference the many (a lot) domestic sacrifices we make for them. Presented together, the 39 artists of Even a cat can look at the queen showing that total control is an illusion – a valuable lesson for all of us.

Grace Nkem: What we do

Grace Nkem’s energetic compositions show a culture in motion. Ancient artifacts and human remains are depicted in European monasteries, suggesting repatriation. Meanwhile, a white man displaying a black woman’s portrait as a “trophy” signals the legacy of colonialism at a time of increased repatriation. But the ghosts and skeletons that appear everywhere stand like dutiful spectators from beyond the grave. Presented in a Flatbush mansion, Images will talk admirably redirects surrealism to its roots in the Global South.

In the 1970s and 1980s, Just Above Midtown (JAM) was the go-to place to find experimental art near where the MoMA now stands. As such, this new retrospective deconstructs the history of the Manhattan gallery. Founded by filmmaker Linda Goode Bryant, JAM became the foundation for people of color working across generations and disciplines – often presented as emerging artists with established performers. Bringing together posters and photos featuring works by Howardena Pindell, David Hammons and Lorraine O’Grady, Just above Midtown is a tribute to the thriving social scene that has spawned many of today’s beloved artists.

Maryna Bilak’s art expresses the all-encompassing nature of Alzheimer’s disease, from its effects on the patient to the pain it causes loved ones. Bilak’s latest exhibition, CARE, is dedicated to her late mother-in-law, Dorothy, and her experiences as a young parent. Frescoes of facial features show the disease eroding our memories, while plaster sculptures, assembled with Dorothy’s own fabrics and furnishings, recreate the domestic spaces she once inhabited. Bilak’s exhibition, shown in a Jewish retirement community, takes us on a journey from grief to healing, showing how art helps us cross that threshold.

The dangers of market volatility have long inspired artists to spoof the capitalist class in myriad ways. For that reason, the New York Public Library takes us back to December 1720, when the first investment bubble burst. Colorful paintings, drawings, graphic designs and printed ephemera hint at the sheer panic on display in public – and the merry performers took it all in. Slow shareholders float listlessly on a boat controlled by the devil. A personification of greed tries to “catch up or outrun” that of fortune, embodying a grand market temptation. Through it all, ordinary working people are dragged into the pandemonium. Before our time of NFTs and other crypto scams, Fortune and folly shows how history can rhyme both and to repeat.