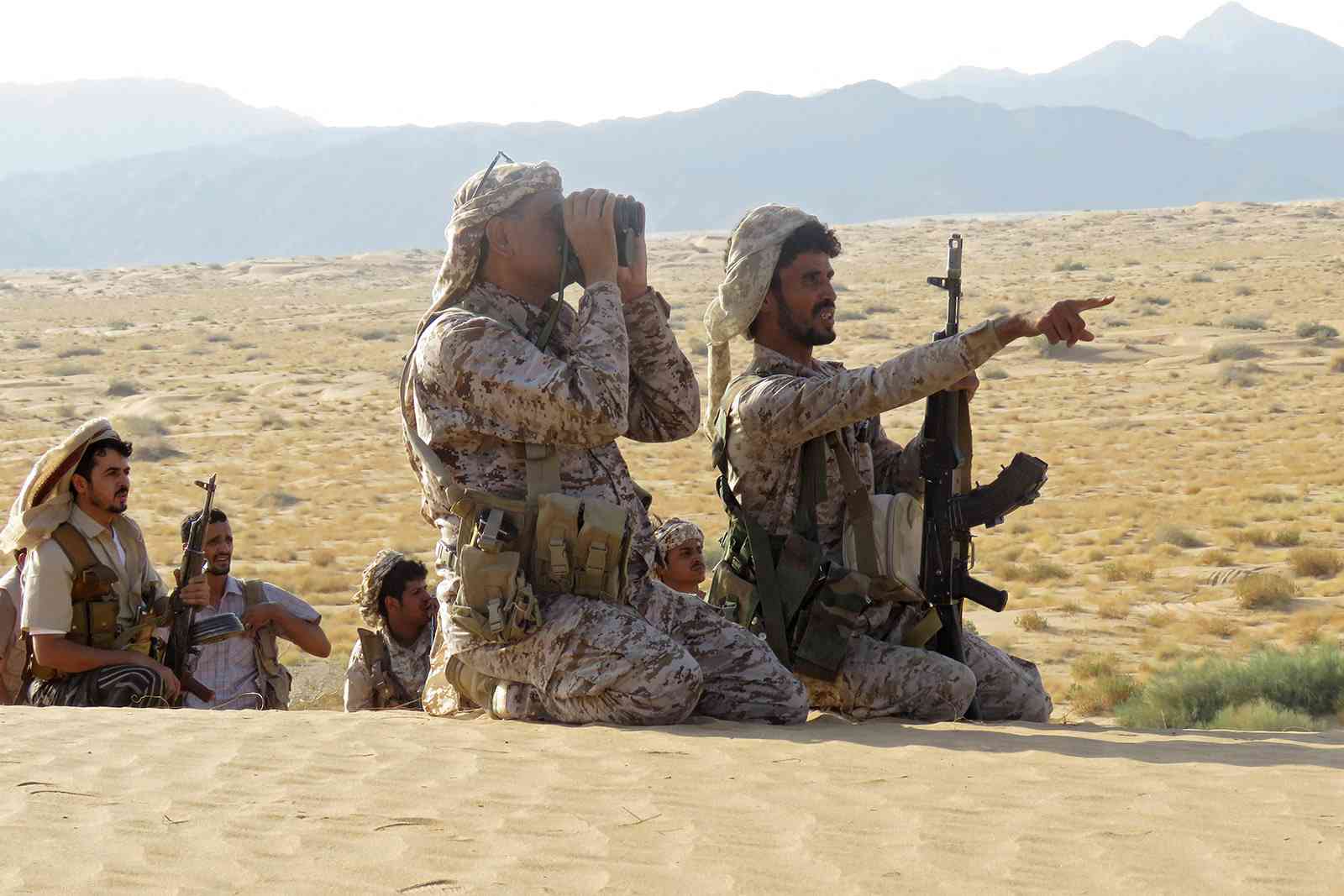 Yemeni forces are preparing for a large-scale military operation against Houthi militias in Abyan and Shabwa governorates, following two terrorist attacks targeting security forces in the past two days that killed 10 security personnel and injured seven others.

A military source in the Yemeni army stated that the army and security forces continue to complete the fight against terrorist groups and militias, noting that the recent attacks have exposed the relationship between terrorist organizations and Houthi militias.

Today, Thursday, the military pledged, in a statement published by the official Yemeni news agency “Saba”, to continue the project to restore the state and eradicate terrorism and extremism. (Abyan and Shabwa) as a collaborator between the militias and the terrorist organization Al-Qaeda.


The Yemeni Armed Forces affirmed that “these terrorist crimes will not prevent the armed forces, with all their formations and formations, from carrying out their constitutional and national duties to fight terrorist organizations with all their names and to confront conspiracies and conspiracies haunting the security and stability of the country.”

She reiterated that the armed forces will continue the fight with the Houthi militias and their project, restore the state and preserve public and private institutions and property in cooperation with the brothers in the coalition in support of legitimacy led by the Kingdom of Saudi Arabia and the United States. Arab Emirates, and continue to work with partners in the international community to eradicate terrorism, extremism and the liberation of Yemen from terrorist groups and militias.


Earlier, Abyan Governorate Police announced its intention to launch a large-scale military operation against al-Qaeda across Abyan Governorate, calling on tribesmen and civilians to support the military and security heroes in the upcoming operation. , with the participation and support of the Security Belt Forces, the Southern and Joint Forces and the Resistance, to fight the next battle, which will be in Abyan and Shabwa.

The Armed Forces of the Southern Giants announced today that they have organized joint meetings of all armed forces in Abyan to coordinate efforts, advance positions and arrange the upcoming military operation to maintain the security and stability of Abyan and others.

With regard to the Houthi violations of the UN ceasefire, the joint forces on the West Coast and Western Taiz announced that they have been monitoring 43 new violations on the coastal fronts in the past 24 hours, including sending reinforcements and efforts to focus in key areas near the lines of contact.

Regarding the UN ceasefire, the Yemeni government announced one condition for accepting a political settlement with the Houthi militia, which rejected the UN envoy’s proposal to open the roads of Taiz, noting that the condition is that the terms of the UN ceasefire must be fully implemented.

Yemeni Foreign Minister Ahmed bin Mubarak, during his meeting with Swedish Special Envoy for Yemen Peter Semneby, emphasized that the current ceasefire, especially the lifting of the siege of Taiz, is an indication of the seriousness of the militias to political settlement, and that the lack of progress on this humanitarian issue will hamper efforts to initiate the political process.

US envoy Tim Lenderking, who arrived in Muscat as part of his new effort to push for the implementation of the ceasefire provisions in Yemen, called on Yemeni parties to adhere to the ceasefire and build on it to achieve a comprehensive political process.

For their part, informed Yemeni sources reported that the Houthi militias are delaying the implementation of the UN ceasefire, especially regarding the roads of Taiz, for fear of what is to come, because the Houthis know the importance of Taiz and therefore continue to dodge and will not open the crosswalks in response to the UN envoy’s calls.

Abdul Karim Shaiban, the head of the government delegation at the Amman consultations on the opening of the roads in Taiz, accused the Houthi militia of trying to manipulate and ignore the decision of UN envoy Hans Grundberg, while simultaneously attacking the UN. -held envoy responsible for taking a strong condemnation decision against the militias after they rejected his proposal regarding the roads of Taiz, calling on the community to make a decision on sanctions against the Houthi militia from the international community, as it hinder the ceasefire.

In Hajjah, engineering teams from the Fifth Military District were able to dismantle a militia-built minefield in the village of Shu’bah in Hiran District, northwest of the governorate. It contained 30 mines, including 8 anti-vehicle mines.

In Sanaa, Houthi militias launched a new campaign against the Sanhan tribe, south of the capital, who are accused of trying to pool the forces of the internationally recognized Yemeni government, according to local sources. of ten armored vehicles and other armed elements on it.

The sources indicated that the militias fear that 500 tribesmen will join the joint forces on the west coast to form the “Sana’a Ring” brigade, as militia leader Abdul-Malik al-Houthi expressed in his recent speech. to its terrorist elements.

The militias and their leader’s fear of a popular uprising in their areas of control escalated, as Abdul-Malik al-Houthi warned of what he called “the downtrodden elements”, describing those demanding services as “dupes”.
This came in a televised speech by Al-Houthi to a crowd of what the militia media described as the Sanaa dignitaries, who meet with Al-Houthi, coinciding with the Houthis’ growing fear of revolution in their areas of control due to the deterioration of the services and the limited situation of citizens.