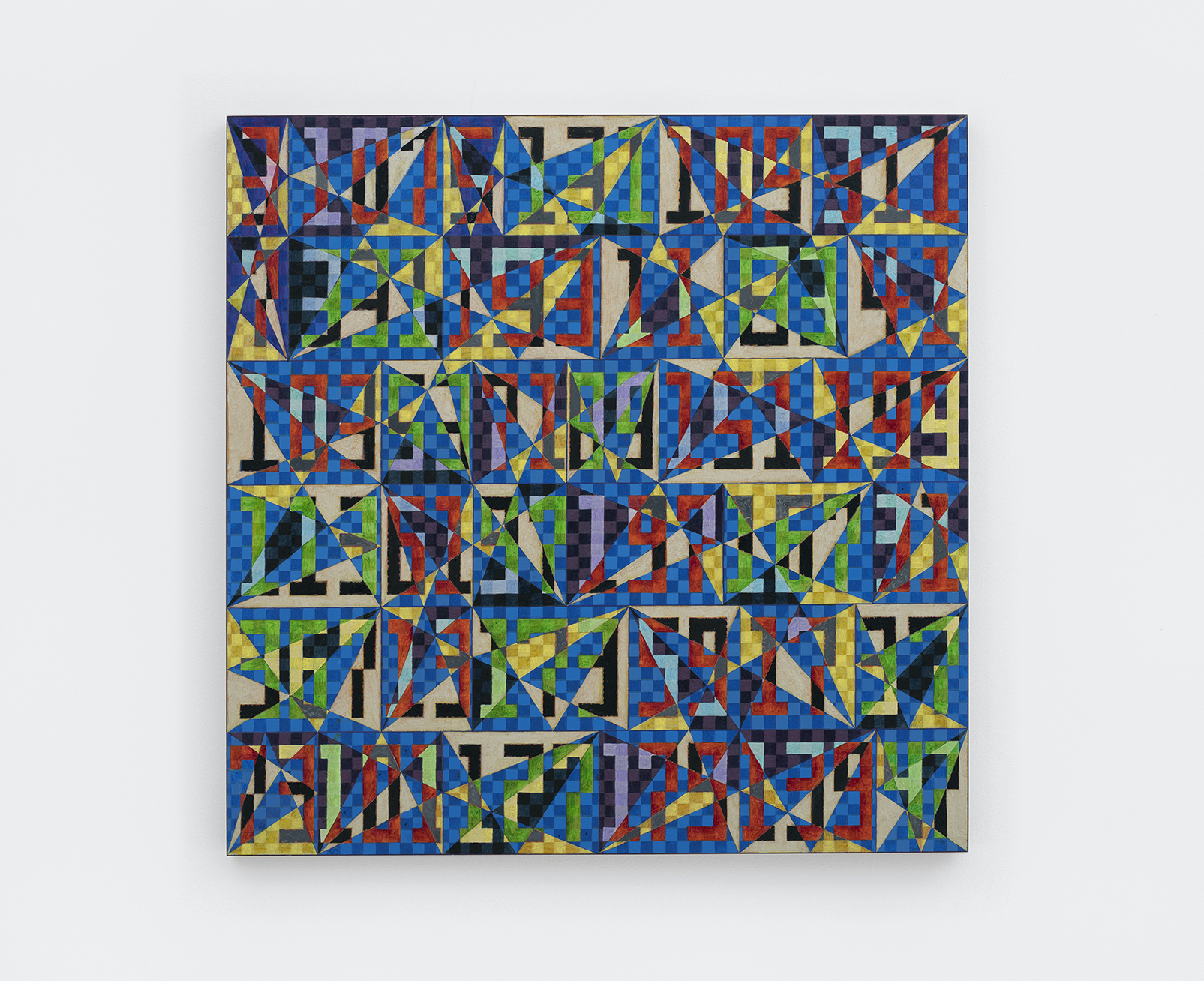 I first saw Xylor Jane’s work about 15 years ago in the flat files of Pierogi Gallery in Williamsburg, Brooklyn, and I’ve followed her ever since. She exhibits infrequently and I do not recall her work being included in museum retrospectives on the state of painting, abstraction, geometry, conceptual art or themes such as numbers, magic or the optical. I mention this because I think it’s fair to say that Jane – a unique figure in contemporary abstract art – has flown under the radar of the mainstream art world. As open-minded and inclusive as the institutions claim to be, they and their stewards still have many blind spots. Jane, who has expanded and pushed her meticulously straightforward methodology into delightful realms of blinding vision and arcane thinking like no other, is one of them.

Jane is a rule-bound artist who starts with a grid and a vocabulary of dots and solid geometric areas of color. She is the heir of Alfred Jensen, Agnes Martin, Roman Opalka, Sol LeWitt and Jess, but – most importantly – she is different from everyone else. Her lines take her to a strange and fascinating, beautiful and baffling, baffling and compelling place. These are some of the qualities that drove me to visit Xylor Jane: Second Return to Saturn at Canada Gallery (November 4 – December 22, 2022).

Saturn takes about 29 and a half years to orbit the sun. Although she is not yet 58 or 59 years old, Jane is on the second return and pondering the next stage, as the title of the painting “Third Saturn Return” (2022) indicates. What time do we think? What do we want to achieve in each of our Saturn phases?

Jane works in oil, ink and graphite on wood panels. The exhibit’s largest painting (90 by 41 inches), “Untitled (25 Nesting Prime Palindromes)” (2022), is a pyramid of color-coded numbers, with the prime palindrome 32323 at the top. According to the gallery’s press release:

Not only is 32323 a favorite of Jane’s (because it contains two twos and three threes), but it is also the number of days she will live when she is in the middle of her third return to Saturn in the year 2051.

Since each row is incremented by four digits, the original palindrome retains its position. The extra numbers form another palindrome, which is folded into the next row, 25 in all. The color coding complicates the way we see the painting, as our gaze moves back and forth between reading and looking, distinguishing and wandering, readability and illegibility – the hazy buzz of everyday life. The boundary between reading and looking, precision and vertigo, optical and tactile is constantly under pressure in Jane’s work. Beginning with a top-notch palindrome – something the viewer can easily enjoy – the artist draws the viewer into a territory of contemplation beyond human comprehension. This is where she takes me. It’s both unsettling and oddly comforting, though I can’t say why.

What takes this show – which is already more visually generous than most exhibitions – to another level is the way Jane has complicated her approach. “Untitled (25 Nesting Prime Palindromes)” consists of one system, fully visible to the viewer. In ‘Starling’ and ‘Love Beast’ (both from 2022), she overlaps a grid of numbers with a system of diagonals that both integrate and interrupt the numbers. The figure-ground relationship in the grid of “Starling” continues to shift, further complicating our perception of the painting. Finally, “Starling” is a “magic square” since the four numbers in the vertical and horizontal rows and both main diagonals add up to 34, but none of the numbers are repeated. It’s like a magic trick has been revealed, but everything is still inexplicable. Magic squares date back to the pre-Christian era in China. On the wall in Dürer’s “Melancholia” (1514) is a magic square in which the four rows and two longest diagonals always add up to 34. What connection does Jane make by using a grid with a different sequence of numbers that still add up to 34?

Mankind’s attempt to find an underlying pattern in the universe has haunted us since before we saw the stars as constellations and asterisms. We live in the midst of the clash of systems, from the digital to the ideological. Everything is under control and methodical, but Jane has no didactic intentions in these paintings. We see the ways in which she puts together the elements of the painting, starting with the grid, the choice of color and the careful application of dots that range from thick to miniscule. These are drawings in paint; she makes unadorned markings (dots, lines and geometric shapes) to capture something cosmic. The entries follow a set of rules that are not based on any known logic.

Many contemporary artists have rules and claim to work conceptually, but I think they are rarely interested in the mystical and illogical, in the pleasure that that way of thinking and seeing inspires. This is what holds my attention in Jane’s work. No other artist comes close to doing what she does the way she does it.

Xylor Jane: Second Return to Saturn continues in Canada (60 Lispenard Street, Tribeca, Manhattan) through December 22. The exhibition was organized by the gallery.