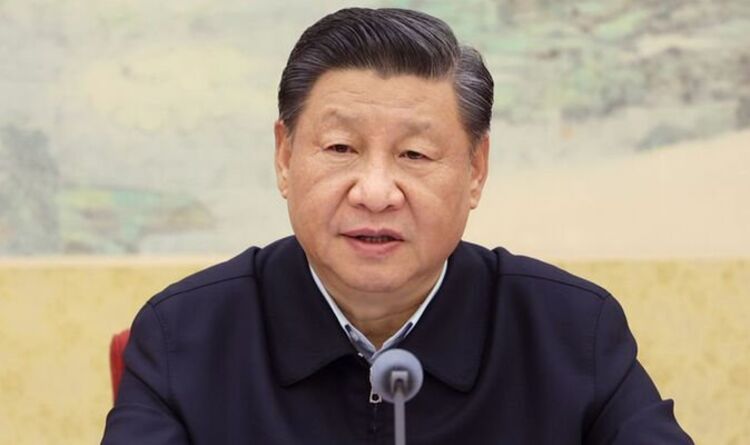 China faces losing hundreds of billions of pounds worth of trade with the European Union as businesses across Europe “rethink their activities in China as a result of Russia’s invasion in Ukraine”. The bombshell threat will rock Xi Jinping and the Chinese Communist Party, as their continued support for Russia comes under sustained economic pressure. During a summit between the top leaders of the EU and China yesterday, European Commission President Ursula von der Leyen underlined China’s economic dependence on Brussels.

She pointed out that a quarter of China’s global trade was with the EU and the US last year – compared to just 2.4 percent of trade with Russia.

Chinese President Xi Jinping and Premier Li Keqiang offered the EU assurances that it would seek peace in Ukraine.

Speaking to Fox Business, American Enterprise Institute senior fellow Zack Cooper said that there were “real downsides” to China’s alliance with Russia and that Beijing was starting to pay the price.

JUST IN: EU ‘lies’ savaged as Netherlands inflation explodes to 11.9%

However, he suggested that China will not listen to the EU, despite the threat of economic pain.

Mr Cooper, formerly of the Department of Defense, said: “I don’t expect any breakthrough but also not any breakdowns.

“China is going to continue to back Russia. There are huge costs for China in doing so.

“But if China was going to shift its position on Russia, it would have done so several weeks ago.

The EU told Beijing during the virtual summit not to allow Moscow to circumvent Western sanctions imposed over Russia’s invasion of Ukraine.

In response, President Xi urged the EU not to “tie the whole world” to the crisis in Ukraine and warned it could take decades to repair the economic damage caused by the war.

China overtook the US in 2020 as Europe’s biggest trading partner for goods.

In 2021, the trade continued to soar, with overall China-EU trade in goods reaching £586 billion (approximately $777 billion).

Prior to the invasion, both President Xi and President Vladimir Putin described the relationship between their two countries as a “no-limits” strategic partnership.