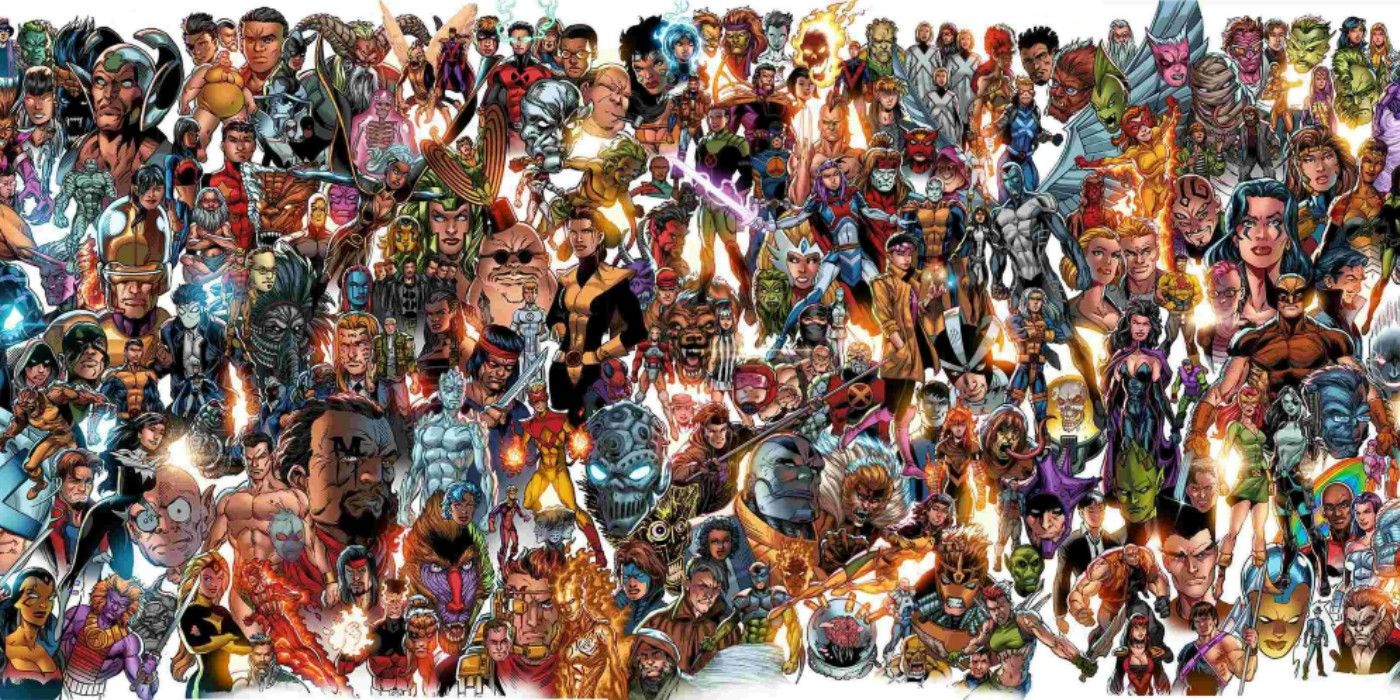 A great piece fan artartist Carl Broaddus’s never-ending “Mutant Icon Project” collects all known X-Men and Marvel Comics mutant in a huge ongoing collection. The X-Men are known for their endless array of evolving characters and costumes, plus new mutated heroes and villains constantly popping up, making art like the “Mutant Icon Project” a series that may never end.

Although some Marvel hero costumes have remained relatively similar over the years, such as the main core of the avengers cast, the X-Men have massive costume changes for almost every era they exist in, meaning the “Mutant Icon Project” will always have new looks to take inspiration from. Since the critically acclaimed 2019 relaunch of the X-Men franchise by Jonathan Hickman House of X / Powers of X Not only are there a slew of newly introduced mutants such as Somnus, Escapade, and the Arakkii mutants, but there are also long-dead mutants that are being revived, such as Thunderbird, Skin, and Synch. Marvel Comics first introduced mutants to their universe in the 1963s X-Men #1 by Stan Lee and Jack Kirby, and since then the X-Men have become one of the most beloved superhero teams in the world, undergoing endless reboots, tweaks and evolutions.

utilities, Carl Broaddusa talented artist who also illustrated incredible fantasies of lesser-known mutants’ Hellfire Gala looks, the “Mutant Icon Project” began in 2019 after being inspired by Hickman’s massive relaunch and the hopes Krakoa brought to the X-Men books. Initially, the “Mutant Icon Project” started out as a much more complicated project, a way for Broaddus to analyze X-Men data to find interesting insights since their debut in 1963, but in the end he just decided to continue the project and focusing on creating “cute icons” of the legendary X-Men, who have now created a total of 450 mutated icons. Writing a fascinating article in Medium about the “Mutant Icon Project,” Carl Broaddus had this to say about the project’s origins:

So at this turning point, I thought it was interesting to look back at who made up the X-Men in the books from 1963 to just before House of X, and how they were called to serve in the various X-books. To do this, I analyzed 56 years of X characters and narrowed that list down to 28 mutants based on a balance between the number of X appearances, longevity, and my personal experience reading the books. I’ve excluded non-mutants (Longshot, Warlock), characters who are almost exclusively in splinter teams, and characters who have yet to get into a core team.

Hard to believe I’m at 450 mutants in my 400+ Mutant Icon Project. To celebrate, let’s take a look at the mutants of #Arakko, mounted! Largely the scale of the new mutants introduced in recent years, this diverse cast of characters is easily the most fun to draw! #xmen pic.twitter.com/LdqwPlMelD

Two additions to the 400+ Mutant Icon Project & a Cypher redesign (all because of that one Valerio Schiti panel… you know). I can’t believe it took me so long to sign Amanda Mueller… bring her back! #xmen pic.twitter.com/y7yXQ0O6qr

The 400+ Mutant Icon Project can’t end if the look continues to evolve! Some get new costumes. Some new hair. Some die out and are replaced by their older counterparts from further into the future who were killed by their younger versions to prevent a possible future or something. #xmen pic.twitter.com/po1UrCh1NE

It’s been a while, but I’ve got some new additions to the 400+ Mutant Icon Project (these five make 442)! Then view this range! Some new, some old, some forgotten, one Draco related? PS, I love the Escapade design. Hoping she’s destined for great things! #xmen pic.twitter.com/4WyRDF2Cn7

Mutants that have been around for decades, like Nightcrawler or Charles Xavier, have undergone so many character redesigns that you could create an entire art project only exploring the changing aesthetics of Marvel’s Merry Mutants. While Broaddus’ project began by creating “icons” of the most classic, legendary X-Men characters, in recent months he has expanded the compilation to include lesser-known mutants such as Black Womb (Amanda Mueller), Brutha Nature and the Age of Apocalypse villain Sugar Man. He has also started adding completely new characters, such as the brand new transmutant Escapade that debuts in Marvel’s Voices: Pride 2022 #1, as well as assembling quite an extensive set of the newly introduced Arakkii mutants. Broaddus’ icon art, being faceless, is almost 8-bit recreations of the X-Men surprisingly detailed, with beautiful visuals added for little things like Warlock on Cypher’s arm, Nekra’s unique costume, and Nightcrawler’s new Legion of X clothing.

as the X-Men continue to evolve and grow, Carl Broaddus’ brilliant and adorable “Mutant Icon Project” will expand even further, and unless he decides to quit one day, the only thing that can stop it is fan art series may end Marvel Comics yourself.