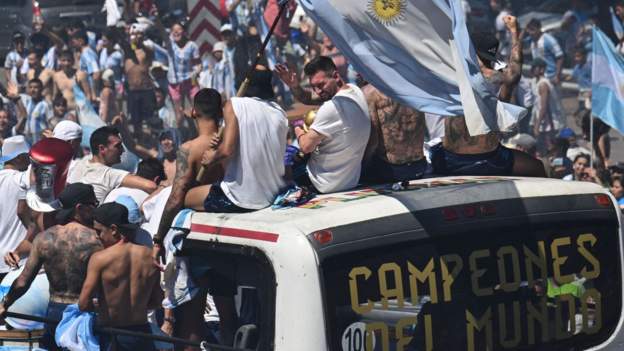 Argentina’s World Cup winners had to forgo an open-top bus parade in Buenos Aires and instead take a helicopter ride above the millions of ecstatic fans celebrating in the streets.

The team showed off the trophy at the start of a planned eight-hour journey.

But the festivities on busy roads became more chaotic, forcing a rethink.

“It was impossible to continue on the ground because of the explosion of joy,” presidential spokeswoman Gabriela Cerruti tweeted.

Videos on social media appeared to show fans jumping onto the top deck of the bus transporting the players at one point as it passed under a bridge, causing one fan to fall off.

The Argentine government declared Tuesday would be a national holiday in the South American country after Lionel Messi and his teammates defeated France in Sunday’s final.

According to local estimates, about four million people lined the streets of Buenos Aires.

After returning home from Qatar in the early hours of Tuesday morning, the players left the Argentina Football Association (AFA) training complex for a 20-mile journey to central Buenos Aires at 11:45 local time (14:45 GMT).

The journey would end at the capital’s iconic Obelisk monument, where hundreds of thousands had gathered later that day and created a festive atmosphere.

But security forces prevented the bus from continuing to Plaza de la República – the public square where the Obelisk stands – after the festivities became too chaotic.

“A thousand apologies on behalf of all champion players. [Such] too bad,” tweeted AFA president Chiqui Tapia.

With the majority of the jubilant fans wearing the national team’s blue and white colours, Plaza de la República was a sea of ​​color as they waited for the squad to arrive.

Captain Messi and the late Diego Maradona – another iconic Argentine player, captain of the 1986 World Cup champions and regarded as one of the greatest players ever – banners were held aloft as other fans played instruments or climbed lampposts.

Hundreds of fans lined the streets, many riding scooters and running behind the bus on a highway, as the parade made its way to the Argentine capital.

“It’s crazy, it’s incredible, it’s the best thing that can happen to you in life,” said 25-year-old Matias Gomez, one of those in attendance.

“It’s a huge joy to see all these happy people, all together, one with the other, holding hands, hugging, kissing. We are all one today.”

Paris St-Germain striker Messi, who captained the side and cemented his place for many as the greatest footballer ever by winning the World Cup, was in the middle of a group of the side on the top deck.

Earlier on Tuesday, he posted on Instagram showing off waking up next to the trophy.

Argentina has been in celebration since Sunday’s dramatic penalty shootout victory against France in Qatar, which gave the country its first World Cup win since Maradona lifted the trophy 36 years ago.

Messi, 35, finally fulfilled his World Cup dream as La Albiceleste took their third crown in one of the biggest finals in the tournament’s history.

Get the latest results and goal alerts for every team at the Fifa World Cup by downloading the BBC Sport app: Apple – Android – Amazon

Get your daily dose of Fifa World Cup reaction, debate and analysis with World Cup daily on BBC Sounds