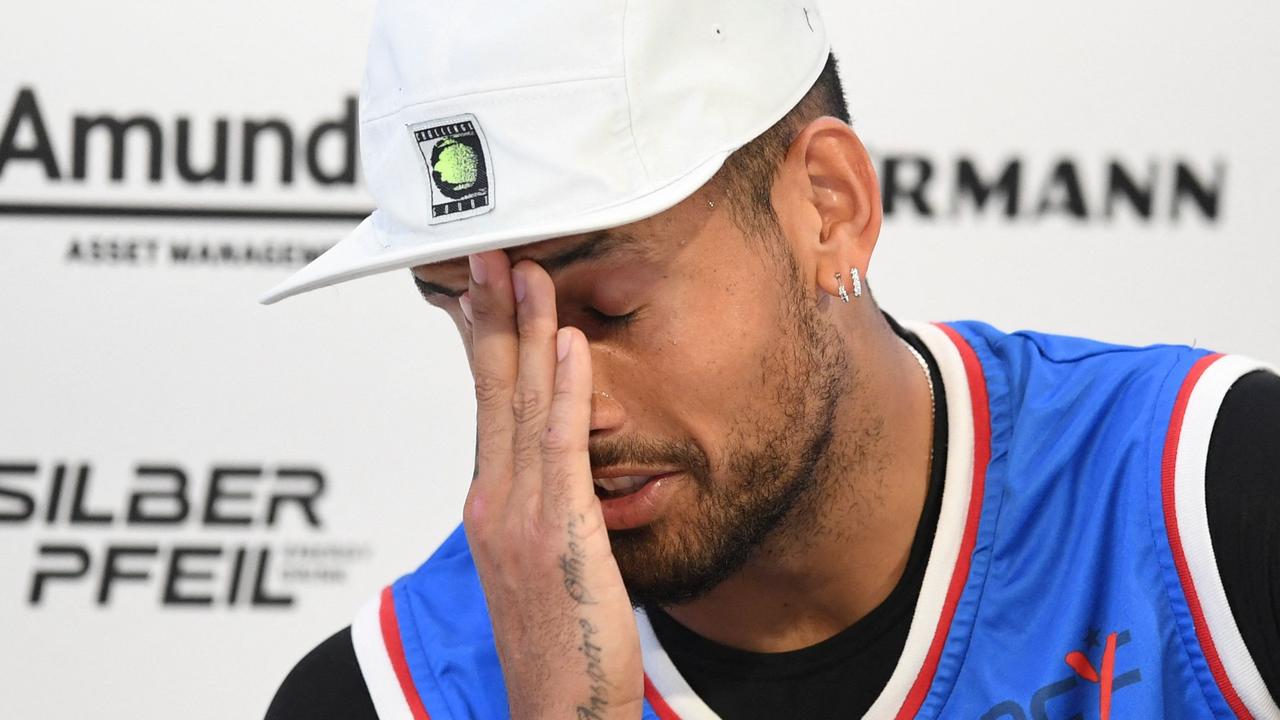 Nick Kyrgios plays the victim again, but there’s one simple truth he refuses to accept after yet another grouchy outburst.

Nick Kyrgios was at his hypocritical best after a wild five-set win in the first round of Wimbledon, abusing referees and linesmen and then playing the victim during his post-match press conference.

You can read all about his antics and complaints here and here, but one interaction with a reporter — which we’ve outlined below — after overcoming Paul Jubb provided the most illuminating insight into why Kyrgios thinks the world is against him.

“Referees take it, linesmen take it, a lot of these people take it,” the journalist added.

Kyrgios: “However, it goes deeper than that. If I lose a tennis match and it comes down to a phone call, they don’t get mistreated on social media like I deal with. My girlfriend handles hate messages, my family handles hate messages, I deal with hate messages. For example that time in Miami where (umpire) Carlos Bernardes did that and turned the whole game. Was he dealing with the consequences? I’m still dealing with that, but they’re just there like nothing happened. They’re there refereeing again, umpire, but to me, the hate messages, they carry a lot more weight than just that. That’s what people don’t understand. It’s not just ‘He made a bad decision’ and I’m just mistreating the referee. I’m frustrated. It’s like if I lose this game you have no idea how much abuse I have to go through where the umpires don’t have to go through anything. What are they going through?”

News reporter: “Do you have any sympathy for them, though?”

Can you hear yourself, Nick? The only thing that doesn’t add up are those last three words.

Kyrgios believes he has the right to abuse referees and officials whenever he wants, but spectators are not allowed to criticize him at all.

Remember, this is the man who encouraged the Australian Open crowd in January to be as rowdy as possible as he and Thanasi Kokkinakis continued their inspired run to the doubles title. Then he would berate referees for not checking fans in Melbourne Park. Go figure.

You can’t have it both ways.

Make no mistake, the avalanche of social media abuse that athletes – including Kyrgios – are subjected to is disgusting. It’s even more unforgivable when it extends to partners and families.

The alleged racist mockery that Kyrgios lashed out at a tournament in Stuttgart earlier this month is deeply disturbing and has no place in society, let alone tennis or any other sport. The Canberran rightly speaks out against such treatment and is to be commended for raising awareness of its damaging impact on mental health.

But what Kyrgios doesn’t understand is that he spits out the same behavior he complains about when he takes the field.

Kyrgios has been making life hell for umpires and linesmen for years. Whether it’s a vile Miami meltdown in March or a blast at officials at the Australian Open every summer, the Aussie star is part of the problem he’s been whining about.

Saying “refs don’t have to go through anything” when they’re at the end of one of his savage verbal sprays is like gaslighting. How would Kyrgios know what they’re going through after he’s done with them? Does he give them a questionnaire to fill out after every name-calling?

Imagine going to work, doing your job to the best of your ability and being yelled at, undermined and humiliated in front of thousands of people.

Kyrgios tries to justify that his problems are bigger than anyone else’s – and gives him an excuse for acting like a brat – just don’t wash. Yes, his profile means he’ll run into obstacles your average Joe doesn’t, but does he have to act like a jerk? Federer not. Not Nadal. Ash Barty certainly not.

The 27-year-old refuses to accept the most basic premise behind how the world sees him — that he wouldn’t be subjected to abuse and taunts from the public if he treated everyone around him with the respect he claims he deserves.

Don’t abuse umpires, don’t insult the linesmen, hardly ever hit balls with your racket during a tantrum and people won’t have much of a reason to “respect” you.

It’s a simple truth, but unfortunately there’s one that Kyrgios can’t swallow.