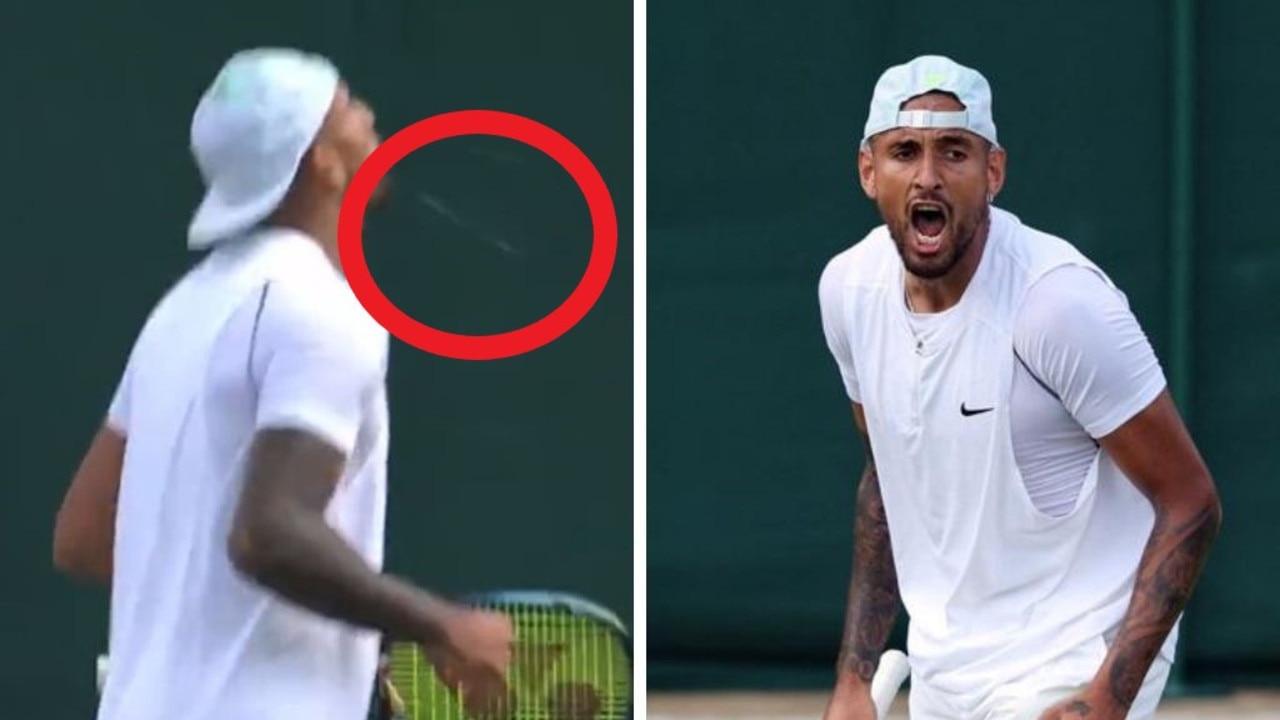 Nick Kyrgios completely collapsed during his opening match at Wimbledon, insulting a linesman before taking his anger out on the fans.

A fiery Nick Kyrgios narrowly survived a five-set scare as he battled through his first round at Wimbledon.

The Australian tennis star defeated Britain’s Paul Jubb 3-6, 6-1, 7-5, 6-7, 7-5 in a match that stood out more for his amazing sprays at the umpire and a linesman than the tennis itself.

Kyrgios labeled a straight judge a “snitch” who “has no fans” in the opening minutes of the highly charged draw – then continued with his comments to the referee and some British fans as the match progressed.

At one point, when a linesman spoke to referee chairman Marija Cicak, the Canberran said to her: “Has anyone come here today to see her speak? Not one person. I know you have fans, but she has none.”

Kyrgios dedicated the win to the “noisy” audience members who criticized him during the match.

“I thought I was going to go there for a while and it would have been hard to take,” he said.

“There were a few people who weren’t shy about criticizing me – that one’s for you.

Kyrgios admitted in his press conference afterwards that he spit at spectators who had caused him grief after match point.

“Towards one of the people who disrespect me, yes,” he said when asked if he spat at the crowd. “I wouldn’t do that to someone who supported me.”

Asked about his temperament during the match and whether he would consider a career as a commentator after retiring, Kyrgios said: “I just talk a lot.

Midway through the third game of the opening set, the battle of words between the Aussie and the officials began. Kyrgios had grown frustrated with people talking between points and his anger boiled over as a linesman approached the chair umpire.

At the switch, the court’s microphones picked up Kyrgios and called the linesman a “snitch” who “has no fans”.

British broadcaster Piers Morgan took aim at Kyrgios on Twitter a few times during the match. “Kyrgios is so ad**k,” he wrote, before going further when he called the linesman a “snitch”.

The sometimes volatile Aussie lost it completely after his serve was broken and he knocked a ball out of the Court 3 stadium. He was given a ball abuse warning for the act.

Kyrgios’ frustration took over as a level-headed Jubb claimed the opening set 6-3 as fans watched from the edge of their seats.

However, in standard Kyrgios fashion, the Aussie completely turned the script around in the second set by making it 6-1.

His dominance was fully apparent as he broke Jubb’s serve several times and dominated behind his own.

As the second set began, the Aussie motivated himself after each point won, but it didn’t stop the chatter during the substitutions between him and the chair umpire.

Kyrgios’ words to the linesman continued after a check on one of his serves. The Aussie was heard to say she was “the worst I’ve ever seen” and told her to “get off the court” when her appeal was turned down.

But he lost his stranglehold on the match in the fourth set, losing a tiebreak before launching in a spray to the umpire over a let call.

It was more of the same in the fifth set, when Kyrgios lost a chance to serve out the match – while Jubb broke back.

But Kyrgios’ experience shined through as he broke Jubb’s serve again and won the fifth set 7-5.