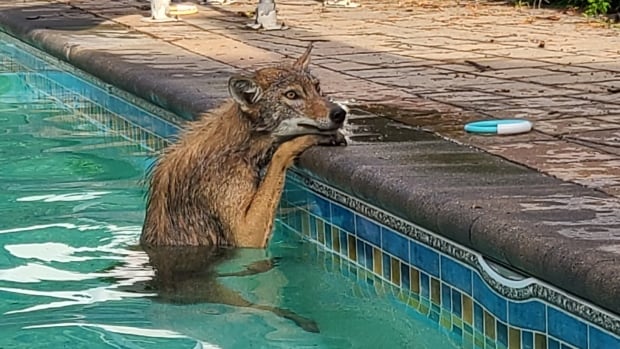 It was about 7:30 a.m. Saturday morning when Nicole Van De Wolfshaar heard a racket outside her home in Glabar Park.

Van De Wolfshaar has been without power since a severe storm swept across Ottawa last Saturday, boiling water on her barbecue to make a cup of coffee.

“Do you know that when there’s a predator around, the crows always make a huge noise?” she said. “I went out to see what was in the backyard.”

She didn’t see anything right away, but then walked to her pool and came across it—a coyote that not only took a dip, but struggled to get out.

Van De Wolfshaar said she wanted to help the coyote, but pushing him out didn’t seem like the safest plan. Instead, she tried to lure it to the pool steps so it could get out easily.

It didn’t go as smoothly as she’d hoped.

“But it looked tired.”

Van De Wolfshaar said she was also concerned about what to do if the wild animal drowned in the bottom of her pool.

“What do you do when they have a drowned coyote in their backyard?” she wondered.

In the end it was a happy ending. The coyote ran to the back of her yard and crossed her neighbor’s property, she said.

Van De Wolfshaar said she then posted the photos to a nearby Facebook group as a respite from anyone complaining about the lack of electricity.

Van De Wolfshaar got her power back later Saturday, and while the week-long outage was annoying, she said she couldn’t really complain because of all the support from friends and family.

“We haven’t had hot water, we can’t cook, we can’t heat anything except on the barbecue,” she said, adding that she was showering at friends’ houses and others brought her meals and did her laundry.

“It’s annoying, but it doesn’t bother me,” she said before the lights came on.

Hydro Ottawa’s lack of clear communication was most frustrating, she added.