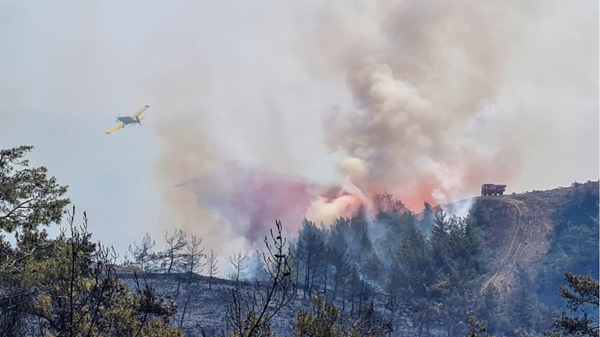 Firefighters tried to control a wildfire in southwestern Turkey from land and air on Friday, with flames raging for a third day as strong winds fanned flames over a mountainous area.
Scenes of burning forests near the Aegean resort town of Marmaris have raised fears of a repeat of last year’s fires that destroyed some 345,950 hectares across the region.
Reuters footage showed smoke rising from the hills as the fire spread through forests in a sparsely populated area, while helicopters and jets of water were dropped on flames throughout the day.
Police assisted firefighters with water cannons in an attempt to extinguish the blaze, which started around 8pm (1700 GMT) on Tuesday.
Interior Minister Süleyman Soylu said one person had been arrested and confessed to burning down the forest out of frustration over family problems.
Health Minister Fahrettin Koca said late Thursday evening that 29 people were injured in the fire and two people are still being treated in hospital.
Officials said about 274 people were evacuated as a precaution.
Scientists say human-induced climate change is making heatwaves more frequent and intense.