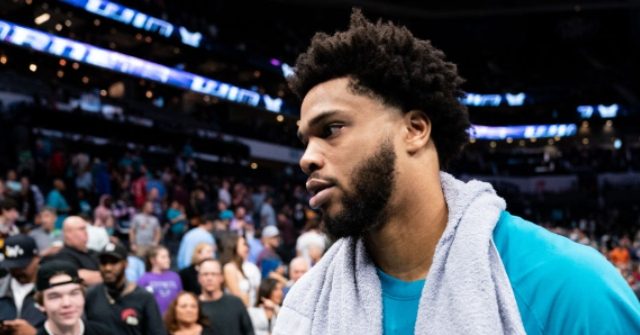 After the arrest of Charlotte Hornets attacker Miles Bridges on Tuesday, his wife posted images of the injuries she claimed sustained at his hands.

She said she “can’t shut up anymore,” Mychelle Johnson posted a series of photos showing the bruises, scrapes and bloody scrapes she believes came from an altercation with her husband, Outkick reported.

The photos were taken in a hospital emergency room and Johnson included a scan of the discharge paper stating that the injuries were the result of “physical abuse by male partner.”

The hospital records report that the injuries included: strangulation, concussion, fracture of the nasal bone, contusion to the ribs, multiple contusions and a neck strain.

In her Instagram post, Johnson exclaimed: “I hate it has come to this, but I can’t keep quiet anymore. I’ve allowed someone to destroy my home, abuse me in every way and our children for life. to traumatize.”

She also claimed that “people around” the player urged her to keep quiet about the abuse she claims she has suffered, insistently calling them “unethical”, “immoral” and “really SICK”.

She continued, adding, “As scary as this is for me to do, it’s time I stood up for myself. I will no longer be silent to protect others, because I value myself and my children more than anyone’s ‘image’.”

Bridges turned himself in to the Los Angeles Police Department on Wednesday and has been charged with domestic violence. He was released shortly after paying $130,000 bail.

The 24-year-old was arrested a day before the NBA free agency and just before he was about to sign a contract for $100 million or more.

The Hornets have said they will not comment until there is more information on the matter.