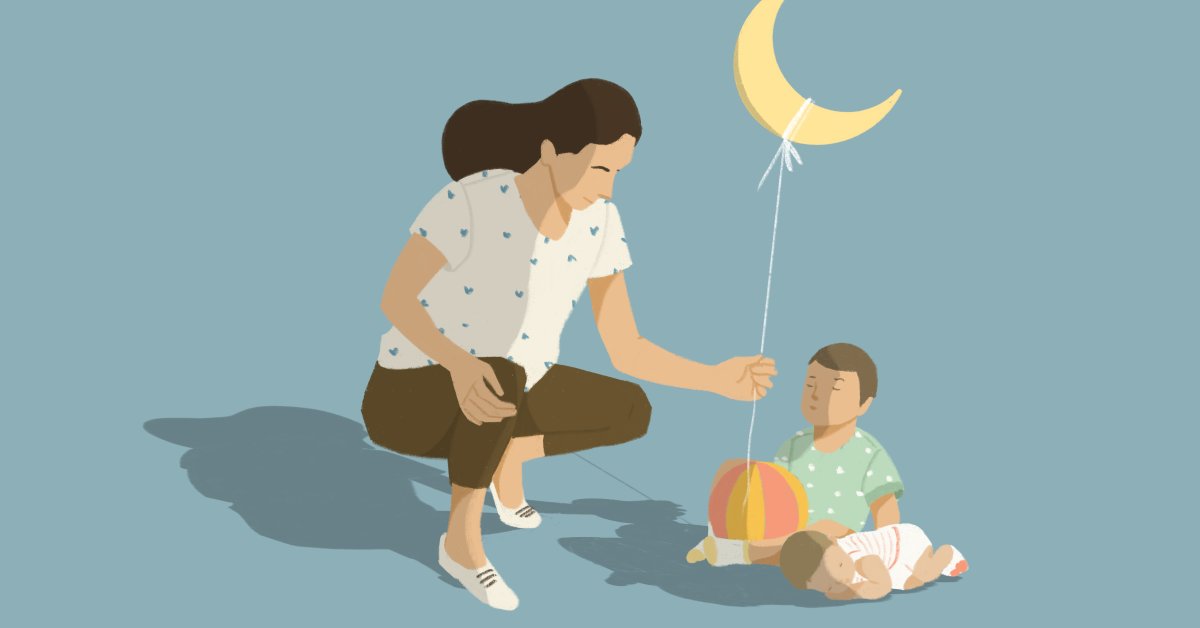 lIn early March 2020, when I was five months pregnant, I changed my 2.5 year old from a crib to a toddler bed. He was going to be a big brother and change was inevitable, although I was mostly tired of lifting him over the railing, which required a bending motion that encouraged my second-trimester heartburn. He’d always struggled with transients, hadn’t slept through the night until nearly 2am, so I was ready for a fight, and determined not to let my own feelings about the seismic shift he didn’t know was coming influence my decision. . My husband and I would be firm and kind, and our son would eventually learn – if it took a few nights of screaming and tears, we would suffer. This was how we got rid of his other worries, like clipping his fingernails and dropping him off at daycare, the kind of short-term pain, long-term gain that helped us all grow.

Then, of course, came the pandemic. Instead of tucking him in and leaving the room, I found myself sleeping on his floor night after night, getting more and more uncomfortable as I approached my due date, but convinced that he needed me and that it was for the best. I took a similar approach to television and treats. After a strict one day rule for fruit snacks, I started saying yes when he asked. They brought him joy, and who was I to deny him that at a time when he couldn’t go to school, see his grandparents, or go on play dates? I’d been worried about adding a sibling, but now his whole world was turned upside down, just like mine. I promised myself that when this was over, I would return to the discipline and structure I knew helped him thrive. For now, it could be a pandemic band-aid to let my toddler win our battles.

Read more: How I Lost Myself To Motherhood

Flash forward to 2022. We are still in a pandemic and my daughter, born in June 2020, has entered her own toddlerhood. Last night she woke up at 3 am, crying because she wanted to watch a show. Coincidentally, I’d also been up much of the night reading about the Supreme Court’s leaked opinion and how she could lose her basic civil rights. About climate disasters that will have devastating consequences in her lifetime. About racist manifestos and mass shootings. On a new spike in COVID-19 cases. About 19 students and 2 teachers were shot at a school in Uvalde, Texas.

When I went to her, my instinct was to pamper, to enjoy. I wanted to say yes to another hug, a midnight book, to rock her all night long in the glider, her little hands clutching my hair. Look what she loses. Why don’t you give her the present now? Why don’t you let her have these little things? Over the past two years, I’ve said yes to hundreds of extra desserts, at least 20 new Hot Wheels cars from the dollar bin at the drugstore, another 20 minutes on the playground that inevitably lead to naps when we’re thrown off our schedule. I’ve always known better, but in those moments I just wanted my kids to be happy. Then I thought of the cavities the dentist had found in my now five-year-old son’s teeth, because I stopped fighting him to use gummy vitamins and flossing late at night.

It’s one thing to give in to a toddler’s desires in unprecedented times, but what are we to do when there’s no end to the unknown? I’ve been in my daughter’s crisis mode all my life, but my adult feelings about social breakdown don’t match what my kids need from me. Little children need to be fed and kept away from danger, they need to test boundaries and learn, they need to feel love. We are the ones with nuanced, complex emotions about global events. We are the ones processing our guilt, fear and helplessness. Sure, it’s important to acknowledge my small children’s feelings and help them work through them, but there’s the danger of projecting my own disappointments, or even successes, onto them. Yes, my toddler is frustrated. But it’s not because of Alito’s draft decision on… Roe v. Wade– it’s because she’s 22 months old and doesn’t want to go to sleep.

As a parent, I have to recognize that doing good by my kids doesn’t always equate to what makes me feel a little better about the world that burns around them. This has always been a truth about parenting, but as the flames draw ever closer, we struggle with increasingly complicated feelings about the legacy we will leave behind. I’m trying to remind myself it’s okay to disappoint my kids, it’s okay to… parent them. The future is coming whether they can watch TV at 3am now. everything.

“It is night and at night we sleep”, I said to my daughter last night, as she demanded Daniel Tiger† I gave her a hug, both to calm my nerves and hers, and set her down. “I hear you,” I said through her tantrum until she calmed down and I could go back to my own bed. She won’t remember the tears, but hopefully this lesson will stay with us both.