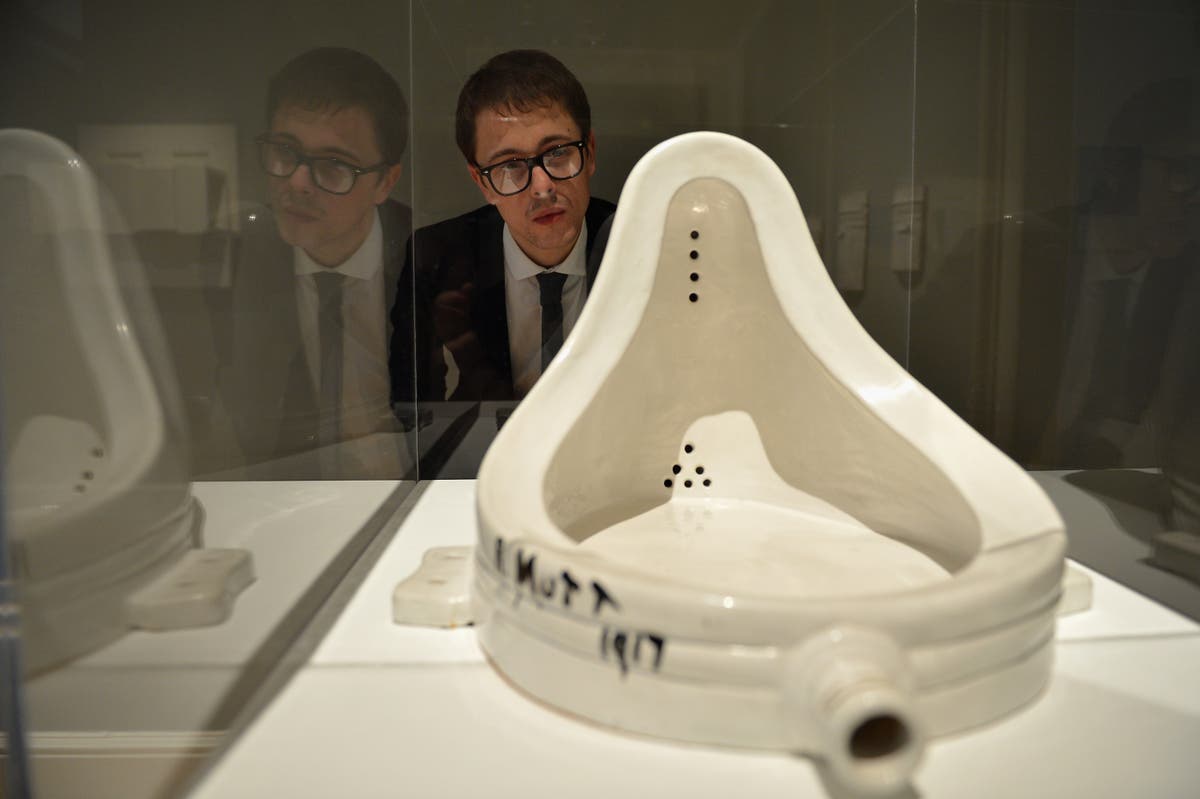 Art is a weird industry. It’s one of the few disciplines where people get totally outraged at the implication that they may not know everything about it, even if they have no real interest in it.

People will argue that a particular piece of art is meaningless, or pretentious, or stupid, with all the confidence of someone walking up to an orthopedic surgeon and telling them it’s crazy that there are so many different names for bones. “Hand bones, leg bones, what’s the difference?” they cry. “Boats are just sticks that keep our meat from sloshing. Why do you jerks always have to make everything so complicated?”

Nothing annoys people more than modern art, and no one annoys modern art more than conservatives. It feels like every few weeks a right-wing influencer has a hot take on a piece of abstract expressionism or a ready-made sculpture, declaring that they invented it, that they cracked the code. Modern art is a scam and they are genius for realizing it.

Knowles just rode in the tail of a similar one series of tweets that had gone viral a few days earlier, in which a “classic educator” criticized Marcel Duchamp’sFountain (1917) – essentially a urinal turned on its side and signed with a pseudonym – stated it was not “real art” and said it was “time to take back the culture from degenerates”.

This especially upset people, not least because the use of the word “degenerate” recalled the famous 1937 “Degenerate Art” exhibition organized by the Nazi Party to mock similar works.

About a week earlier, Prince William found himself at the center of a related debate after claiming that while he loved the Italian Renaissance, modern art had kept him from studying art history, often falling asleep while lecturing on the subject. You can probably go on Reddit right now and find five or six threads full of armchair experts congratulating each other for “thinking” that the art industry is a money laundering conspiracy for rich people.

I actually sympathize with the right’s stance on this, at least to an extent. My PhD looks at parallels between literature and examples of what you would call ‘modern art’, and I taught and lectured on the subject for several years, but when I was younger I was a card-carrying member of the ‘my four-year-old could paint that society. I only forced myself into art in college because I got into a relationship with an art student who was a lot smarter than me, and I had a bit of a complicated feel about it.

At that time, while doing my best to educate myself on a subject that I was not really interested in before, I learned three things that made me change my approach to modern art. The first was that “modern art” is a rather useless term and people use it to refer to works spanning over a hundred years. There is a real irony in the fact that when some conservatives say we should reject modernism and return to the ideals of the past, they are often talking about work that predates the First World War. It’s also quite satisfying to know that artists like Marcel Duchamp are still putting themselves in the shoes of the same people they were in the 1910s.

Second, what people call “modern art” is largely conceptual. The reason so much of it is hard to parse is that most of it is really just a proof-of-concept of an idea. Most artists don’t try to create something that is visually appealing or lifelike, because why would they? We came up with those techniques hundreds of years ago, and besides, we now have the Internet. If you want to see what a naked person looks like, you can just google it.

Rather, it’s easier to imagine a piece of so-called modern art in the same way as putting a petri dish under a microscope, or a data readout, or the prototype for an invention. It won’t mean much to you unless you do the legwork first.

And that brings me to my third, and perhaps most crucial point: No one is asking you to learn — or talk — about art. It’s okay to just not understand something, without calling it fake, a scam, or illegal in any way. It’s a new concept in the information age, but no one expects you to be an expert or even have an opinion on everything.

I think that’s part of the reason modern art is such a slam dunk topic of conversation for conservatives. Understanding modern art requires going against your instincts and telling yourself that while this supposed “sculpture” just looks like a urinal, there’s actually a lot more to it. But to understand that, you must first get out there, read a few books, and put aside your initial feelings of disgust. Would you rather do that, or would you rather just deal with your gut and hate the thing instead?

Conservatism is enmeshed in that need for so-called “common sense” solutions to complex problems. That is why the core message of Brexit fit on a bus. That’s why the anti-trans movement is so hard to fight. That’s why Trump absolutely killed it on Twitter. Modern, conceptual art symbolizes that need for nuance and depth that modern conservatism rejects. “We’re tired of the experts”, remember?

Likewise, conservatism is deeply suspicious of “modernity” as a concept, even if that so-called modernity predates the founding of Northern Ireland. It fetishizes more traditional art forms, just as it fetishizes everything from the past (even if their nostalgic understanding of the past doesn’t quite match history as it happened). Modernity is a threat to those traditions; a sign of an evolving tomorrow rather than a perfectly preserved yesterday.

Art is difficult. You can take it or leave it, but if you’re going to take it, at least try to take it seriously. Rather than relying on the idea that an entire industry full of experts is trying to trick you for some unexplained reason, perhaps you can take an extra second to entertain the idea that there may be things in this world that you don’t fully understand yet. don’t understand, and that instead of getting mad about that, maybe it would be nice to sort them out.