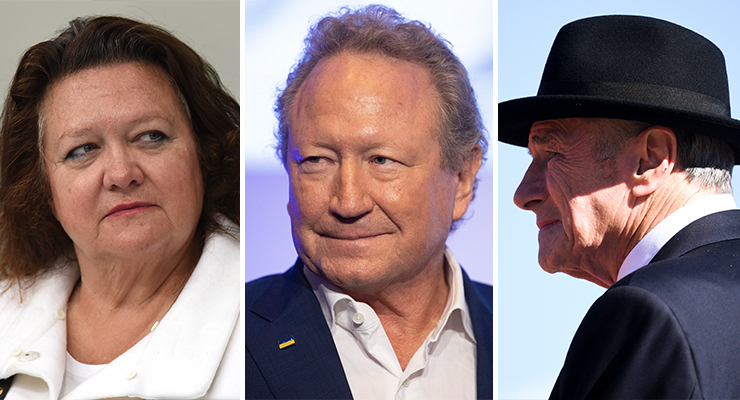 While some of the country’s wealthiest are investing in minerals critical to renewable energy technologies, others are still obsessed with fossil fuels.

In Perth, the city’s three leading billionaires — Gina Rinehart, Kerry Stokes and Andrew Forrest — indulge in a bit of financial leadership that says a lot about Australia’s energy transition, as well as the negative or positive role the super-rich play in it. .

Media reports over the weekend suggest iron ore billionaire Forrest likes the look of Chalice Mining’s Julimar world-class nickel, copper, platinum, palladium, gold and cobalt prospect northeast of Perth, and is trying to get his hands on a sizeable chunk held by former chairman Tim Goyder. Goyder stepped down as chairman of Chalice 14 months ago and sold $30 million in company stock midway through the year after buying a home in the exclusive Peppermint Grove for $17 million.

Chalice’s Julimar prospect has tremendous potential in a world of accelerating renewable energy investment. A mass strike in Gonneville has revealed the world’s largest find of sulphide-nickel this century and the largest discovery of palladium, platinum and gold (called a 3E combination) in Australian history.