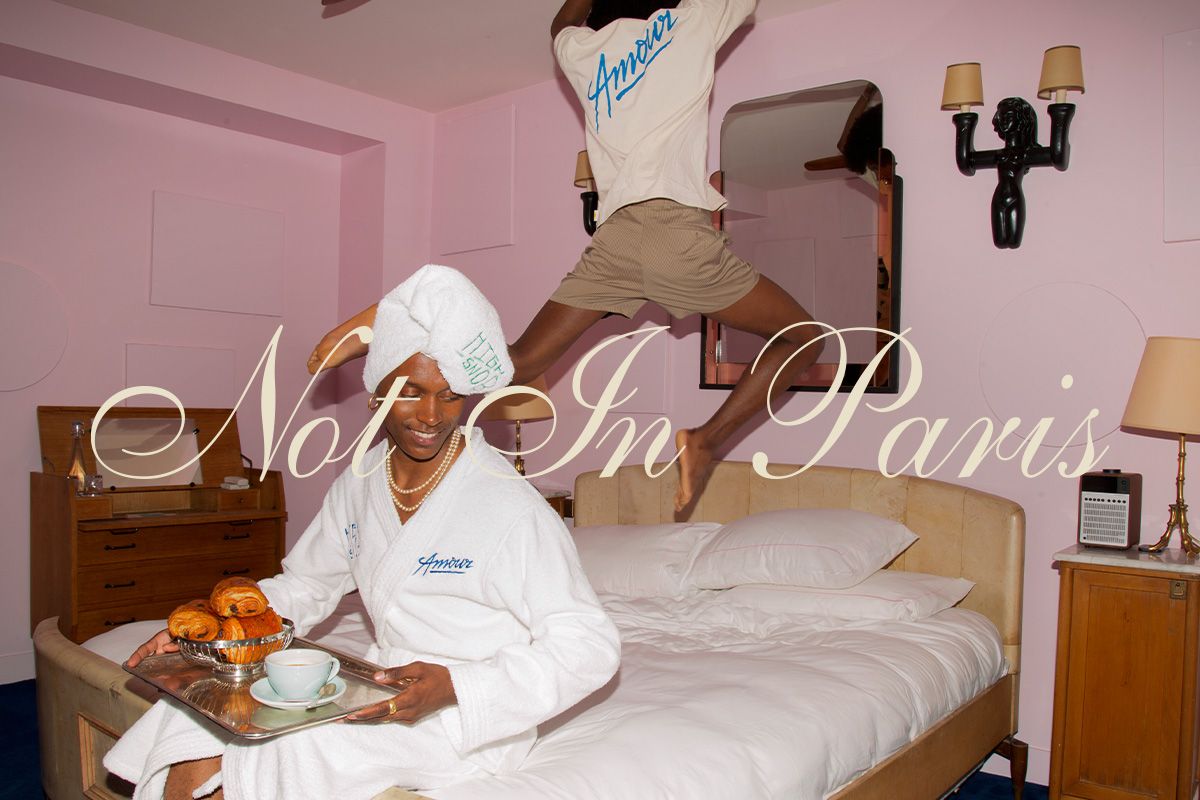 The 4th edition of Not In Paris is finally here. With over 20 brand collaborations and exclusive content, this is our biggest yet. Discover the series here and shop the collection here.

“I love to create spaces, spaces for me are art,” André Saraiva, the co-founder of Hôtel Amour, told Highsnobiety via email. If you’ve had the pleasure of walking into one of its spaces and experiencing its charm, it shouldn’t come as a surprise.

Saraiva is an artist in his own right, starting as a graffiti artist in the 90s where he met his alter ego Mr. A would spray across the city and eventually worldwide. The decor in his infamous hotels reflects in many ways his street art and subsequent gallery work: it’s unpretentious, experimental and has a lot of pink.

This is no coincidence: “I’ve always wanted to live in one of my drawings. To open a door to it and go in,” he says.

The hotel fulfills this fantasy to some extent and much of it is decorated with items from his personal life – inside you’ll find his works of art that needed a home, the furniture from the Paris apartment he sold to move into the hotel, and a variety of pieces he picked up at vintage markets. It makes it a huge personal space, something that can’t be said of many hotels. He says: “When I’m in Paris, I live in the hotel. For me, it’s my home, and I want people to feel the same.”

This isn’t a typical hotelier’s approach, but that’s partly because Saraiva isn’t. The 50-year-old entered the industry without setting up a hotel before, which he says helped him treat its creation as a blank canvas.

Like all good ideas, Hôtel Amour was born after a few drinks. During a dinner at Thierry Costes’ house, hosted by Rirkrit Tiravanija, the idea of ​​creating a hotel arose. When the subject came up, the room was ablaze with ideas they discovered could be realized through a hotel Costes’ uncle had for sale.

Those at the table, which was filled with creatives such as Mathias Augustyniak and Michael Amzalag of M/M, the artist Philippe Parreno and the gallery owner Edouard Merino, planted the idea for Hôtel Amour firmly in Saraiva’s head.

“The next day I called Thierry Costes about seeing the hotel. I also called the artists, but when they were sober again I realized that no one had the time or the interest to build a hotel anymore. But nothing could stop Thierry and me,” he says.

Finally, restaurateur and friend Emmanuel Delavenne joined the two and they joined forces to buy the dilapidated hotel from Costes’ uncle. Located in the now trendy Pigalle district, it had functioned as a hotela favorite of sex workers in the area.

“I had just opened Le Baron nightclub, a place that played the music we wanted. The idea for the hotel was to have a place with the rooms, the beds and the food we wanted,” Saraiva says. When he first opened the space, it was almost an extension of his iconic nightclub, somewhere he could offer a bed to the crowds that frequented it.

However, its reputation for throwing the best parties in town has extended to the hotel as well. His favorite nights there are launch parties and dinners with best friend Olivier Zahm, co-owner of Purple magazine. According to Saraiva, “those are legendary.”

Soon the hotel with 24 rooms was almost always fully booked. This called for more space which was provided by the Hôtel Amour Nice and the Hôtel Grand Amour, which is also located in Paris.

“Hôtel Grand Amour is the younger sibling of Hôtel Amour, she is slightly bigger than the first. That’s why we call her grand, but she has kept the same DNA as her older sister. We have more space so that we can have a little more nightlife ; a bar and library called the Book Bar, for music and books and late night fun,” says Saraiva.

Part of the DNA that Hôtel Grand Amour preserved makes every bedroom different. Curated by the Swedish-French artist or his network of friends, each bedroom is treated as a different space for experimentation.

In the two hotels you will find: a bedroom with mirrored disco balls covering the ceiling by French designer Alexandre de Betak, a bedroom created by conceptual artist Claude Rutault, where you can hang monochrome paintings around the faded pink room to make it your own and the late writer and art critic Glenn O’Brien has a room with two Hermes Baby typewriters — one with a French keyboard and one American.

However, it is not said that any of these will be there by the time you check in as the space is constantly changing.

Speaking of the ever-changing rooms, he says “we did it in a very instinctive way, we had no idea or concept or style. It was very free and inspired by our mood. This became our style, and now with my partner Emmanuel Delavenne, we still retain that very free spirit of decorating and making things ourselves.”

As part of our fourth multimedia flagship Not In Paris, we have partnered with the hotel to develop a capsule collection that reflects its bright character. Available to shop through the Highsnobiety store, check out what the graphics collection looks like in the hotel through the main article above.