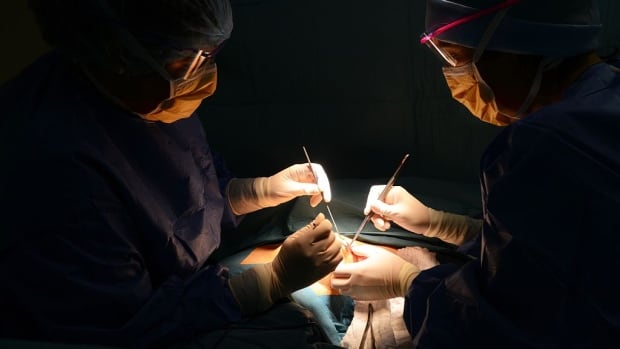 For more than three decades, Dr. Teresa Kieser assisted patients at Foothills Medical Center in Calgary as Alberta’s only female cardiovascular surgeon. She is recognized worldwide for her work and has published several medical and research papers.

But as her career draws to a close, Kieser wants Canadians to think about another part of her journey: the gender-based discrimination she claims she experienced during her 34 years in the position.

“I just thought, ‘I can’t just disappear into the sunset after going through all this without letting the daylight shine on it,'” she said. The current‘s Matt Galloway.

Last month, Kieser filed a complaint with the Alberta Human Rights Commission against her employer, Alberta Health Services (AHS). She claimed she faced a lack of respect and complaints about her work speed – all because of her gender.

“This has been going on for a long time, and… I just… [ignored] it and took the main road. Because as a woman in a male-dominated field you don’t want to rock the boat,” she said. “You’re so happy to be doing what you’re doing, and you’ve come this far.”

So this human rights complaint, Kieser said, is to “shed light on the conscious and unconscious bias towards women in the workplace.”

In an email to The currentAHS said it cannot comment on specific complaints due to privacy concerns, but said it is “committed to creating safe and secure workplaces for all doctors, staff, patients and families. Any form of harassment or violence will not be tolerated.”

“AHS recognizes the opportunity to better support our female physicians, female physician leaders and our entire physician staff. All instances of inappropriate behavior are considered thoroughly and confidentially, and we take appropriate steps to ensure that our people are safe and protected,” it said. the AHS. †

An incident she outlines in her 11-page complaint occurred in November 2020. A male colleague questioned her judgment, clinical decision-making and technical skills related to two patient cases.

An external investigation soon followed. As a result, Kieser was not allowed to perform surgery for more than a year during the study.

Kieser calls that ordeal “inhumane” and some of the darkest days of her life.

“Taking away someone’s ability to give is the worst thing you can do,” she said. “But the people who really suffered were the patients I couldn’t help and the student heart surgeons I couldn’t reach.”

Kieser’s case is not unique in medicine. Last year, Dr. Irene Cybulsky, the former chief of cardiac surgery at Hamilton Health Sciences, filed a gender discrimination case against the hospital network after the Ontario Human Rights Tribunal found that gender bias had played a role in her dismissal from that position.

According to a study by the Canadian Medical Association of female physicians and medical students at the 2020 Canadian Women in Medicine Conference, 77 percent of respondents said they had experienced gender inequality in their education or practice environment.

This is the only way change will be affected – if daylight is thrown on the inequalities women undergo to get to where they are.-Dr. Teresa Kieser

Kieser said she believes now is the right time to make her complaints public.

“It’s hard enough doing heart surgery — let alone having to watch your back and… [see if] someone is going to attack what you did,” she said.

“This is the only way change will be affected: if the light is thrown on the inequalities women face to get to where they are.”

According to the CMA, more than half of all freshmen medical students in Canada were female in 2017/18. Yet surgery is still a male-dominated field; Kieser remains Alberta’s only female cardiovascular surgeon 34 years after he entered the field.

Some of it comes down to the assumptions people make about surgeons, according to Dr. Nancy Baxter, a surgeon who heads Melbourne University’s School of Population and Global Health.

“When people think of a surgeon, they generally think of a man,” she said. “So they think of qualities that are more supposedly masculine.

“Surgeons are people who get things done, who are decisive, who can be abrasive,” she said, “as opposed to what people generally think of as feminine, which is team building, collegiality, collaboration. That sort of thing.”

dr. Marisa Louridas, a surgeon at St. Michael’s Hospital in Toronto, says she has experienced this firsthand.

“As a junior surgeon, when I think about it, I’m still not seen as a surgeon,” she said. “When I walk into a room, they assume I’m a nurse or some other part of the healthcare team — and that assumption is very, very strong.”

Because of these assumptions, there’s a tendency to question a female surgeon’s results, Baxter said, no matter how experienced or talented she is.

Misogyny is very common… and I think it just shows up, especially in surgery, a specialty where women still aren’t the norm.-Dr. Nancy Baxter

This mindset has its roots in medical school and occupational segregation, Baxter said.

“When [you’re] in medical school… you kind of rely on your tutors, your mentors to steer you into the specialty that’s probably best suited to you — in terms of your skills, your abilities, and your personality,” she said.

“Because women aren’t seen as surgeons, women are kind of sent into non-surgical specialties.”

Though she’s only been in the practice for a few years, Louridas said she’s seen the impact that occupational segregation has had on emerging female surgeons — but also the effect female surgeons, like herself, can have in countering those assumptions.

“I have medical students come to my operating room…then send me emails that say, ‘It’s so helpful to see a woman in the operating room who has a family and is still doing this job,'” ” she said.

“It just speaks to that: There’s a hidden curriculum … sending these medical students away before they set foot in the hospital.”

Encouraging more women to become surgeons is only part of the solution, Baxter said.

“Sexism is deeply pervasive in society,” she said. “misogyny is very common… and I think it just shows up, especially in surgery, a specialty where women still aren’t the norm.”

One of the ways it can get out is through rude comments about female surgeons.

plastic surgeon Dr. Darby Little, a resident of the University of Toronto, said: The current that once, while she was in an operating room with inmates and interns, the men started ranking the best looking female surgeons.

“In retrospect, I think what was so concerning about this experience is that as a freshman medical student, I wasn’t surprised, not offended,” she said. “I almost expected or anticipated this behavior.”

I think we need to change the culture of surgery so we have more male allies, and men just aren’t willing to get involved when something like this has happened.– dr. Nancy Baxter

Louridas said it hurts to hear stories like Little’s, but it’s not surprising either.

“Unfortunately, I’ve also been in operating rooms — and I think most people have — where the conversation isn’t appropriate, especially where they’re referencing one gender or the other,” she said.

Kieser said surgery is still an old-fashioned boys’ club and as a result there is a “terrible amount of unconscious bias” in the field.

According to Baxter, part of that struggle is encouraging men to speak up when they see or hear discrimination in the operating room.

In the operating room where Darby Little was, she said, there were probably some junior male students. “Many of them may not have wanted to participate in that,” she said.

“I think we need to change the culture of surgery so we have more male allies, and men just aren’t willing to get involved when something like this has happened.”

Otherwise, Baxter said, female surgeons will continue to experience what Kieser and Little went through.

“You can have all the women in the operating room you want. But until the bro culture changes, I don’t think anything will change,” she said.