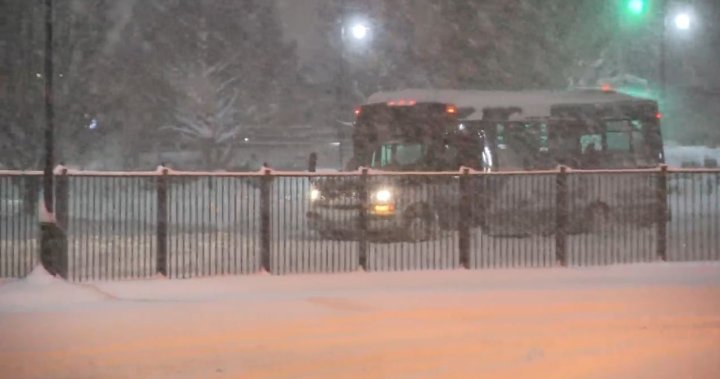 The effects were especially felt on the SkyTrain system, with the Expo Line most affected, the transit and transportation service said in an afternoon update.

From 5pm the Expo Line ran between Waterfront and Scott Road stations and all stations in Surrey had reopened.

However, expo line passengers will need to transfer at Scott Road station in either direction to continue their journey. Braid and Sapperton stations remained closed.

Earlier in the afternoon, the entire line was held in place as TransLink de-iced trains to clear the tracks.

The Millennium Line continued to experience significant delays, with no service currently between Lougheed and Burquitlam stations, TransLink said.

On the Canada Line, service moved between Waterfront Station and Vancouver International Airport.

However, Canada Line service was suspended between Bridgeport and Richmond-Brighouse stations.

TransLink is rerouting buses to fill the gaps in SkyTrain service.

Anyone using public transportation should check their route by signing up for Transit Alerts, checking the Journey Planner, or following them on Twitter @TransLink.

TransLink previously activated its ‘snow plan’ early Friday morning ahead of the forecast of snowfall and freezing rain.

The snow plan consists of many additional measures to ensure that “all public transport services are prepared for possible snowfall”.

TransLink says it must take even more measures if conditions worsen.

Those measures include tire socks, running SkyTrains all night to keep the tracks clear, and more staff on HandyDARTS and other buses and SkyTrain terminals.

“With a winter storm warning in effect, customers are being asked not to travel if possible. For those who need to travel, customers should expect delays and build in additional travel time,” TransLink officials said.

“Additional staff have been working overnights and will be working all day today to ensure the best possible transportation for customers.”

3:27
Fines for not clearing snow from cars and other snow driving etiquette

A winter storm warning is in effect for Metro Vancouver, issued by Environment Canada.

“Heavy snowfall followed by sleet and then heavy rain; Localized strong winds will give wind chill readings down to -15 (Friday) morning,” it said.

“Travel conditions will be challenging due to heavy snowfall, ice pellets, freezing rain and heavy rain on snow or ice.”

Another frontal system will bring heavy rain to Metro Vancouver on Saturday. Local flooding due to snow-clogged sewers and snowmelt is likely, Environment Canada said.