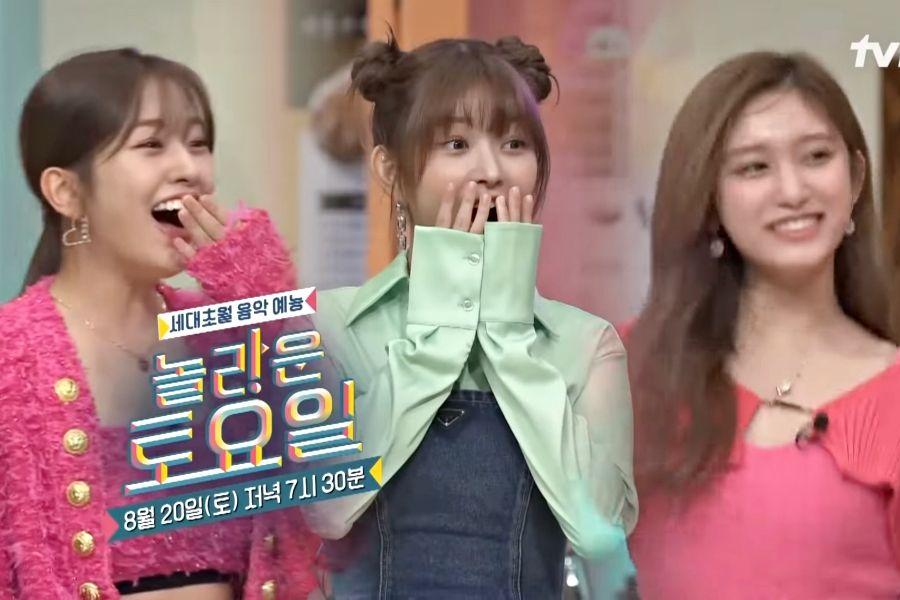 Get ready for IVE’s An Yu Jin, Rei and Leeseo to take over tvN’s “Amazing Saturday”!

On August 13, the popular variety show aired a preview of the upcoming episode, which will feature the three IVE members.

The newly released preview begins with An Yu Jin jokingly calling out host Boom for keeping her sharp during her previous guest appearance on the show. An Yu Jin impersonates the MC by saying, “Yu Jin, you should be worried about screen time,” which leads to the cast members teasingly and disapprovingly exclaiming, “The MC is the one who should be worried about screen time! Why would you say that to a guest?” An Yu Jin then proceeds to “expose” the host, who ends up embarrassingly asking, “Please stop.”

After An Yu Jin shows off her dancing skills by covering NCT U’s “BOSS,” Rei turns to another cast member of “Amazing Saturday,” revealing that Kim Dong Hyun told her not to worry. about the correct answers. While Kim Dong Hyun hangs his head in shame, everyone laughs as Rei says he advised her, “It’s okay, we can just eat and go home. You can just relax.”

Finally, IVE’s youngest member Leeseo surprises the cast with her young age, with Taeyeon noting that Leeseo was born the same year Girls’ Generation debuted (2007). Leeseo also mentions that she met Shin Dong Yup’s daughter in elementary school, which led the rest of the cast to tease him about his age.

The IVE members’ episode of “Amazing Saturday” will air on August 20 at 7:30 PM KST. In the meantime, check out the new preview below!