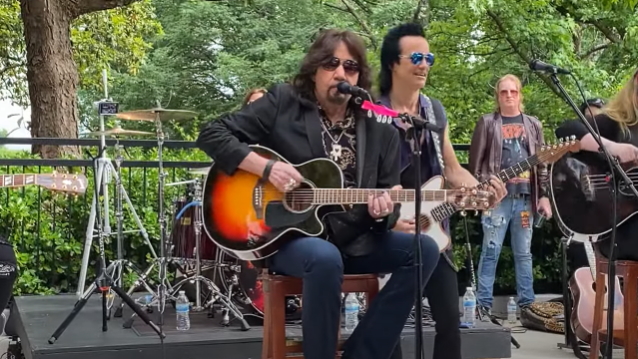 Original KISS guitarist Ace Frehley made a surprising, untrained appearance at this year’s poolside acoustic show Creatures Fest, taking place May 27-29 at the Sonesta Nashville Airport Hotel in Nashville. Video from Frehley performing a rendition of THE ROLLING STONES† “2000 men”which KISS recorded for the album “Dynasty”can be seen below (thanks to The Rock Experience With Mike Brunn. Participate Ace were before the performance TRIXTER‘s Steve Brown and SISTERS POP‘s Brennan Mileto†

According to Creatures Fest promoter Neil Davis† Criss will join Frehley onstage during the guitarist’s May 27 set to play a few songs.

Vincent is scheduled to perform on night two of Creatures Festwhile Kulick close the event on Sunday, May 29. The festival also features performances by SILENT REL† ENUFF Z’NUFF† VIXEN† John Corabi† RETURN OF THE COMET and BEAUTIFUL BOY FLOYDamong other things.

Frehleyone of the founders of KISS, recently said he’s up for a reunion of the original band, but only if the price is right. During a performance on SiriusXM‘s “Trunk Nation with Eddie Trunk”† Frehley said of the chances of him playing with his former bandmates: “Anything is possible – I’ve always said that. That’s the first question so many people have asked me over the years: ‘Would you ever consider playing a KISS meeting?’ I said, ‘I’ve never closed the door on anything.’ If the money is right and it’s presented to me in the right way, anything can happen.

“I’m on good terms with Paul [Stanley, guitar/vocals] and Gene [Simmons, bass/vocals], which is nice, because we created something really special in the early ’70s that has outlived so many other bands. And God bless them. They still do it; I still do. Peter is still nearby. I don’t know exactly why Peter hadn’t toured as much as I have over the years, but it is what it is.”

Frehleythe last release was “Origin Vol. 2”the sequel to his 2016 collection of cover songs that inspired the first KISS guitarist.