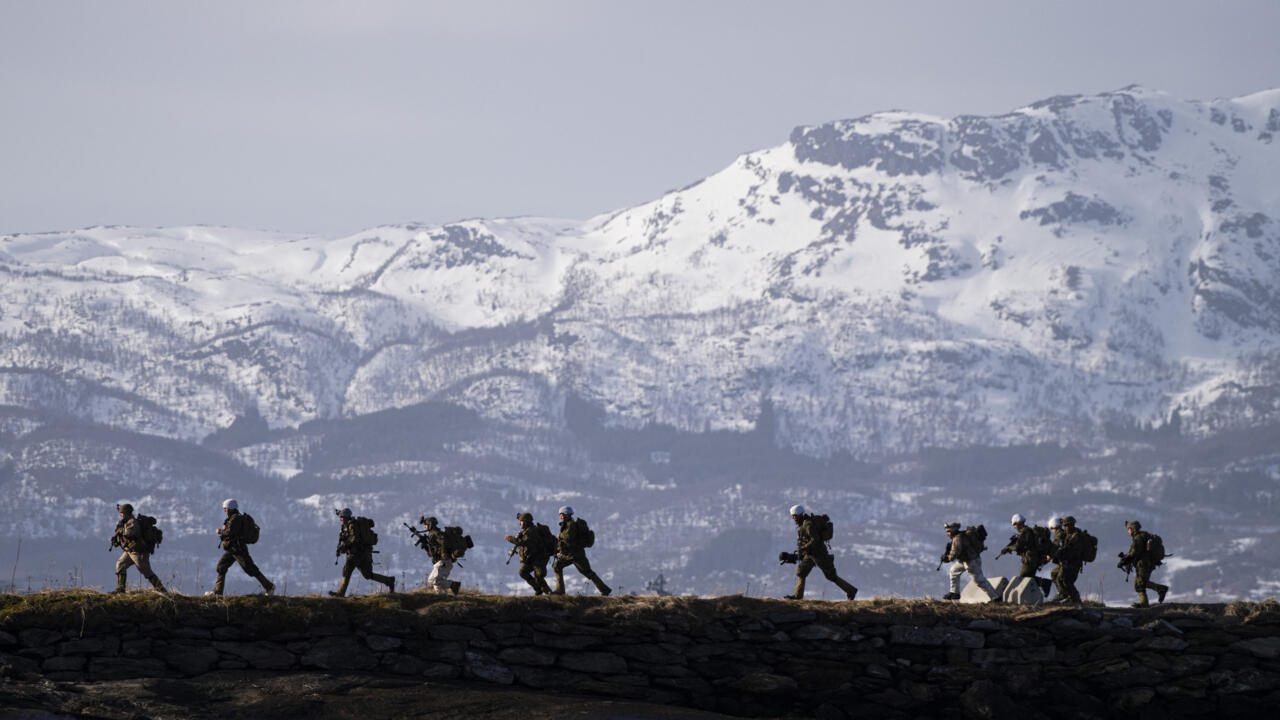 Russia shares a maritime border in the Arctic with European and American members of NATO. While environmental and economic concerns have typically dominated cooperation in the region, the war in Ukraine threatens to upset this careful balance.

Russia’s senior diplomat at the Arctic Council’s intergovernmental forum, Nikolai Korchunov, spoke on April 17 about NATO’s increased presence in the Arctic since the war started in Ukraine. He said long-planned military exercises between NATO, Finland and Sweden in the region in March were “a cause for concern” for Russia.

“The Alliance recently held another large-scale military exercise in northern Norway. In our view, this does not contribute to the security of the region,” he said.

If the Western military alliance continues its activities in the Arctic, “unintended incidents” could occur, he said, without specifying what these could be.

In such a unique part of the world, ‘incidents’ of any kind can upset a fragile balance.

The Arctic is a potential gold mine for energy resources and shipping routes, often governed by complex bilateral agreements between Arctic states. The eight Arctic countries – Canada, Finland, Denmark, the United States, Iceland, Norway, Sweden and Russia – usually work together. United by their shared Arctic coastline, harsh environmental conditions have led them to negotiate agreements on maritime law, environmental balance and security needs that are as fundamental as conducting effective search and rescue operations.

“Arctic ties have not been broken quickly, easily or lightly, and they shouldn’t be,” said Dr Melanie Garson, a lecturer in international conflict resolution and security in the political science department at University College London, in an interview with FRANCE 24. “There are critical issues in the Arctic that must be kept stable for short- and long-term stability.”

But there are signs that the Russian invasion of Ukraine is already disrupting this careful balance. Russia now shares the Arctic coastline with five NATO member states, plus Finland and Sweden — all of whom are sending military and financial support to help Ukraine fight the Russian invasion.

All members of the Arctic Council except Russia announced in March that they would boycott talks in Russia, which currently chairs the Atlantic Council until 2023, over the “blatant violation” of Ukraine’s sovereignty. The work of the group has therefore been put on hold.

“It’s very unusual,” Garson says. “The Arctic Council has survived periods of tension, but what we are seeing in Ukraine is a huge turning point in history. We can’t deny how that can affect proven alliances.”

‘A fifth ocean on top of the world’

Political and economic interests in the Arctic are determined by its unique and rapidly changing climate. While the southern Arctic is covered in forests, further north the land becomes treeless, dominated by tundra, deserts and ice that is melting rapidly due to climate change.

In the past 30 years, the thickest ice in the Arctic has declined by 95 percent. If greenhouse gas emissions continue to increase at the current rate, the Arctic could be ice-free by summer 2040.

The increased human presence poses an additional threat to a natural landscape that is already under pressure.

The urgent climate situation has traditionally been an important reason for international cooperation. The first step towards the formation of the Arctic Council was the Arctic Environmental Protection Strategy signed in 1991 as an agreement between Arctic states and indigenous peoples’ organizations.

But the dramatic loss of ice is changing the political and economic landscape in the region. “We actually have a fifth ocean opening on top of the world,” said Katarzyna Zysk, a professor at the Norwegian Institute of Defense Studies. “And when that ocean is open, it will be used for economic and military purposes.”

In Russia, the loss of ice is also changing military focus. Of the total coastline of the Arctic Ocean, 53 percent is Russian. “It’s a huge, expansive area,” Zysk says. “Those borders were protected by ice, but now the ice is disappearing. That means the region could potentially be used in an attack on Russia.”

Consequently, Russia has expanded its military presence in the far north. The most obvious example of this is the Arctic Navy, the Northern Fleet, founded in 2014 and based on the Kola Peninsula near the borders with Finland and Norway.

Its arsenal includes submarines armed with nuclear-powered missiles, anti-submarine aircraft, aircraft carriers and ships armed with missiles. “The Northern Fleet is the strongest part of the Russian Navy,” Zysk said. “Russia has the largest share of strategic submarines and other key non-nuclear capabilities in the Kola Peninsula.”

‘Ukraine was a game changer’

The creation of the Northern Fleet coincided with Russia’s annexation of the Crimean peninsula from Ukraine. For international observers, Russia’s military activities in the Arctic took an increasingly aggressive stance, increasing the commitment to other Arctic states.

“The main thrust of NATO’s interests in the Arctic came after the annexation of Crimea,” Zysk says. “Ukraine was a game changer because while Russia had generally been cooperative and predictable in the Arctic, NATO could not decouple what Russia was doing in Ukraine from its military expansion in the Arctic.”

This also meant expanding NATO’s presence in the Arctic to ensure that if Article Five were activated by a Russian attack in the region, the group could provide the collective defense required. However, Russia also continued to expand its troops. As of 2016, it increased the frequency of its military exercises in the Arctic, even demonstrating an “ability to project power beyond its Arctic waters and assert maritime control,” according to the nonprofit policy research organization, The Center for Strategic and International Studies.

The current war in Ukraine has again raised the stakes. If Sweden and Finland join NATO – which both are seriously considering doing – all Arctic states except Russia will be part of the military alliance.

“NATO will then have a strategic re-evaluation of how the Arctic sits within the alliance, and the decisions NATO will make will shape the future relationship,” Garson said. “Given the rumblings from Russia about this possible NATO expansion, it could cause tensions.”

Most recently, this rumble includes an April 14 threat that if Sweden and Finland join NATO, Russia would deploy nuclear weapons and hypersonic missiles to the Baltic region.

“There are some scenarios you can imagine where Russia would challenge Article Five,” Zysk says. “One possibility is that Russia could do it in the Arctic because it has a relatively strong military presence there compared to the other NATO states.”

‘The protagonist in the Arctic’

However, Russia isn’t necessarily building up its military might in the Arctic for an attack — it has plenty to protect there, too.

A 2008 US Geological Survey study found that the Arctic could be home to the largest untapped oil and gas reserves on Earth, with billions of barrels of unmined energy resources. Much of the reserves are thought to be offshore, in Russian seas.

Oil and gas are not the only potential assets. “The region is not only very rich in energy, but also in mineral resources, many of which are in the Russian Arctic,” Zysk says. “There are also very well-preserved fish stocks that are valuable given the growing food crisis in the world.”

In addition, there is potential for a lucrative economic future as a transport hub. The Northern Sea Route that runs along Russia’s northern coast is currently blocked by ice for most of the year, but if not, it could become a very profitable shipping channel. For example, shipping times and fuel costs for transporting goods between China and Europe would be drastically reduced if they could travel via the Arctic instead of the current route via South Asia and the Suez Canal.

These possible future scenarios have increased international interest in the Arctic. In addition to the eight core members with territories in the Arctic, the Arctic Council also has 13 council observers who can suggest projects in the region. These include France, Germany, the UK and especially China, which has actively set up Arctic research stations and invested in mining and energy.

This international interest in the Arctic’s resources has also forced Russia to play a more dominant role in the region. “It has stimulated Russia to strengthen its position, because Russia sees itself as the leading player in the Arctic – and for good reason, if you look at the geography,” Zysk says.

So far, however, there seems to be little incentive from Russia to extend this role to military clashes in the far north, despite the clash in Ukraine that pits Arctic states against each other.

“My reading is that Russia has actually tried to prevent escalation,” Zysk says. Following NATO exercises with Finland and Sweden in early March, NATO troops took part in another exercise in Norway on 25 March. Russia’s response was muted — it issued a protest statement and conducted its own military training exercises on the same day.

“Russia always protests when NATO conducts military exercises close to its borders,” Zysk said. “But we have not seen any provocative behavior from Russia in the Arctic. I think Russia is actually trying to prevent it from escalating [international reaction to] the conflict in Ukraine, and his army is already fully involved there.”

Among Western allies, too, the war in Ukraine may prove a turning point for political relations in the Arctic, but not necessarily a rift. “The Arctic Council has temporarily paused its work, but it’s not falling apart,” Garson said. “More than anything else, trust in relations with Russia has been seriously violated, so the Arctic states are rethinking how they want to proceed.”

In a part of the world dominated by such a challenging natural landscape, the need for cooperation and cooperation between Arctic states may eventually lift political tensions. “The Arctic is ruled by a pretty complex web of bilateral and multilateral agreements, and I think the nations will be careful not to run away from it too quickly,” Garson said. “There will be a will for political cooperation.”