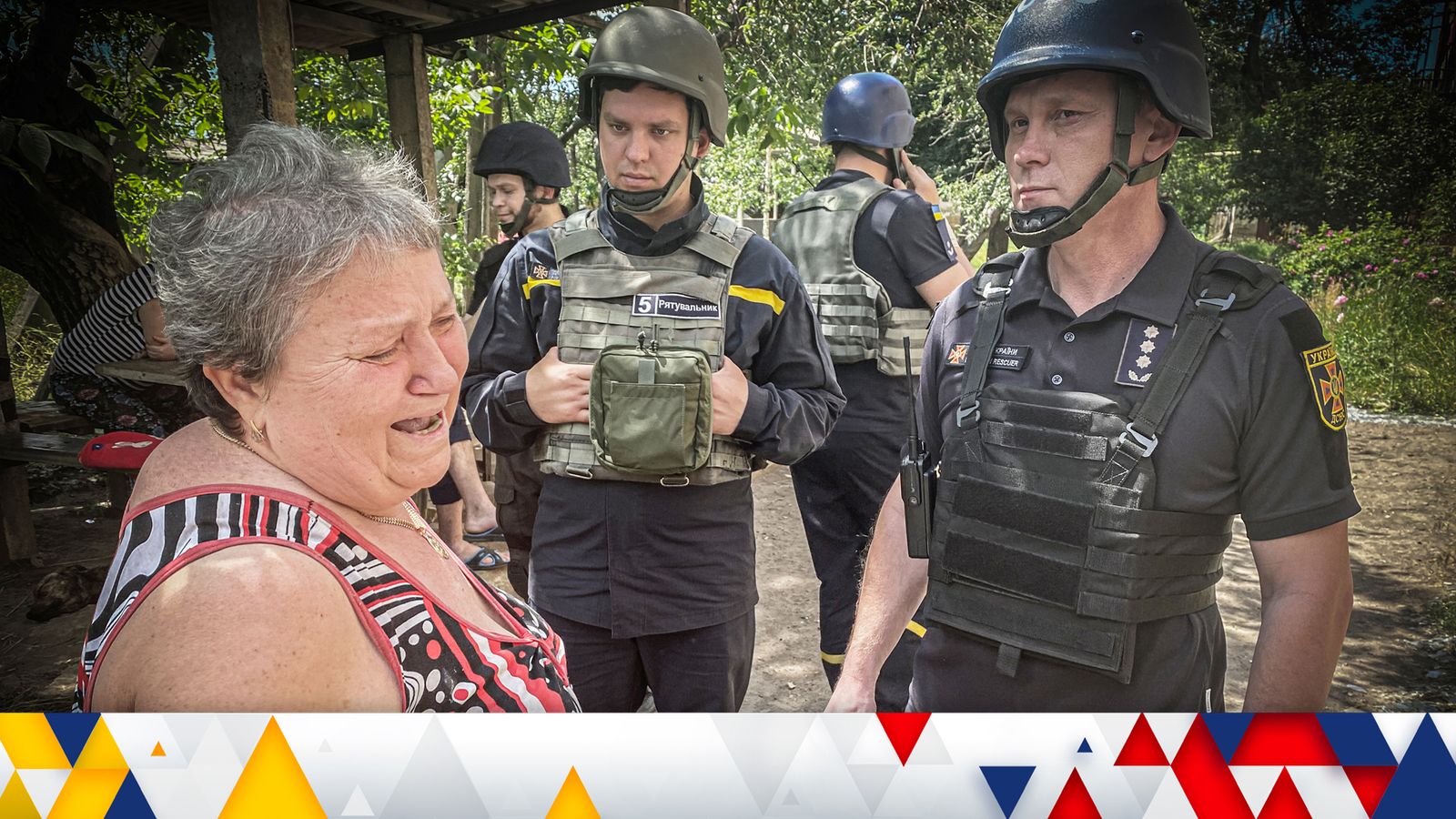 The ever sickening sound of incoming and outgoing artillery, mortars and rockets accentuates the otherwise quiet streets of the frontline Ukrainian city of Bakhmut.

We climb into a huge armored car, painted white by the local emergency services.

They call it the “capsule” and they have recently started using it to direct their evacuation efforts in the towns and villages just a few miles from Russian frontline positions.

The fierce fighting in the cities of Severodonetsk and Lysychansk is on the cutting edge.

If they fall and the Russians take the highway south, known here as the ‘road of life’, there will be no way out for those left behind.

The ‘capsule’ goes into the countryside. This crew of the Bakhmut District State Emergency Services has been called to remove people from the frontline city of Soledar.

We pass heavily armed Ukrainian defensive positions, their tanks and artillery hidden in trees – the countryside a network of freshly dug trenches.

The rescue team tells us they can never know for sure how many people are on the evacuation truck.

These men have saved thousands since the beginning of the war.

“We were told today about three, maybe six, but sometimes nobody comes out or they change their mind,” Major Artur Spitsin, who leads the mission, told me.

“There was shooting this morning, so it could stop people from leaving.”

It seems counterintuitive to us that, as it gets more dangerous and the incoming fire intensifies, people are less willing to leave their homes.

But that is often the case in wars around the world. They stay despite the danger and complete lack of water, electricity or anywhere to get food.

‘I don’t want to impose myself’

Our first stop is at a large apartment building, where Major Spitsin and his team begin banging on doors, trying to find those who have asked to leave.

But 76-year-old Natalia Babenko tells them she’s the only person left, just her and her dog — and she doesn’t want to go.

These towns and villages look deserted, but there are still plenty of people here.

Sometimes, as the fighting in the neighborhood intensifies, they just don’t show up to evacuate. They are too scared.

The crew wants to look for others, but they see a military position not far away and tell us that we are in danger and must leave immediately.

They gather to quickly discuss the next destination.

“It’s the only way, we have no other option,” Major Artur Spitsin told his team.

“Well, damn it, it should be all right now, we should go there.”

We make our way to the next stop in Soledar, along the Ukrainian front lines.

We reach a group of people who are cooking outside. There is no more water or electricity.

The first responders approach two women and say it is time to evacuate.

“If God wants me to live or save me, I will be saved,” says one of the women.

The women then start arguing about whether one of them should go before agreeing that they shouldn’t.

“If it gets worse and the situation gets more critical, and you want to leave, we may not be able to come here,” the crew tries to reason with them.

They wave them off: “Thank you so much, guys!”

‘Everything we’ve worked for is here’

They choose to remain underground in the darkness of a cellar. 23 live there.

They collect water in buckets and an old, small radio, sitting on a makeshift table, is their only contact with the outside world.

“We don’t want to go because when we leave… well, at least here we have our own houses, apartments, everything we’ve worked for in our lives is here. If we leave, we won’t return, and eventually we will destitute,” 70-year-old Nadezhda tells me as her 95-year-old mother watches.

The residents have no use for it, they are not going away.

As we prepare to leave, Nadezhda emerges from her underground home.

She is in tears, emotional and almost hysterical.

‘Your mothers are the same as me’

In tears she hugs us all and we leave.

“Guys, my condolences to your mothers. Your mothers are the same as me…”

This small group, choosing to stay, returns to their fires and cooking pots bubbling away quietly.

They should never leave this place.

They watch as their only guaranteed way out, the ‘capsule’, disappears into the dust.