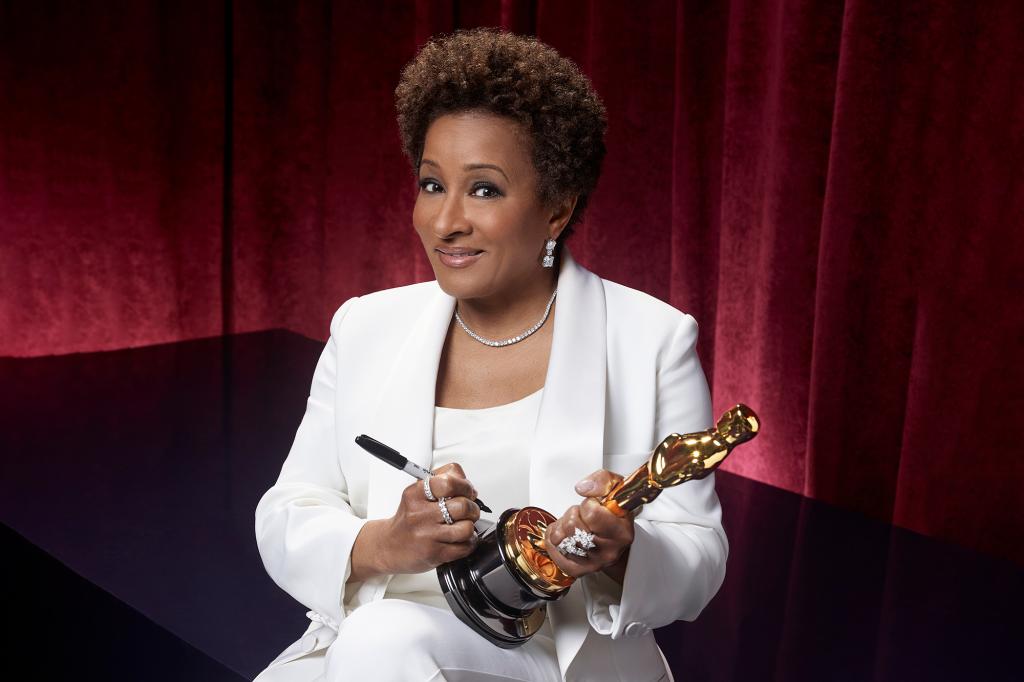 “Good luck at Oscars. Please give our regards to Wanda!” read a text from my dad and stepmom as I boarded a plane to LA on Thursday to cover this year’s parties for the Academy Awards. It turned out my civilian parents were Wanda Sykes superfans, more enthusiastic about her co-hosting the show than any movie star.

Who knew? And who knew Sykes’ successful night would be eclipsed by Will Smith’s palm.

When you’re covering Oscars parties, naive friends and family will tell you to “look out” for certain stars for them, not realizing the weekend isn’t about celebrity sightings and selfies, but a grueling yet glamorous slog of sleepless nights, slippery scoops, PR provocations, hors d’oeuvres and anxiety. You become completely un-star struck. Even when you’re at the Sunset Tower sitting at a table between Dua Lipa and Robert Pattinson, with Orlando Bloom, Riz Ahmed and the cast of “Euphoria” partying around you, you’re panicking you might be in the wrong place at the wrong time.

Then again, it ain’t exactly reporting on Ukraine — the pressure to cover the events usually comes with a waiter offering sliders at the end of the night.

At a string of Oscars pre-parties last week, I was yelled at by WME superagent Ari Emanuel — who accused me of trying to be “provocative,” and said he didn’t “suffer fools gladly,” when I innocently asked him why his agency wasn’t throwing its annual bash — and I had an amped up chat with Quentin Tarantino in which the director pooh-poohed the Oscars altogether and said he couldn’t wait to see Tom Cruise’s “Top Gun” sequel.

By Sunday night I was at an Oscars screening party put on by Neon, the studio behind the Kristen Stewart film “Spencer” as well as other titles in contention. As we all watched the ceremony, I was panicked: In a few hours I’d be at the Vanity Fair Oscars Party — truly the world’s only FOMO-free zone since everyone who’s anyone is there and you are finally, definitely in the right place . But the awards had, by this point, been such a snooze. I had no idea what I’d actually ask any of the partying celebs. I mean, how many times can we learn that Jessica Chastain attended Julliard?

And then came the slap that was heard around the world.

Suddenly everyone at the Neon party was struck silent, before erupting in debate. But whether one thought Will Smith should be stripped of his Oscar or celebrated for defending his wife, my mission was suddenly clear. There was only one topic to be discussed for the rest of the night.

Later at the Vanity Fair party, there were stars and VIPs from Kim Kardashian to Apple boss Tim Cook and everyone in between — including Smith himself, with wife Jada, dancing and celebrating his Oscar win like nothing out of the ordinary had happened.

Some celebs declined to discuss the slap (Bill Maher was “still processing”). Others freely spoke about the incident (Tiffany Haddish backed Smith, while Diddy cast himself as peace broker), or even joked about it (Damon Wayans announced while taking a star-studded group photo, “If you want to get slapped, you’ve got to get in!”).

As the party raged on, I scanned the starry room. There was Wanda Sykes at the bar, ordering a drink.

When I approached and asked her what she thought of the incident, she vaguely shook her head and mumbled something. (A couple days later, Sykes would appear on the Ellen DeGeneres Show and reveal her true feelings: “It was sickening. I physically felt ill, and I’m still a little traumatized by it.”) But on this night, she just looked like she’d had a hard day at the office and didn’t want to talk about it. Her mouth sort of screwed up to the side, and she looked a bit pained by the bizarre Oscars incident. She needed a drink. I dropped it.

But before we parted ways, I told her, “I’m sorry if what happened detracted from your experience tonight, because you were great. You did such a great job, you were really funny, and I’m sorry if your performance was overshadowed.”

She said, “Thank you,” and I added, “By the way… I just have to tell you that my dad and my stepmom on the Upper West Side are obsessed with you. They’re huge fans. In fact, when I was coming here from New York, they were way more excited that I might see you than any other celebrity.”

When I turned to walk away, Wanda stopped me.

“Do you want to take a picture for them?” she said. I stopped.

For the record: I would never, ever take a selfie with a star. I’m old enough for it to strike me as weird, cheesy, amateurish and a dereliction of duty.

But Sykes smiled — and since she suggested it, I got out my camera.

When I boarded the plane back to New York on Monday night, I texted my father and stepmother the pic of myself and Sykes.

“Wow I feel like such a celebrity!!! Thanx so much!!!!!” my stepmother wrote back.

The night that Smith smacked a comedian at a show that gave him a career-boosting award, Sykes proved that some stars can still be class acts.

Ian Mohr, the executive editor of Page Six, has covered the Hollywood awards season for Page Six for over a decade — and never once taken a selfie until now.