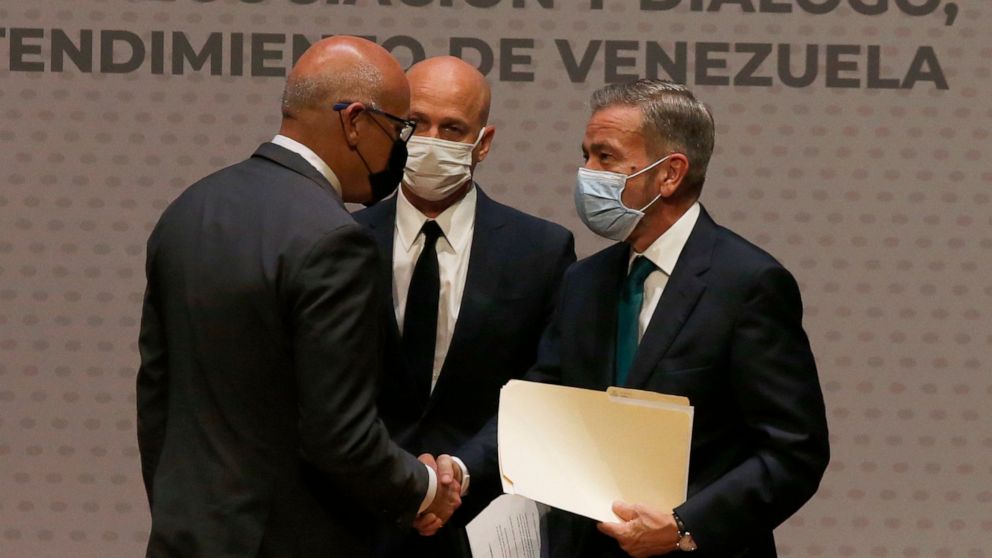 MEXICO CITY — Venezuela’s government and its opposition announced the resumption on Thursday over the weekend of long-stalled negotiations designed to find a common way out of their country’s complex crisis.

The announcement of upcoming talks in Mexico City comes two weeks after delegates from both sides participated in a roundtable discussion promoted by French President Emmanuel Macron. Norwegian diplomats will again supervise the negotiations.

“We announce that the Government of the Bolivarian Republic of Venezuela and the Unitary Platform of Venezuela have decided to resume dialogue and the negotiation process in Mexico on November 26, facilitated by Norway,” the Norwegian Embassy in Mexico tweeted. “There, the parties sign a partial agreement on social affairs.”

The dialogue formally began in Mexico in September 2021, but was suspended the following month when President Nicolás Maduro ordered his delegation to withdraw in protest at the extradition to the United States of a close ally.

Talks scheduled for this weekend are expected to focus on a humanitarian aid program for the impoverished South American country and the terms of presidential elections scheduled for 2024. Maduro and opposition representatives, including the US-backed faction and led by Juan Guaidó, is also likely to discuss a US extension for oil giant Chevron to operate in Venezuela.

A UN report released earlier this year estimated the humanitarian needs at $795 million to help about 5.2 million people through health, education, water and sanitation, food and other projects.

Maduro’s chief negotiator, National Assembly President Jorge Rodriguez, said in a statement that the government will sign an agreement in Mexico that creates a mechanism to “address vital social needs and public service issues, based on the restoration of legitimate resources, owned by the Venezuelan state”. , which today are blocked in the international financial system.” He highlighted a range of social needs, including vaccines, medicines, healthcare equipment and energy infrastructure.

However, Rodriguez’s statement gave no details about the financial resources he was referring to. Under President Donald Trump, the US stepped up economic sanctions against Venezuela and granted Guaidó the authority to take over the Maduro government’s bank accounts at the Federal Reserve Bank of New York or other US-insured banks.

Guaidó declared himself interim president of Venezuela in January 2019, arguing that the constitution, in his capacity as then president of the country’s National Assembly, allowed him to form a transitional government after Maduro was re-elected in a sham vote at the end of 2018. countries, including the US, Canada and Colombia, supported Guaidó’s move and began to recognize him as Venezuela’s legitimate leader.

“We Venezuelans have suffered the consequences of the lack of human rights guarantees and institutional mechanisms that provide solutions to our needs,” the opposition said in a statement. “For this reason, this delegation resorts to the process of dialogue and negotiation with urgency and the desire to find once and for all tangible and real agreements that translate into solutions to the humanitarian crisis, respect for human rights, respect for the rule of law and, above all, the construction of conditions and institutions that – among other things – guarantee free and observable elections.

About 7 million people have left Venezuela amid a complex political and humanitarian crisis. Three-quarters of those who remain in the country live on less than $1.90 a day, an international benchmark for extreme poverty. Many do not have access to clean, running water and electricity.

Maduro’s deputies walked out of negotiations in October 2021 after businessman Alex Saab was extradited on charges of money laundering from Cape Verde to American Maduro on the condition that Saab be resumed. He remains in custody, but his wife, Camila Fabri de Saab, will be part of Maduro’s delegation.