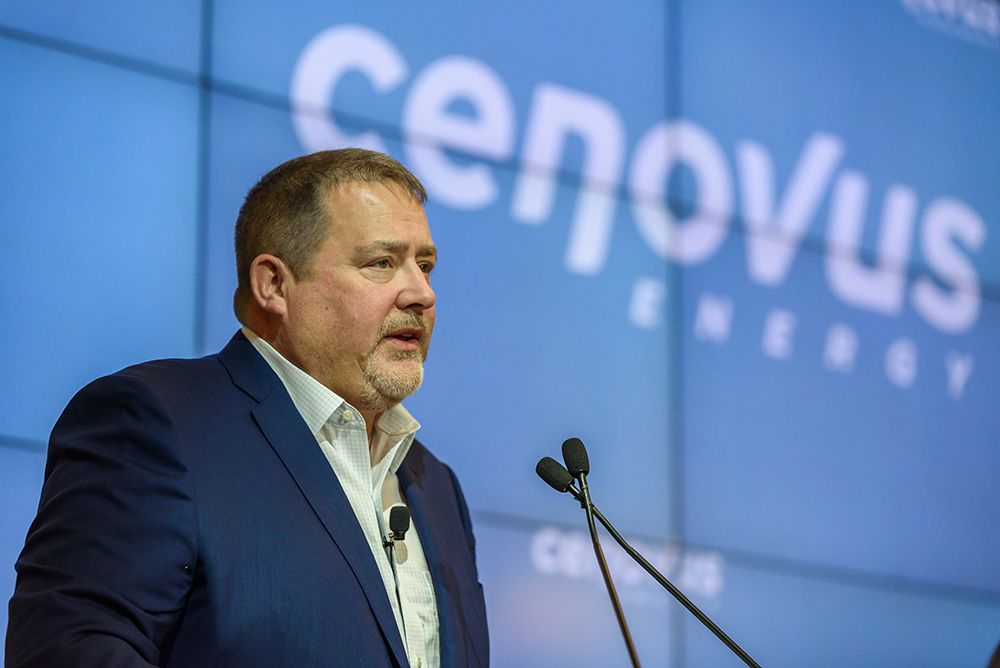 As oilands operators develop a blueprint to achieve net-zero emissions by 2050, they are not just turning to carbon capture, use and storage (CCUS) technology to achieve their climate goals.

They are also looking at smaller nuclear power plants in the oil sands.

Speaking on opening day of the Global Energy Show, Cenovus Energy CEO Alex Pourbaix said on Tuesday that the potential of small modular reactors is being explored by the Oilsands Pathways to Net Zero Alliance as a way to reduce emissions generated in bitumen production.

“Small modular reactors – I think in many ways that’s almost one of the holy grails of decarbonising the upstream oil and gas industry,” Pourbaix said at the event at the BMO Center.

“We have the third largest oil reserves in the world. They are incredibly concentrated. They lend themselves very well to a centralized facility to produce steam.

“If we can commercialize small modular reactors, you could see a scenario where you can completely decarbonize the upstream flow in Alberta.”

The return of the annual Global Energy Show (formerly the Global Petroleum Show) comes after a two-year hiatus as oil and gas prices have skyrocketed and the industry is making strong gains, but also faces daunting questions about future decarbonization plans.

The Pathways Alliance represents six of the largest oil sands producers in the country, including Cenovus, Suncor Energy and Canadian Natural Resources.

The group aims to meet the federal government’s target of achieving net-zero emissions by 2050, which would enable the industry to produce one of the most cost-competitive and carbon-competitive barrels in the world.

The alliance is initially working on a $14 billion project that would develop a carbon trunkline in the province, connecting oil sands facilities to a CO2 storage hub in the Cold Lake region.

However, it also looks at longer-term developments to achieve its goal. A technology working group within Pathways is studying the possibility of introducing small modular reactors (also known as SMRs) into the oil sands.

Thermal oils and projects that use natural gas to create the steam needed to produce bitumen — as well as generate emissions — may be able to switch to nuclear power instead.

The small-scale reactors can generate between two and 300 megawatts, compared to a larger – and more expensive – conventional nuclear reactor that can generate 1,000 megawatts.

“The challenge with large reactors, such as a CANDU reactor, is historically that they are so large. They are just too big for any regional purpose in the oil sands,” Pourbaix told reporters after the event.

“The SMRs, if they could be commercialized and licensed, they would actually be much smaller. † † (and) produce steam without any CO2 emissions.”

The Alberta government formally agreed last year to partner with Saskatchewan, New Brunswick and Ontario on the emerging technology.

Earlier this year, the four counties unveiled plans to build a 300-megawatt SMR facility later this decade in Darlington, Ont.

“It has to happen. If they go to net zero. † † and to bring other parts of the industry down to zero, we’re going to need everything,” That said Energy Secretary Sonya Savage on the sidelines of the three-day conference.

Setting up a regulatory process and choosing an appropriate SMR design suitable for the oil sands takes time.

She noted that individual oilands operators have previously looked at the potential of nuclear power to generate steam for their operations. The Canadian Oil Sands Innovation Alliance (COSIA) has also studied the technology.

More in-depth work will be needed in the coming years, likely pushing any timeframe for nuclear power in the oil sands well into the 2030s.

“The cost is significant and it has never been tried in the kind of facilities we have,” DelFrari said in an interview.

“Small modular reactors are still in their infancy. † † so that’s where government policy – ​​and government participation as partners – can really help.”

Industry experts agree that small-scale reactors have potential for the oil sands.

The industry cut its emissions per barrel by 20 percent between 2009 and 2020, and SMRs could represent an even bigger change, said Richard Masson, former CEO of the Alberta Petroleum Marketing Commission.

“The companies have to make the evaluation . † † What risk are they willing to take on a technology that has not yet proven itself on a smaller scale?” said Masson, an executive fellow at the University of Calgary’s School of Public Policy.

Significant steps to zero in the Canadian oil and gas sector will require new technologies. And it will also take billions of dollars of private and public investment to get there.

“It is increasingly recognized that this is the next investment boom for the oil and gas sector here in Alberta and really around the world,” BMO Capital Markets analyst Randy Ollenberger told a panel on financing the energy transition.

“Just in Alberta between now and 2030, we’re likely looking at an investment range of over $15 billion. And by 2050, that number will likely approach $75 to $100 billion. So these are very important investment opportunities.”

Chris Varcoe is a columnist for Calgary Herald.