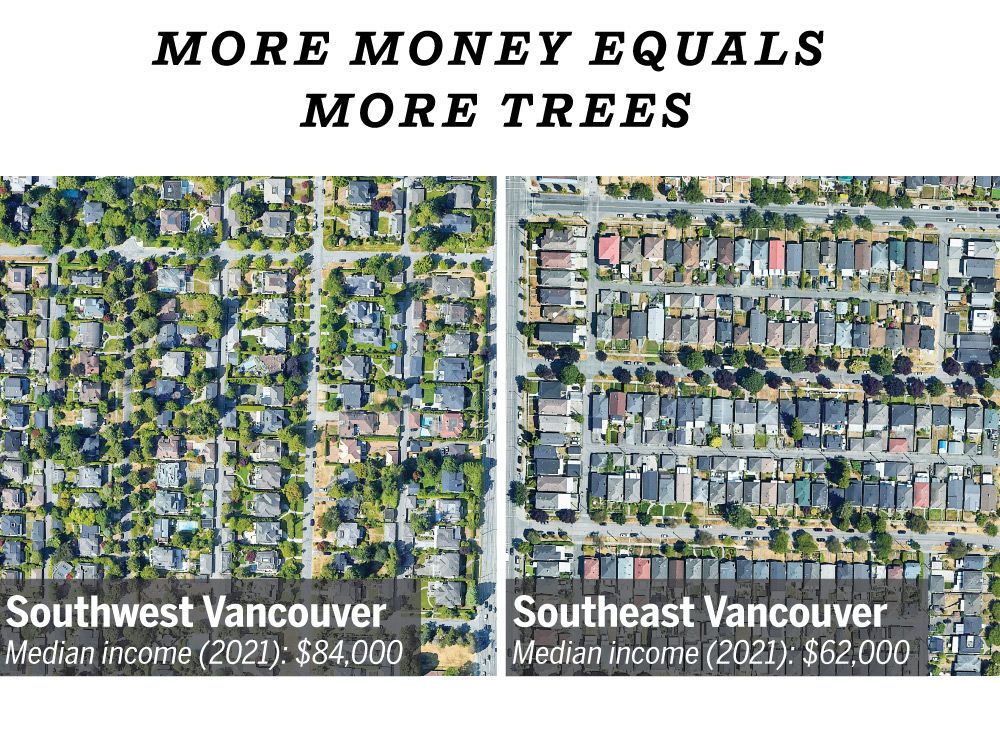 Vancouver ranks among the least equitable of Canada’s major cities when it comes to access to green space, according to a recent study from the University of BC

The study, which measured urban vegetation in 31 Canadian cities, compared access to urban green space with a number of social, economic and demographic variables, including age, education, income and race/ethnicity. It was found that in eight of the 31 cities studied, urban vegetation increased along with income. The relationship between income and greenery was strongest in Vancouver.

“Only a third of the cities we looked at had correlations between income and greenery,” said Lorien Nesbitt, an assistant professor in UBC’s forestry faculty and author of the study. “The relationship was greater in Vancouver than in other cities.”

Surrey and Coquitlam were also found to have better access to green space as incomes increased, although the connection was weaker. There was no relationship between income and vegetation in Burnaby, Richmond or Victoria, the other cities in BC included in the study.

Outside BC, similar but weaker relationships were found in Saskatoon, Winnipeg, and Montreal. In Toronto, the relationship was reversed and lower incomes were associated with better access to green space.

The study defined green space with parks, street trees, lawns, gardens and planting along the road.

“Greening needs to be done on the block or really at the local neighborhood level,” she said. “The more we can involve people at the hyperlocal level in greening, the better off we are from an equality perspective.”

To reduce inequality, Nesbitt said, Vancouver needs a program aimed at supporting communities with limited green space. This can be outreach and education, but also financial and physical support for trees on private property.

“If the city really wanted to educate people about this, they would participate in local activities that help people learn how to manage their trees,” she said, noting that many cities are proactively reaching out and supporting communities with urban greening programs. If people know how to handle and manage urban trees, then they will.

“You won’t solve any equality problem unless you take a focused approach that prioritizes equality,” she said.

The city used to have an annual tree sales program that helped Vancouver reach its goal of planting 150,000 trees in the city by 2020. Nearly 15 percent of this was on private property. That program was canceled in 2021, but Eva Cook of the City of Vancouver communications team said the city is “planning a new initiative to encourage residents to plant trees on private property,” which will cover targeted areas of the city. Details of the plan are not currently available.

Nesbitt said many people avoid planting trees on their property because they can’t afford it or don’t know how to maintain it.

“Involving people in planting trees on their private property is probably the most important thing we need,” Nesbitt said. “There’s only so much room for street trees and there’s actually a lot of room for private trees.”

She noted that as summers get hotter and drier due to climate change, it becomes increasingly important to involve community members in the maintenance of trees and public green spaces.

“With the tensions that climate change is piling up on the urban forest, we want to ensure that local communities manage those trees,” Nesbitt said. “We get more and more droughts in the summer. It is simply not possible for (the city) to water all the trees. We also need vigilantes to do that work.”

The city has a stewardship program called “Tree Vancouver,” which encourages community members to get involved in caring for the city’s urban forest. Contact [email protected] for more information.