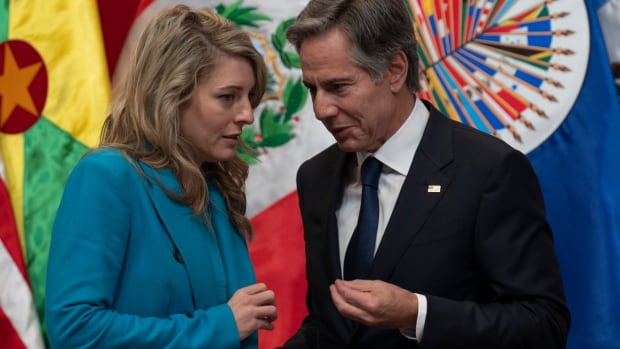 US Secretary of State Antony Blinken will visit Canada later this week — a journey that comes as the West grapples with a series of major geopolitical issues, such as the ongoing war in Ukraine and the deteriorating situation in Haiti.

As with that September meeting, the country’s top diplomats are expected to discuss the situation in Iran — where activists are demanding an end to the oppressive regime — the West’s stance in the Indo-Pacific region after Chinese President Xi Jinping had recently consolidated power and how to deal with an increasingly erratic Russian President Vladimir Putin.

“Canada and the United States share one of the most productive, collaborative and important relationships in the world on bilateral and global issues,” Joly said in a statement.

“Secretary Blinken’s visit gives Canada another opportunity to emphasize the importance of close cooperation between Canada and the United States on the world stage, including in the Indo-Pacific,” she said.

Itineraries with conversations about Haiti, Ukraine

Blinken is in Ottawa on Thursday to meet with Joly and Prime Minister Justin Trudeau and Deputy Prime Minister Chrystia Freeland. He will also visit a community center that supports Ukrainian refugees fleeing violence in their home countries.

On Friday, Blinken travels with Joly to Montreal and visits, among other things, a lithium recycling facility. Lithium is one of the main components in electric vehicle batteries. Canada has emerged as a major supplier of these and other essential minerals at a time when automakers are ramping up production of electric cars and trucks.

Both Canadian and US statements about the diplomatic meeting mention Haiti, a country on the brink of collapse as street gangs consolidate power.

America’s poorest country has been without a leader for more than 15 months since its last president, Jovenel Moïse, was assassinated.

Haiti’s current group of leaders has called for foreign intervention to restore semblance of stability. Amid anarchy, the country struggles with water, food and fuel shortages and a resurgence of cholera.

According to the United Nations, nearly half of Haiti’s 11 million people suffer from “acute hunger,” including 1.8 million at risk of a food emergency.

In Cité Soleil, a sprawling slum in the capital, 19,000 people are facing a food disaster.

The news channel, citing unnamed sources, said the US is “looking for options to quell violence, confront armed gangs, deal with a mounting humanitarian crisis and respond to a cholera outbreak.”

Those options could include a role for Canada and other countries in the region, Bloomberg said.