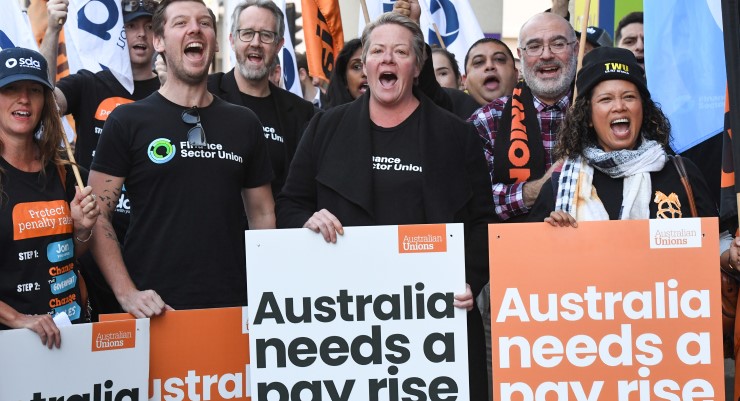 Sandra Bradley writes: I have been a trade unionist all my life, both in my home country and in my adopted country, Australia (“Is the trade union movement dying in Australia?”). I have refused to cross picket lines, been blacklisted for my union activities and bullied into resigning because of them.

It is not without fear or favor that a person remains loyal to a union. I was always a union member while I was employed because it wasn’t just about pay. It was also about the extra benefits that unions make possible, such as sick leave, shift allowance, etc.

I am not a slave and never will be. My labor is mine to sell at a price I see fit. Trade unions enable me to determine that value.

Spin the wheel to see what you win when you sign up for a year Oh dear.

John Savidis writes: Unions have been on the decline for years under Liberal National governments, starting with John Howard who introduced WorkChoices and laws banning industrial protests except during corporate negotiations. The mainstream media in recent years has not been fair or even-handed when reporting on industry issues, such as Patrick Stevedores’ waterfront union dispute.

All anti-union prejudice is also directed against Australian workers, whether they are members or not. I have been a member since I started working. It’s like having insurance for your home and car. Workers need protection from unscrupulous companies that don’t pay taxes like the average worker.

Margaret Ludowyk writes: Other factors contributing to declining union membership include the outsourcing and offshoring of many unionized workers, e.g. banks, telecommunications, utilities; the closure of industries such as automotive and textiles; and short-term contracts for workers such as teachers and nurses.

Jason Bryce writes: I have been a member of the MEAA for decades and now I belong to the 55+ age group. The problem is that unions do just fine without members. They have built property and investment portfolios and have institutional influence through the ALP, ACTU and the Fair Work Commission. Unions don’t need members and members are a hassle. I’ve heard Sally McManus and other ACTU office holders say that Industry Super has 11 million members – as if that were the same or similar to being a union member.

In the 1980s, unions gave up their membership in professions to merge with other faction-aligned unions. That’s when they took their eyes off the ball. There is no organizing. No one visits workplaces and hires employees. Nobody. Zero union workers go out to recruit. Not a single union worker stands on a milk crate in a warehouse parking lot talking about joining in order to get a real raise or a real reduction in hours.

Occasionally a union will operate in a traditional union field, but there are more union workers engaged in factional segregation and ALP issues than increasing their membership. Union membership figures cannot be trusted because no union will admit that it has very few members – losing delegates and influence in the ALP as a result. But they all have money in the bank, so they don’t really care about membership. Does not matter. Employees, of course, are the losers. Wages are far too low and hours worked are still far too high.

Matthew Doyle writes: Our employee group has just completed a hard-fought negotiation of a new company agreement. The negotiations were led by our union, which is funded by members, but non-union employees will also enjoy the benefits of this new agreement – at no cost. What real incentive is there for workers to become paid members of a union if they can enjoy one of the most important benefits for free?

If you are satisfied, angry or agitated, please let us know by writing to [email protected] Please include your full name to be eligible for publication. We reserve the right to edit for length and clarity.