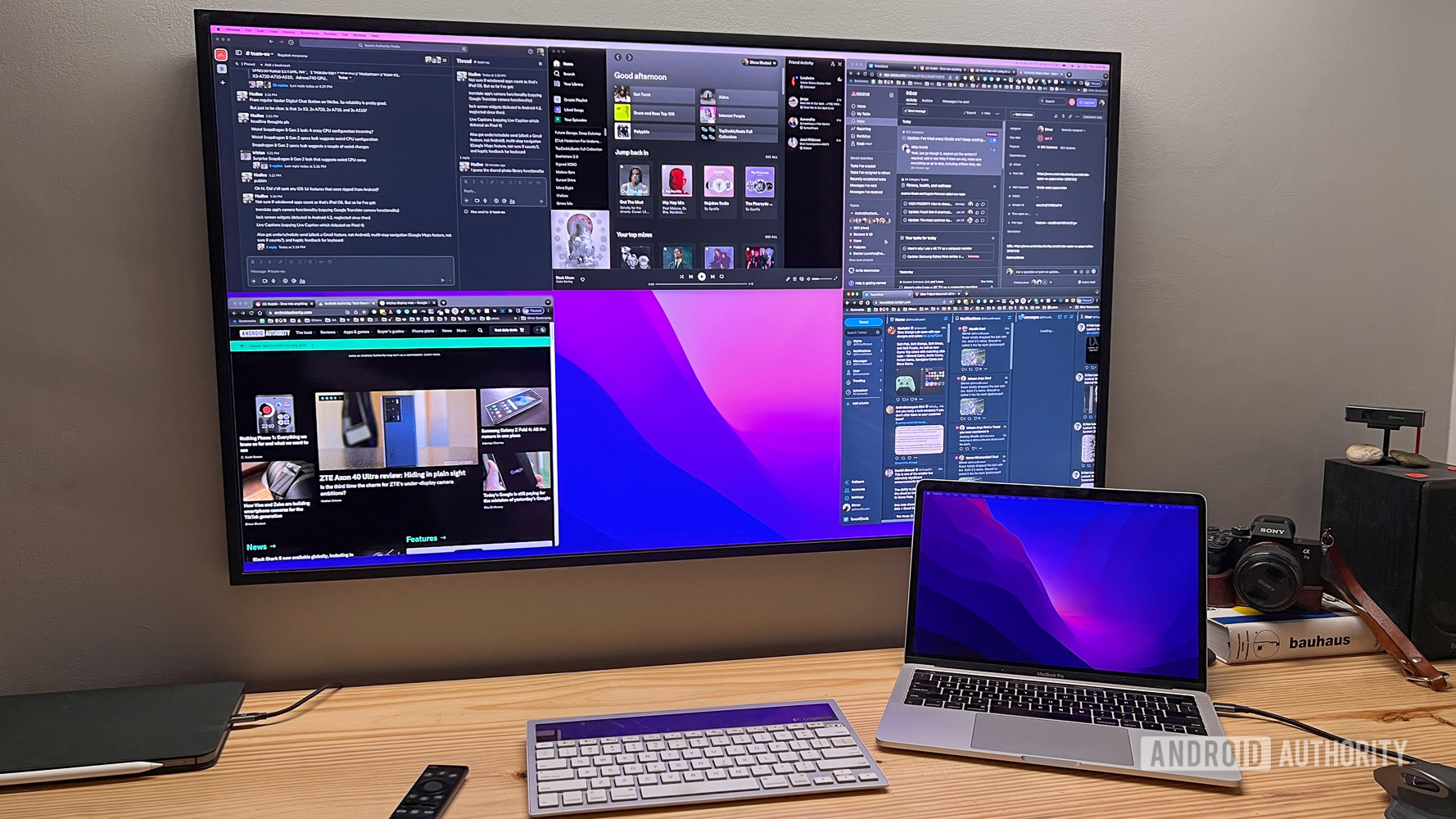 Optimizing for maximum productivity was my main goal when I decided to redesign my home office earlier this year. Like any self-respecting techie, it was clear that a large screen monitor would become the centerpiece of my desk setup. My requirements were clear: plenty of screen space to work with, decent color accuracy and aesthetics. And so began a long journey of researching some of the best ultra-wide monitors out there, as every internet guru says it’s the way to go.

As the headline makes clear, I’ve turned hard to a 4K television instead. This is why.

It is critical to understand how you use your computer right away. Gamers may want ultra-fast refresh rates, movie enthusiasts may need the crazy 21:9 aspect ratios that some monitors afford. But what I wanted was a huge canvas for multitasking.

I am not a PC gamer. My use case is all about consuming large amounts of content, research and writing. On any given day, I have over 40 tabs open, Spotify and Slack running in the background, and maybe a few terminal tabs for all the tinkering I do.

An ultra-wide monitor is suitable for most of those tasks, but is not the ideal solution. Sure, the ultra-wide aspect ratio lets you open things up, well, wide, but most websites aren’t designed with extended horizontal views in mind.

A larger 4K display is almost as good as two ultra-wide monitors mounted one above the other.

My favorite “monitor” ended up being a 43-inch Samsung Frame TV that I picked up in India for about $700. The clean aesthetic and the no-gap wall mount were high on the list of factors that helped my decision. You see, I didn’t want to clutter my desk with multiple monitors. I even wanted to forgo a monitor arm to maximize my desk space.

The Samsung Frame TV hardly takes up any desk space, which was a primary consideration for me when designing my office space.

Mounted on the wall, the Samsung Frame TV barely sticks out an inch and doesn’t invade my limited desk space. I also end up putting it on built-in art mode to browse artworks when I’m reading a book on the armchair behind me, or just spinning some records. It helps diminish the aesthetics of the desk and makes the room a little cozier. Of course, if aesthetics aren’t your primary consideration, you can get a panel of comparable quality for a lower price.

While the Samsung Frame TV certainly doesn’t have the prettiest panel in Samsung’s portfolio, let alone the wider lineup of monitors and televisions on the market, once color calibrated it looks good enough for me and more than adequate. for my photo editing needs. It also lacks high-end features like a refresh rate of 120Hz or higher, but again, that wasn’t a primary consideration for me.

It’s all about productivity

My daily use, as I mentioned, involves dozens of tabs and windows. However, the default window manager in macOS is borderline useless. I use an app called BetterSnapTool to tame how apps behave in different zones of my monitor.

My daily setup varies between five to six windows open at the same time. With a grid of six windows open, I actually get to see six 17-inch monitors. Now, this may sound very small in the present day, but it works perfectly for viewing reference information, Spotify playlists, or office chats.

Reading longer articles, I switch to an alternate configuration where the window takes up the full height of the 43-inch screen, essentially giving me the equivalent of a side-mounted 24-inch monitor.

Of course, being a completely virtual space, you can mix and match screen sizes to your heart’s content until you find the most suitable setting for your use. In fact, as I’ve found after a few months of use, a large monitor like this is best used if you’re looking for multitasking nirvana. Most apps or websites simply don’t scale well to such a large size.

Also read: I bought an ultra-wide monitor for productivity, and here’s what I learned

My colleague Bogdan recently wrote about his journey with an ultrawide monitor. I agree with his statement that an ultra-wide monitor only makes sense if you have a very specific use case. Unless you’re working with tools that can span the width of the monitor, all that horizontal space is often lost. Using a 4K television instead also doubles the height to effectively double the space you need to work with.

There are a number of other benefits to using a television as a monitor. For example, price was a big consideration. Yes, I spent nearly $700 on the Frame TV for the aesthetics, but I don’t have to. The prices of 4K television have never been lower and it is possible to get a very nice television for just a few hundred dollars. In most cases, you will spend a considerably higher amount for a high-quality 4K ultrawide monitor.

Some ideas: The best 65-inch TVs you can buy

Plus, the television also comfortably doubles as a, well, television when I want some downtime and catch up on some YouTube videos or documentaries.

Plus, I found myself taking advantage of built-in niceties like Airplay support to send my iPad’s screen to the TV or smart assistant support for controlling the lights in the room.

Using a TV as a monitor has its drawbacks. Chief among these is the lack of support for modern conveniences like USB-C. The simplicity of using a single cable for video output and charging cannot be overstated, and my setup means I’m still stuck in dongle hell. My old OWC dock doesn’t support 60Hz over 4K, so my only option is to either use two cables or invest in an expensive dock.

You will have to be creative with mounting a webcam on such a large screen.

Built-in web cameras are also out of the picture. I’ve never been big on video calls, but the pandemic has made it even more important. I’m in various briefings or work calls and turning on the webcam helps a lot in picking up visual cues. The television, predictably, does not come with a built-in webcam. Also, if you’re using a screen as large as this, you’ll have to get a little creative with positioning an external web camera. I found that mounting the camera on the top of the screen usually focused only on the top of my head, and I’ve been placing the camera on the side of my studio monitor ever since.

Is it worth using a 4K TV as a monitor?

I’ve spent the past few months with the Samsung Frame TV connected to my Macbook and I can’t say I regret my purchase. The sprawling screen real estate was a dream for catching live streams while chatting with colleagues. Plus, the ability to make six or more windows comfortable has been a game changer for my personal use.

The huge screen real estate has delivered a tangible increase in my productivity and I can’t see myself going back to a smaller screen.

I was initially skeptical about a close viewing distance of two feet between myself and the screen, but that wasn’t really an issue. Still, I don’t think it’s the perfect match for everyone. The lack of high-end features like a 120Hz refresh rate or an ultra-wide aspect ratio makes it a non-starter for gamers. Users with less intensive workflows may also find it a bit overwhelming to get around the scaling problems of such a large screen.

However, I don’t see myself going back to a smaller or ultra-wide screen. The sheer flexibility of being able to arrange windows the way I want for more information density or additional context makes it the obvious choice.

Do you use a 4K television as a monitor? How has your experience been? Let us know in the comments.

Have you considered using a 4K television as a monitor?