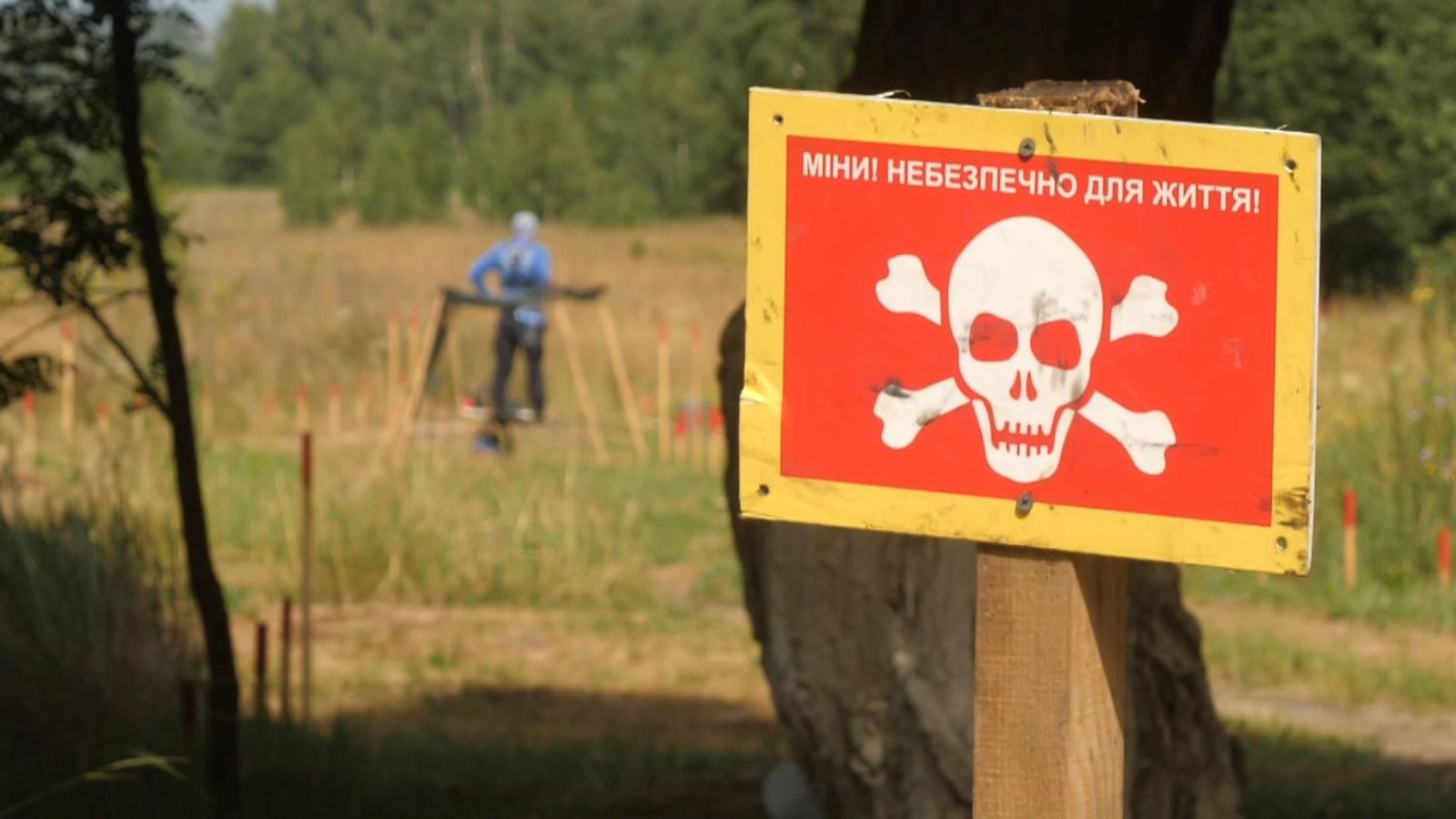 We held on to a narrow strip of safe ground. It is littered with mines left and right.

We followed Vadym Shvydchenko on a dirt road in a rural area near Makariv, west of Kiev. He wanted to show us the wreckage of his truck that was hit by two land mines on this road last month.

He still lies where he was thrown through the windshield.

“The first time there was a bang and there was a crater here. The cabin door jammed, I couldn’t open it,” Vadym says. “And in the second explosion, the windshield was blown out and I was thrown forward by it.”

“And then they found four mines here. They were arranged in a checkerboard pattern.”

Vadym may not have survived in a smaller vehicle.

His livelihood depended on his truck and he has been unable to work since then.

Civilians have learned the hard way that this area is contaminated with ammunition and that it is so unsafe that they are not coming here anymore.

And this is the picture around the world Ukraine†

Fields to be planted with wheat – are covered with ammunition and mines.

Landmine charity Halo Trust has told Sky News that Ukraine is now the deadliest ground in the world for civilians.

“The amount of artillery, missiles, landmines and scattering ammunition now used in Ukraine makes it the most lethal environment in the world for the civilian population. This ammunition is used by the Russians on a very arbitrary basis,” said Halo CEO, Major General James Cowan.

After the mass exodus of Russia‘s troops around Kiev in April, it soon became apparent that much of the ground was heavily contaminated with threats to civilians.

Halo has moved many of its deminers from the Donbas region to the front lines to clear areas around the capital.

We joined a team of deminers in a minefield near Makariv. Locals had reported Russian tanks and soldiers stationed there around a recreational field.

“I don’t see a safe place in this field at all.” A deminer, Olexsandr Popchuk, tells us.

This area is only 100 meters from civilian housing.

Many are still haunted by the arrival of Russian troops in March.

A woman, Olga Kyrylova, who lives in a large family home next to the minefield, shows us her front door full of bullet holes.

“They drove up here and shot at every house, shot at every gate so no one would come out. They said if someone comes out, you die,” she said.

The family was given an hour to leave before Russian soldiers took over their home.

She describes how she lost weight, struggled to communicate due to stress, and how the house shakes every time there’s a controlled explosion in the nearby minefield.

The sound of the mine clearance clearly exacerbates her trauma – and it won’t end anytime soon.

Searching through the grass for tripwires, mines and artillery is a laborious task. A large number of Russian shells do not explode and are buried in the ground. It is estimated that it will take two years for the two teams clearing this field to clear the entire area.

And this is just a small corner of the country that is infested with explosives.

These threats are preventing Ukrainians from returning to the daily lives they had before this war – and it could take decades to clear them all.

Major General Cowan said: “I would like to emphasize in particular that the British also play a leading role in supporting the humanitarian demining of Ukraine. The Foreign Secretary has approved a significant increase in funding for this work in Ukraine, what will live and restore the Ukrainian livelihood.”