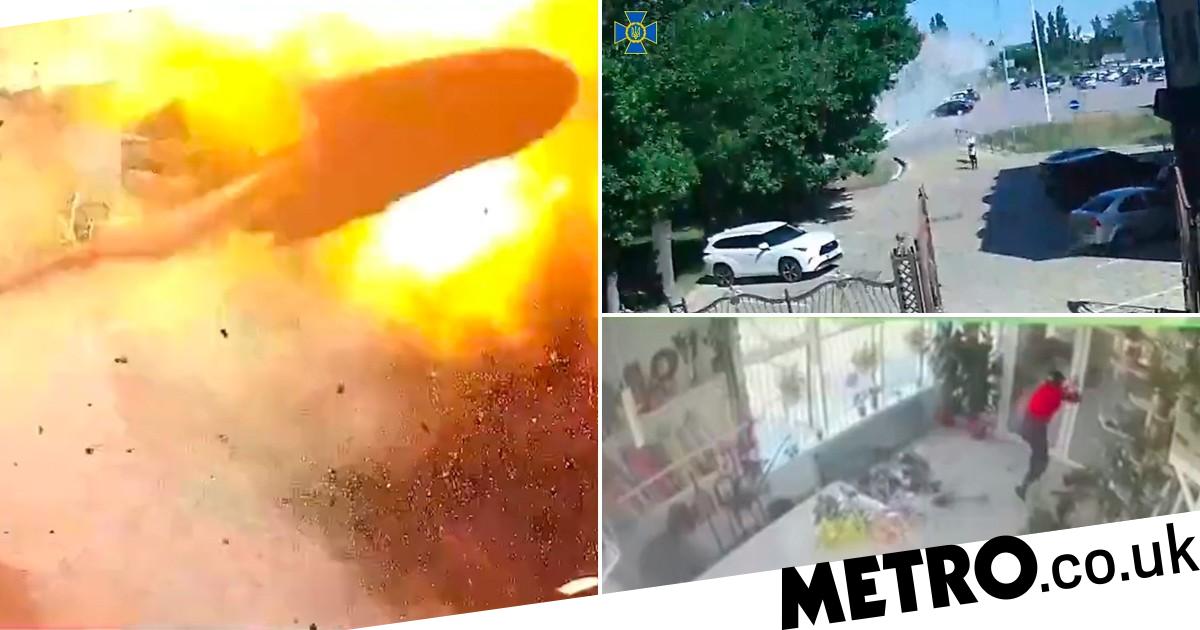 Chilling images from inside and around a Ukrainian shopping center show people diving for their lives as Russian missiles hit.

At least 19 people were killed and more than 60 were injured when Vladmir Putin’s forces attacked the Amstor shopping center in Kremenchuk, central Ukraine, on Monday afternoon.

The Russian defense ministry has denied hitting the mall, but claimed it targeted a weapons depot nearby, after which the explosion started a fire in an empty mall next door.

However, Ukraine has said that the mall was directly hit by Russian missiles and that about 1,000 people were there at the time of the attack.

Now, newly released CCTV footage from inside the shopping complex and surrounding buildings shows how a Monday afternoon search for goods turned into a dire situation.

Two cameras in the same store captured the moment the rocket hit, sending goods flying off the shelves and the storekeeper taking cover.

Two more cameras on the outside of the building showed debris landing on the ground outside the mall.

While a third outdoor camera showed smoke billowing from the building when it was hit, and two passersby narrowly dodging flying debris.

Another camera, overlooking a parking space, captured the rocket for a split second before flying into the building, causing a massive explosion.

The new images, released by Ukraine’s security services, disprove the claim by Igor Konashenkov, a spokesman for the Russian Defense Ministry, that the mall said the mall was “not functioning.”

The Kremenchuk attack overshadowed the closing day of the G7 summit in Germany on Tuesday.

In a joint statement, Boris Johnson and leaders of the US, Canada, Japan, France, Germany and Italy condemned the “appalling attack.”

“We stand united with Ukraine in mourning the innocent victims of this brutal attack,” they said.

“Russian President Putin and those responsible will be held accountable.”

Footage from cameras overlooking the mall released earlier this week showed the moment a rocket hit the Kredmash factory, which stands behind the mall, destroying four warehouses and pouring debris onto passers-by.

While cameras pointed at a nearby park showed how quickly “normal life” turned into hell as debris rained from the sky and people ran for their lives.

Funerals were set to be held Thursday for some of the 19 people confirmed to have been killed by Monday’s Russian missile attack.

Russian President Vladimir Putin denied on Thursday that his troops had attacked the mall, saying that Russia will not hit civilian facilities.

He claimed the target in Kremenchuk was a nearby weapons depot, echoing the comments of his military officials.