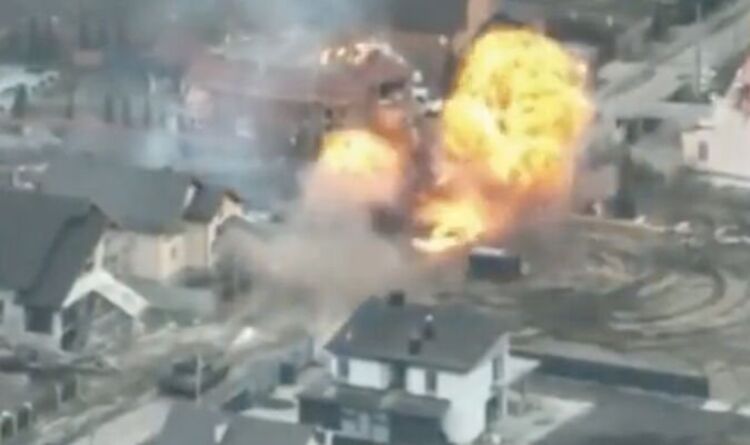 New Ukrainian drone footage has shown the moment Russian tanks and armored vehicles were wiped out in a devastating ambush attack today. Footage shared online showed the column being decimated outside the Ukrainian capital of Kyiv as Russian forces continue to be pushed back by Ukrainian fighters. This comes as Ukrainian troops around Kyiv retake more than 30 towns or villages in the region.

The video shows the Russian tanks attacked in broad daylight before the entire column is reduced to smoke and smoldering fires.

The attack is yet another successful ambush from the Ukrainian forces, which has left President Putin’s forces reeling.

Hours later, a video filmed by someone on the ground in the aftermath of the attack showed burnt out wreckages of what appear to be BMP-2 infantry fighting vehicles and T-72 main battle tanks.

Officials in Moscow had promised to de-escalate attacks in the Kyiv area and refocus on the fight in the east of the country.

JUST IN: Emmanuel Macron: Frexiteer’s fears for France if he wins election

However, experts, including NATO officials, have warned that the Russians could be just falling back to regroup and plan a new offensive on the capital.

Earlier today, the Ukrainian presidential adviser Oleksiy Arestovych told national television that Ukraine was making advances around Kyiv while holding the front line against Russian forces in the east.

He added: “Let us have no illusions – there are still heavy battles ahead for the south, for Mariupol, for the east of Ukraine.”

The Ukrainian leader warned on Saturday that retreating Russian forces were creating “a complete disaster” outside the capital.

He said troops had uncovered mines across “the whole territory,” including around homes and corpses.

President Zelensky said: “They are mining the whole territory. They are mining homes, mining equipment, and even the bodies of people who were killed.

“There are a lot of tripwires, a lot of other dangers.”