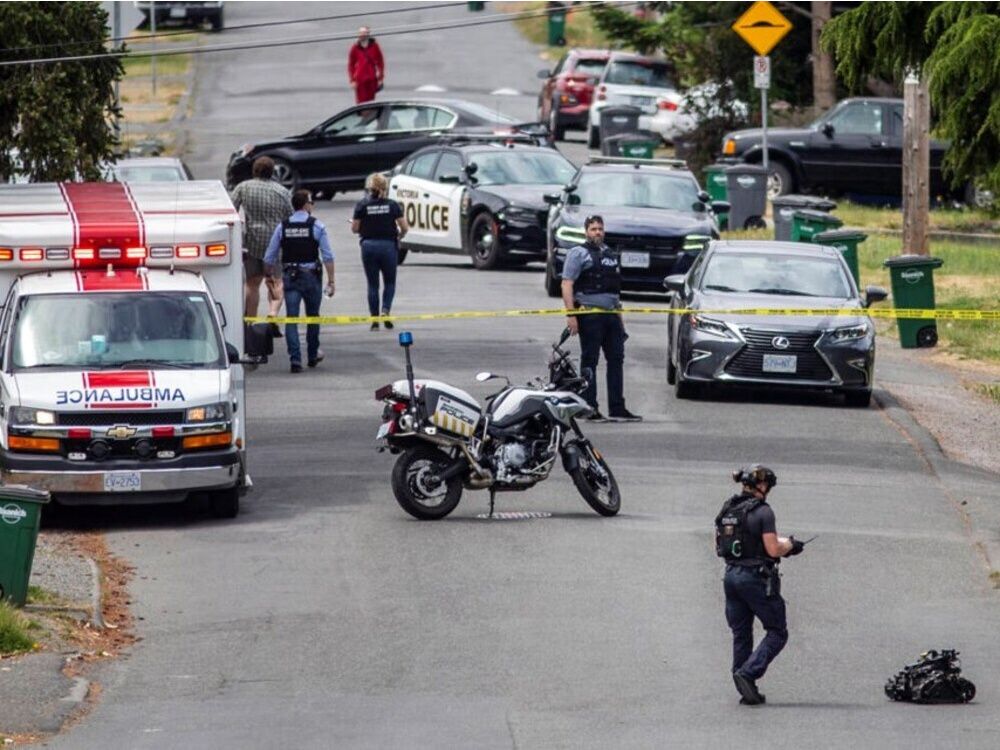 Two suspects were killed and six police officers suffered gunshot wounds in a gunfight at the Bank of Montreal on Shelbourne Street Tuesday morning.

Homes and businesses near the bank were evacuated due to the presence of a possible explosive device in a vehicle linked to the suspects, police said.

It started at 11 a.m. Tuesday when officers from Saanich Police, the Greater Victoria Emergency Response Team and VicPD responded to a report that two gunmen had entered the bank on the 3600 block of Shelbourne Street in Saanich.

Several officers arrived on the scene and found the armed suspects who fired at the police. Two suspects were shot dead by police and died on the spot.

Six emergency response officers suffered gunshot wounds and were taken to hospital, some with serious injuries requiring surgery, a statement from the Victoria Police Department said. It said updates will be provided when they become available.

Three of the officers are members of the Saanich Police Department, while the other three are VicPD members.

Police said they do not believe bank employees, customers or members of the public were injured in the gunfight.

A dark-haired man in a camouflage coat and black boots was seen motionless in the parking lot outside the bank on Tuesday afternoon.

Residents and workers in the area were locked in their homes and offices with blinds down and doors locked as the hunt for a possible third suspect continued.

Just after 12:30 p.m., about 25 people who had been in the bank during the robbery were escorted to a waiting bus by armed Saanich officers. Some were crying.

Dozens of officers from Saanich and Victoria Police Forces and the RCMP remained outside the bank on Tuesday afternoon, along with at least four ambulances.

Shelbourne Street was closed off from Cedar Hill Road past Pear Street, with several marked and unmarked police vehicles filling the street.

Outside the bank were officers with weapons and dog teams.

The public was asked to avoid the area.

At about 1.40 pm a helicopter flew over the area

Charlotte Priest, an assistant at Lifeline Animal Clinic across Shelbourne Street from the bank, said some of the clinic’s clients overheard the shooting and took shelter in the building. “That’s when we realized something was up. So we just closed our blinds and took cover and stay away from the windows.”

A passerby also took shelter in the waiting area, Priest said, noting that a police van was parked in the clinic’s driveway.

“There are many companies in the area. It’s quite shocking that it’s happening here.

“Everyone is a little shaken up.”

Saanich Mayor Fred Haynes posted on Twitter: “Our hearts go out to our officers, bank staff and residents… No words can describe how appalling this is.”

At nearby St. Michael’s University School, a woman said the school was in “hold and secure” mode, with all exterior doors locked and everyone inside.

The Megson FitzPatrick Insurance Services office on Shelbourne Street had about 20 employees inside behind closed doors.

Jacqueline Niemann, who headed the office Tuesday, said she heard noises but didn’t immediately recognize the noise as gunfire. Police cars who arrived on the scene warned their offices about the situation.

Everyone is safe, she said. “It’s pretty scary.”

Hannah Young, a pharmacy assistant at Heart Pharmacy in Shelbourne Plaza, across the street from the bank, said she heard “what was definitely gunfire”. “And it just kept going. I looked outside and saw people ducking from their cars in the parking lot.”

Young said she was not afraid, but concerned for the safety of the people in the area.

‘Should we close the door? Draw the customers in? Shut down? It was more of a fight or flight response,” Young says.

“We saw that it was older people sitting outside and we told them to go in.” They led everyone in, away from the windows, to the back half of the pharmacy.

The Saanich Police Department is asking people who took photos and video recordings to submit them as evidence through their online evidence submission portal.

Jeff Roman, MET spokesperson in Canada, said in a statement that the company was “deeply saddened” by the incident. “The safety and security of our customers and employees is our priority and our thoughts are with every person affected by today’s events.”

Roman thanks the emergency services for their prompt assistance and for helping to protect the population.

The Saanich Police Department is leading the investigation, with help from the RCMP and an emergency response team from the Lower Mainland, among others. Sergeant Chris Garneau didn’t immediately have numbers of RMCP officers from the metropolitan region to be called in.

A police helicopter was also dispatched to assist.

An Island Health official said health teams from Royal Jubilee and Victoria General hospitals have risen to respond to the incident. No details have been released about specific patients.

The Jubilee’s emergency department was temporarily restricted to ensure safety, but neither hospital fell under the code orange, which refers to mass casualties, the official said.

“In situations like these, we quickly redeploy staff as needed and implement contingency plans to ensure our hospitals and staff are best positioned to respond,” said Island Health.

As with all shootings involving officers in British Columbia, the Independent Investigations Office is investigating the incident.