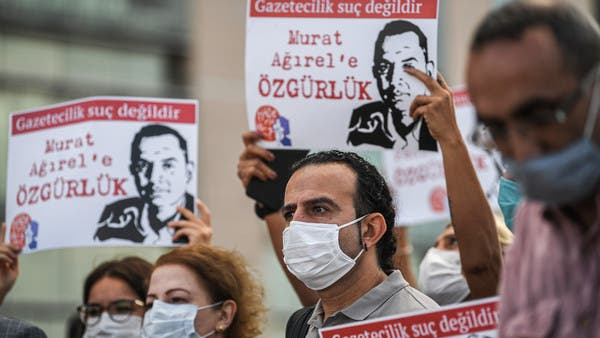 A Turkish court has jailed 16 Kurdish journalists and media workers who were arrested last week after being detained last week and charged with spreading terrorist propaganda, the Media and Law Studies Association and local media said Thursday.

They were held in the southeastern city of Diyarbakir for eight days without being formally charged, with prosecutors twice requesting a reprieve, they said.

Five other journalists detained on June 8 were not detained, according to Demiroren and other Turkish media.

Turkey has jailed more journalists than most other countries in the past decade, according to the Committee to Protect Journalists, and several media groups had condemned last week’s detentions as “brutal”.

On June 8, police in mainly Kurdish Diyarbakir arrested 21 journalists on charges of making propaganda for a terrorist organization about the preparation of television shows broadcast from Belgium and Britain, Demiroren news agency reported.

Demiroren quoted police sources as saying they were investigating the “press committee” of the militant Kurdistan Workers’ Party (PPK) group. The court in Diyarbakir declined to comment.

On Monday, 837 journalists and 62 media organizations issued a statement supporting their detained colleagues and condemning the detention following police raids as “a blow to press freedom”.

It called on the Turkish opposition – which it says is “making claims about justice, justice, equality, freedom and democracy” – to show solidarity with them. It also called on the judiciary to “not become an instrument of the illegitimacy and tyranny of the government”.

The government of President Tayyip Erdogan says the courts are independent.

Turkey ranks a low 149 out of 180 countries on the Reporters Without Borders’s (RSF) World Press Freedom Index, describing it as a country in which “all possible means are used to undermine critics”.