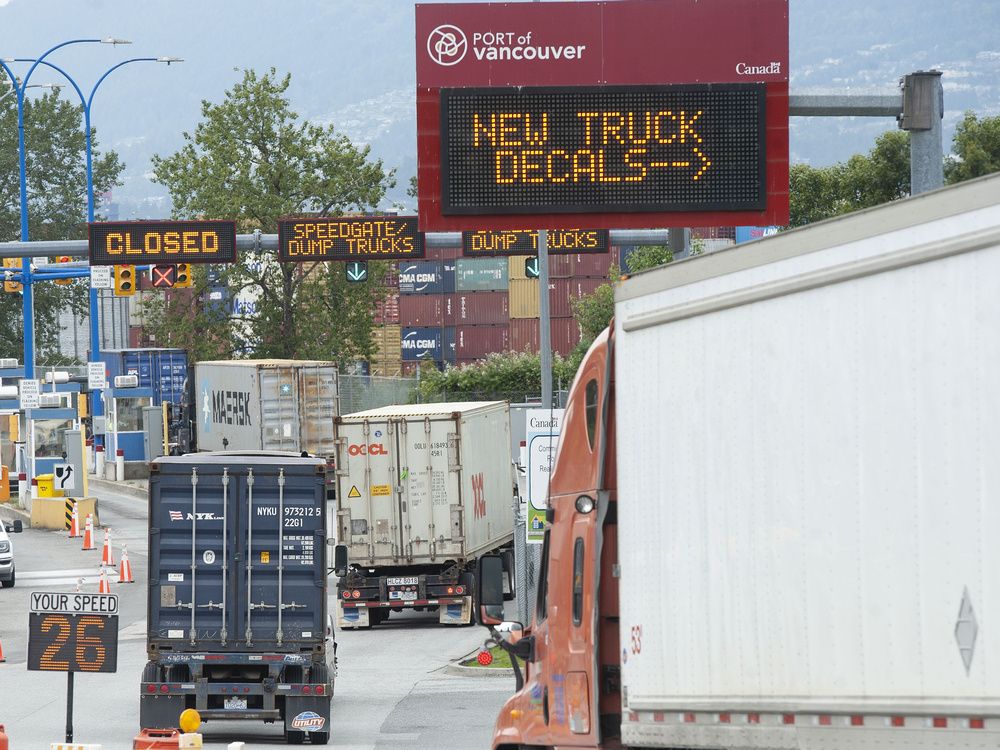 The United Truckers Association voted Friday for action against a recent Port of Vancouver directive banning operators from driving vehicles older than 12 years of age.

Gagan Singh, spokesman for the association, said 639 of the 1,000 members voted to withdraw the service, without voting against.

“I was surprised,” Singh said. “I didn’t expect those numbers.”

Singh said the next step is to “consult our directors and we will talk to the unions about the (job) action date, if we consider it.” Meetings are scheduled for Tuesday.

The truck drivers are angry about the Rolling Truck Age program, which starts on September 15 and will impact about 20 percent of the 1,800 trucks that transport containers to and from ports to reduce emissions.

“These costly measures will place an extreme financial burden on container truck drivers amid the highest inflation and unaffordability in a generation,” Singh told Postmedia.

He predicted new delays in the supply chain at a time when the port is already struggling with backlogs.

The Rolling Truck Age Program has been on the port’s agenda since 2012. In 2015, the port told drivers that the program would come into effect in February 2022.

The goal of the program is to reduce emissions.

However, a month before the program was due to start, Federal Transport Minister Omar Alghabra intervened and asked the port for more consultation with the drivers. Alghabra was concerned that the program would damage Canada’s already fragile supply chain.

At the beginning of June, the port announced that consultations had been completed, some concessions had been made and the program would continue. The port’s decision is supported by the BC Trucking Association.

“Forcing truck drivers with fully paid-off assets that meet all Canadian and BC standards for commercial operations, in terms of safety, emissions and opacity levels, is punishment for a group that is predominantly of South Asian origin,” Singh said.

He also highlighted the Port of Vancouver’s increasing coal exports, which he says generate far more emissions than its members’ trucks.

In an earlier interview, Greg Rogge, director of land operations at the port, told Postmedia that UTA members were invited to the meeting but did not participate. He said the port extended the cut-off date from 10 to 12 years and would allow drivers to continue using their aging trucks while waiting for a new vehicle to be delivered.

He said the port has no intention of canceling the program.

As of September 15, only 16 trucks will be affected by the requirements, according to information provided by the port authority. Over the next 12 months, 271 trucks owned by independent truck owners are to be replaced.

According to the port’s website, old diesel trucks are a major source of particulate matter in the Metro Vancouver region. “We still have some very old container trucks – some over 20 years old – serving the Port of Vancouver,” a fact sheet says.

The program aims to support “safer, more reliable trucks and cleaner air for our communities.”

According to the port, about 80 percent of the trucks serving the port already comply with the regulations.

With files by Lynn Mitges and David Carrigg