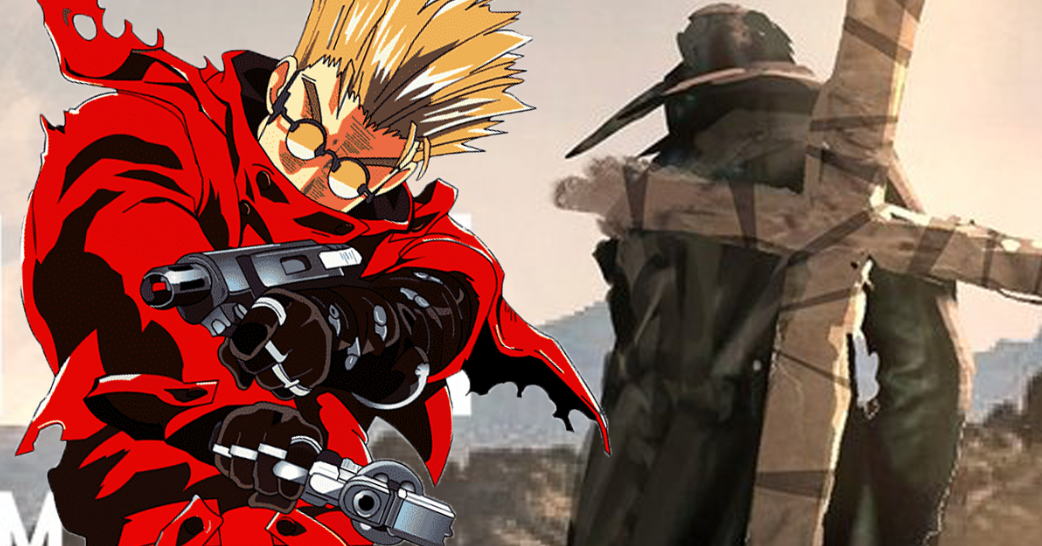 Trigun has been out of the spotlight for a while, but it won’t be long before the gunslinging series is making a comeback. If you haven’t heard, the series creator is teaming up with Studio Orange to bring Trigun Stampede to life, and the reboot will bring Vash the Stampede to a new generation. And thanks to a new poster, we got a first look at the reboot of a very familiar face.

As you can see below, the anime’s latest concept art focuses on a barren scene as a huge city looms in the distance. In the foreground is a figure with a wrapped cross on the back. And for fans, they’ll know that baggage means this figure is none other than Nicholas D. Wolfwood.

A man standing in the desert. While he carries a large cross on his back…#TRIGUN #Trigun pic.twitter.com/UUddEpCyFJ

After all, the cross on Nicholas’s back is hard to miss. The character, also known as Nicholas the Punisher, carried the cross as a shield and weapon. After all, the Punisher Cross includes a machine gun and rocket launcher, along with a slew of handguns. Given the character’s marksmanship, you can see why Nicholas would be drawn to a weapon like this, and it looks like Trigun Stampede will conjure up these images the same way.

Of course, fans are now eager to see how Trigun Nicholas handles his reboot. The anime will launch in 2023 and Studio Orange will bring Vash to life with its iconic CG aesthetic. And as the anime’s premiere approaches, we can expect more familiar faces from Trigun’s original series!

What do you think of this latest look at Trigun Stampede? Will you tune in to this reboot when it goes live? Share your thoughts with us in the comments section below or hit me on Twitter @MeganPetersCB.