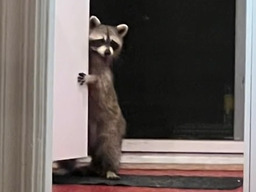 A recent TikTok video by a woman from Toronto shows just how cheeky raccoons can be in the city.

The latest critter went viral for its sheer brutality when it found its way into a Toronto home and startled the homeowner.

“Oh my God, oh my God,” the woman can be heard muttering, before asking the raccoon to “take the f— out!”

She filmed the animal opening a closet door, like raccoons do, before climbing inside.

“Are you serious?” was actually the only logical response.

She cautiously approaches the closet and sees the raccoon’s parent standing outside the screen, before opening the door to reveal the bold baby sitting in a bowl of dog food.

“Oh my God!” says the woman as the raccoon stares at her. “What do you… like, what do you want me to do with you?”

Finally, she closes the tub and takes it outside to release the raccoon to his mother, who she hopes won’t “kill” her.

It’s just another drop in the ocean of raccoon stories in the city. Let’s relive some of the more memorable moments TO has seen of its unofficial mascots.

There was the raccoon making its way behind the counter of the Timmies location on Main St. and Danforth Ave. It was right in the middle of COVID and perhaps the animal thought the built-in mask would be enough against the then indoor mask mandate.

There was the trio of four-legged porch pirates, tearing into someone’s food delivery, because if you leave a hot meal outside (in this case, in a house in the Lower Jarvis St. and The Esplanade area), raccoons believe apparently it’s theirs for the taking. Some raccoons take “door” and “dash” literally.

Raccoons feel at home in Parkdale

In 2019, several masked bandits broke into a house in the Parkdale neighborhood.

A video on Instagram showed four raccoons making their way into an apartment through an open window. The real question: was the place empty or did they surprise the residents?

A raccoon was so desperate for a grooming, it found its way into a locked salon – Ho’s Place near Church and Wellesley Sts. – which was closed for months at the time due to the pandemic.

Then-Mayor Rob Ford was not a raccoon fan, and in 2014 he objected to the city’s “serious raccoon problem,” even talking about his own “run-ins” and “stalemates” with the critters outside his Etobicoke home.

“They just look at you. They’re not scared anymore… they’re getting braver and braver by the day.”

At the time, Ford said he was open to the city to find a way to control the raccoon population, but he was against a citywide cull. “Pfoe!” said every raccoon in Toronto.

The hashtag #deadraccoonto made a comeback in 2020 when a good samaritan created a memorial to a dead man in Bathurst and Dundas Sts. — a nod to the summer of 2015 when passers-by in the Yonge St. and Davenport Rd. area saw a dead raccoon on the side of the road and built an area for others to pay their respects.

Finally, there was the raccoon who felt at home on someone’s floral-print sofa, sunbathing and living his best life. goals.