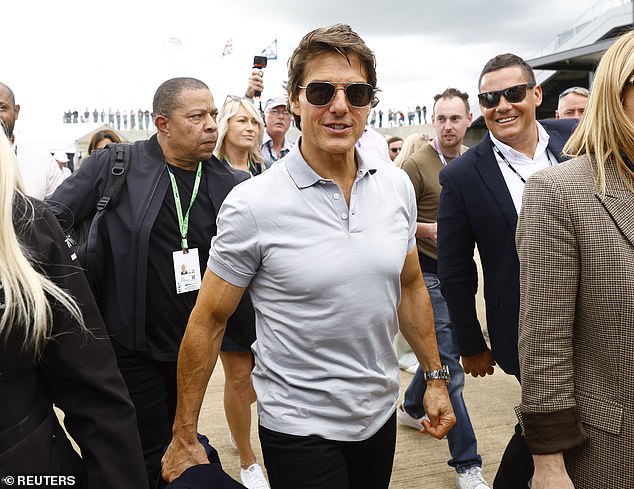 Tom Cruise celebrated his 60th birthday at the British Grand Prix on Sunday.

The Top Gun star put his muscular biceps front and center in a gray shirt as he made his way to the starting grid in Silverstone, Britain.

Tom caught the eye as he chatted with the likes of Gordon Ramsay and Lewis Hamilton’s family.

The star wore aviator-style sunglasses and black pants for the occasion.

All eyes were on the Risky Business star as he sauntered through the grounds, surrounded by his entourage.

He eventually found his way into Lewis Hamilton’s family.

The actor chatted with Lewis’ father Anthony Hamilton while Nicolas, the driver’s younger brother, stood nearby. 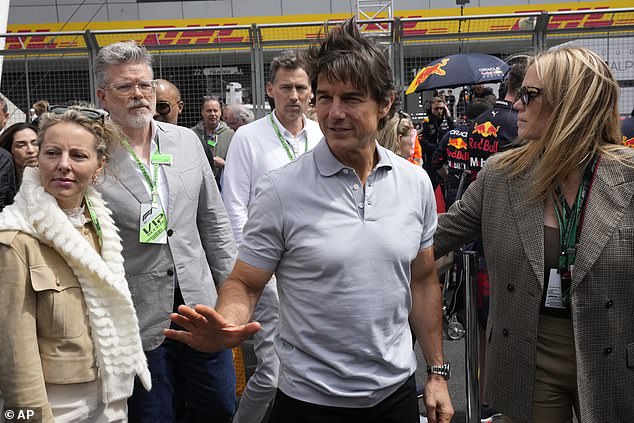 All eyes on him! Even during the action-packed event, Cruise drew attention 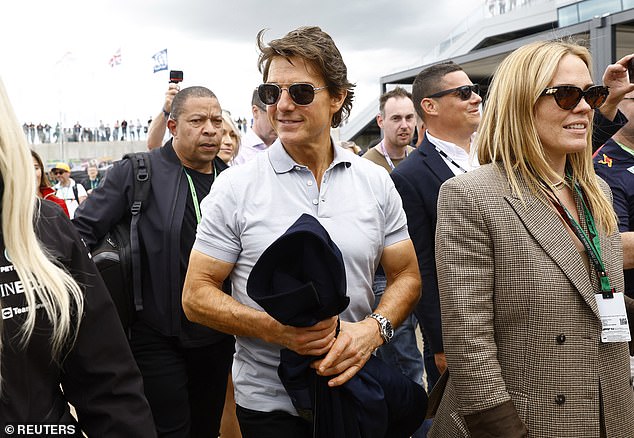 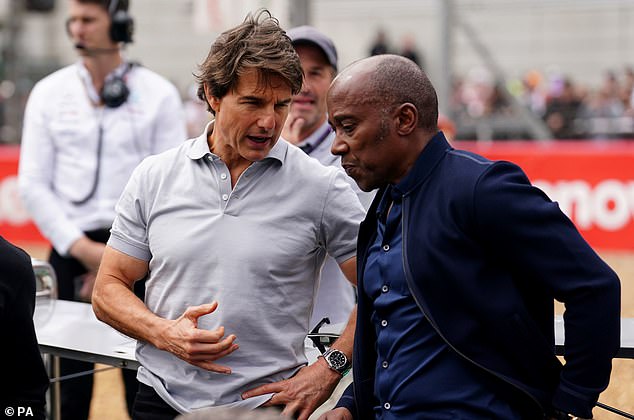 Tom also chatted with Gordon Ramsay, who couldn’t have looked happier talking to the A-lister.

Leading up to his 60th birthday, Tom has made few concessions to his age and continues to star in a series of action films.

At a recent press conference in Cannes, when asked why he still does his own stunts, he replied, “Would you like to ask Gene Kelly why he does all his own dances?” 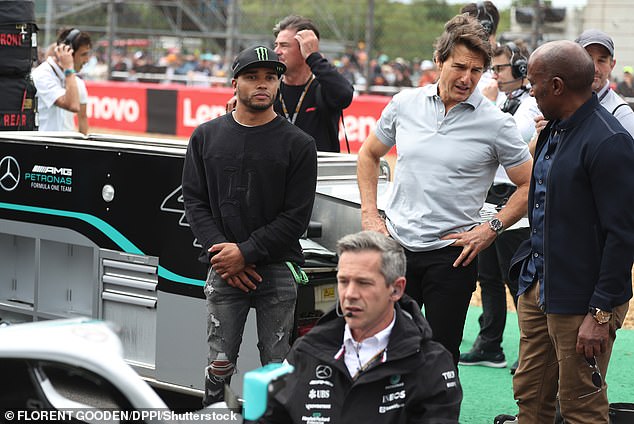 Brotherly Love: Lewis’ brother Nicolas stood nearby while his father chatted with the Hollywood star 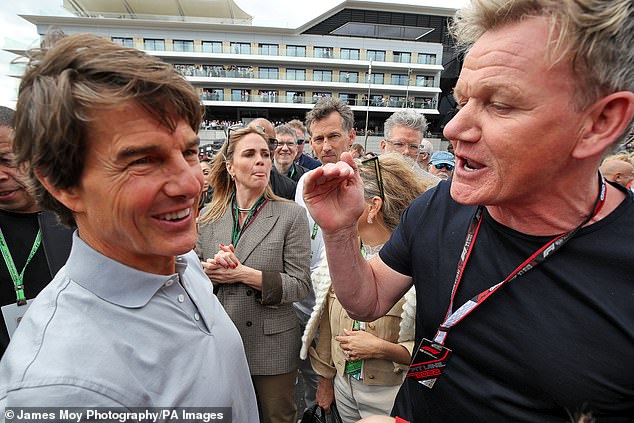 How are you! Cruise also talked to Gordon Ramsay 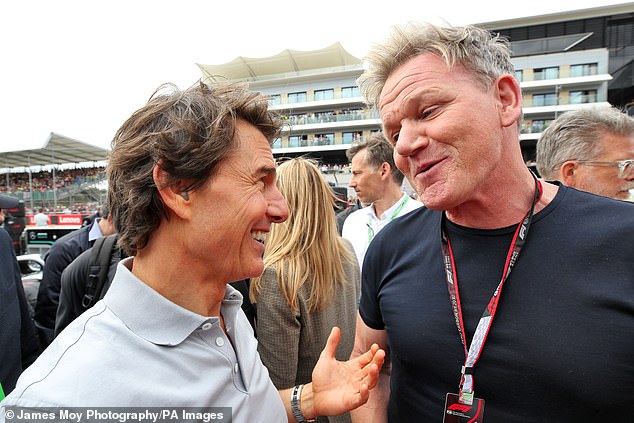 Everything okay! Ramsay looked delighted to chat with the Hollywood icon

At the moment, he cherishes the triumph of Top Gun: Maverick, which became only the second film to earn more than $1 billion since the pandemic kicked off.

The film is also the highest-grossing film of Tom’s career and the first of his films to reach the $1 billion milestone at the worldwide box office.

Tom stars among a cast of newer sex symbols such as Miles Teller and Glen Powell, but the film also briefly reunites him with Val Kilmer, who played his rival in the original.

One of the subplots involves his character rekindling his romance with an old flame played by Jennifer Connelly, who was 15 in real life when the first movie came out.

Tom’s female co-stars from the original film, Kelly McGillis and Meg Ryan, were not rehired to act in the sequel.

In 2019, Kelly, who got sober and retired from Hollywood years ago, candidly discussed that she wasn’t being asked to join Top Gun: Maverick.

“I’m old and fat and I look age-appropriate, and that’s not what this whole scene is about,” she told Entertainment Tonight. 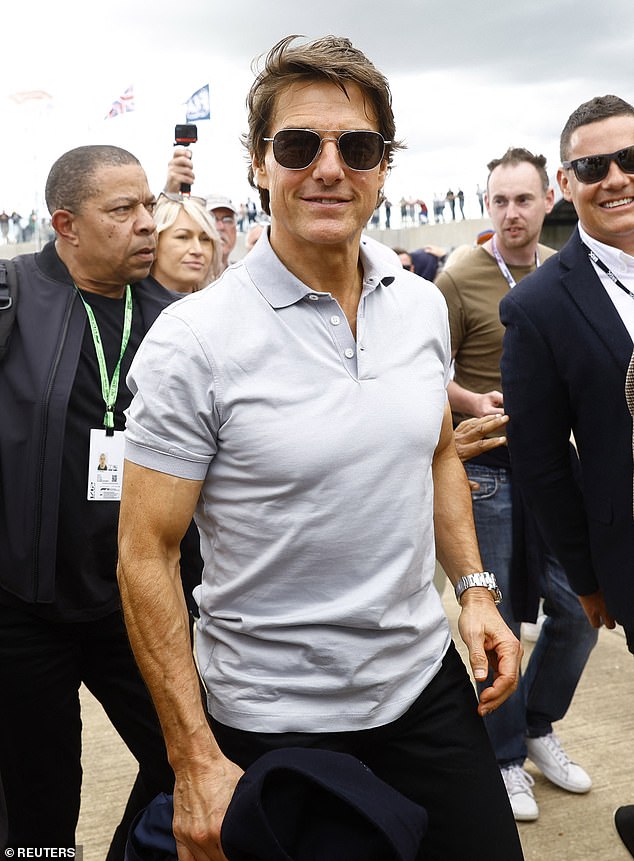 Box office sensation! Currently, he cherishes the triumph of Top Gun: Maverick, which became only the second film to earn more than $1 billion since the pandemic began.