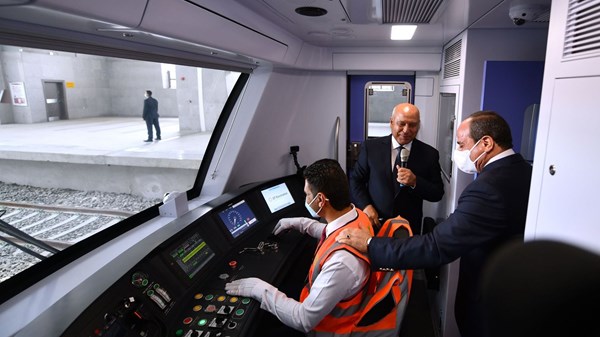 The cost of the LRT electric light rail project “Adly Mansour – Administrative Capital – Tenth of Ramadan” is approximately $2.2 billion, after extending the route of the line to 90 km, instead of 68 km, as 4 stations were added in the administrative Capital and a station in the tenth of Ramadan to reach The number of stations up to 16 instead of 12, and the distance from the start of the line for the light rail project, Adly Mansour Central Station, to the Arts City in the new administrative According to the Egyptian website Al-Ahram Gate, the capital will be slashed in about 50 minutes.

While inspecting the driver’s cab on the train, accompanied by the Minister of Transport, Lieutenant General Kamel Al-Wazir, who told him about the most prominent technological means added to the train, including installing a camera to monitor the driver and monitor his behavior Do you smoke? The driver replied, “No, sorry.”