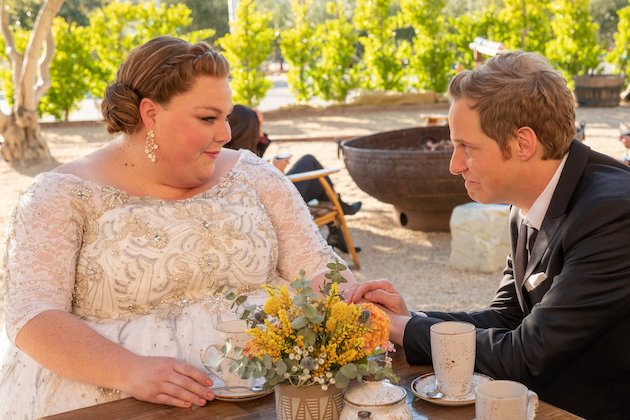 Who, if anyone, Kevin did? slept with, and when did he sleep with her?

That’s the question that comes up on Tuesday This is usand you’ll forgive me if I fixate on it even harder than Madison and Beth do, but the rest of the episode is so crushingly sad I’m thankful for the distraction with both Kev’s junk and his heart – not necessarily in that order .

Look, Rebecca’s Alzheimer’s progresses so quickly to its inevitable and very painful end that it gives her loved ones, in Miguel’s words, “whiplash”. And here’s a terrible realization I had while watching the episode: there are still five years to go before we reach the flash-forward that takes place in Rebecca’s final days. That’s a lot of heartache to endure before the end.

You see what I mean about much-needed levity? Read on for the highlights of ‘The Day of the Wedding’.

HER TODAY, TOMORROW † In a flashback to the time when Kate, Kevin and Randall are six, Rebecca makes an impromptu decision to cut her hair like Princess Diana’s, in an effort to break the routine that she thinks is dragging her down. The kids are less than thrilled with their mother’s new “doing” and Jack’s initial reaction isn’t very supportive either. But after Rebecca explains why she felt the need to break out of the daily monotony—and after Jack points out that their family routine offers him a comfort he never had as a kid living with volatile parents—he decides to have a brash aesthetic choice: he shaves his beard into a mustache. Then he finds a nanny, they go out on a rare Wednesday night date, and he persuades Rebecca to sit at the restaurant piano and sing a song.

WHEN IT’S YOUR WEDDING DAY… LOVE WILL FIND YOU † Then we jump to the day of Kate’s wedding, parts of which we saw in another flash forward of the show. Rebecca is confused when a stylist begins to do her hair, but Miguel gently reminds his wife where she is and what’s going on. When Randall and Kevin stop by and remind her that she’s going to sing a song at the reception, Rebecca seems fine…until she says, “I just can’t wait for your dad to get here.”

Miguel takes it step by step. Randall is deeply upset; he has not seen her to this degree of deterioration. Oh, and it’s unrelated, but it’s discussed in this scene: he’s also now a newly minted senator, who won his election.

In Kate’s room, after Beth and Madison leave to dress the twins, Philip tells his bride-to-be that she looks spectacular… and worried. She admits that she is concerned about Rebecca’s performance. “This is a tune she’s been playing to us since we were kids, and if something goes wrong, she’s going to be devastated,” Kate says.

A short time later, the family reunites for a very early photo shoot – scheduled for early in the day so Rebecca has plenty of time to rest before the ceremony kicks off. Everyone is joking until Rebecca calls Kevin Jack and gets annoyed when Randall corrects her. When Kev moves to his mother’s side, essentially taking his father’s place, a veil falls over the proceedings. Later, when The Big 3 and Philip hang out, Kevin tells Randall that Rebecca is now at the stage where the Doctor suggests going with what she says and distracting her when necessary. The change is sobering for everyone.

MIGUEL SHOWS STRAIN † During the downtime for the main event, Rebecca appears to be brighter, but then thinks Kevin is Jack — props for the show for finding a way to give Milo Ventimiglia some more to do — and Kev is sad about it, but he goes. with it. Meanwhile, Miguel drags Randall along for a wine tasting. It seems odd timing at first, but it becomes clear that Miguel just needs a break from the constant worry and worry that comes with caring for a fading Rebecca. Randall doesn’t realize it at first and calls Miguel when he notices his stepfather’s hand trembling.

Finally Miguel explodes. “It only took me one minute to feel like a human being,” he says, adding that the tremor is a side effect of a drug he’s taking. He also mentions that “everything” – also referred to as Rebecca’s illness – is moving so fast and things are only going to get worse. Ah, poor Miguel!

REBECCA GETS THROUGH † Then it’s time for the ceremony. Everything is going pretty well, and the reception clicks well with Kevin’s Princess Bride speech (which is a dud, although it makes Sophie laugh) and Randalls toasts to how time speeds up as you get older. Randall proposes to his mother and asks her to come to the stage, and it seems things are going badly; Rebecca doesn’t seem to know what’s going on. But then, as Philip predicted, she locks her key and starts playing, and the music just flows out of her. Everyone is crying. (Side note: THIS is the song Rebecca sang to the kids when they were young? It’s so depressing!) When she’s done, everyone cheers.

THE SETUP † Which brings us to the “Who’s the lady in Kevin’s hotel room?” mystery, which many of us have been playing since the wedding’s first flash-forward, but which Madison and Beth don’t get into until they visit his room to buy the twins’ wedding outfits. They find a cocktail napkin with what appears to be a poem written in women’s handwriting that snowballs into their VERY true-crime aspect of searching for clues at the crime scene. They find a bra, shawl, and makeup in the bathroom — though Madison is quick to point out that it’s hers, as Kevin sometimes borrows her foundation. (Beth’s FACE upon hearing this revelation is astonishing.) 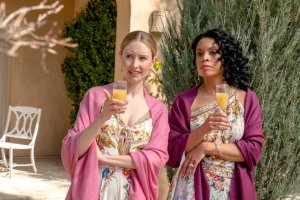 For the rest of the hour, the ladies try to guess which lady spent the night in Kevin’s room. Was it the wedding singer (played by Scandal‘s Katie Lowes), whom Kevin was chatting with during rehearsal? Was it Cassidy, his official plus-one? Or was it Sophie, his ex-wife who is still married to the man she was with at Kate and Philip’s engagement dinner?

Beth and Madison go back and forth on their prime suspect, but are never quite sure. And later, when Randall asks his brother directly what happened the night before the wedding, Kevin says it’s a long story. “Is it a good story?” Randall wonders. Then we see flashes of Kevin walking Sophie, talking to the wedding singer and escorting Cassidy to his room. “I don’t know yet,” Kev says wearily.

Now it’s your turn. What did you think of the episode? Sound off in the comments!