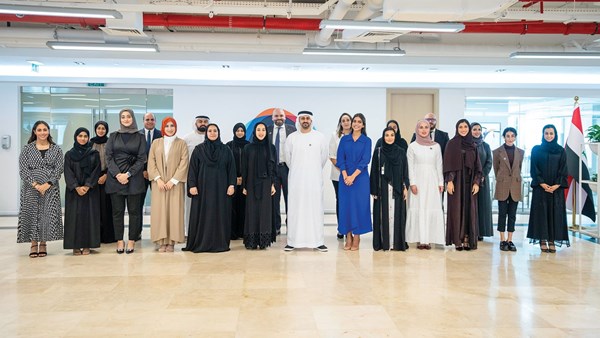 His Highness Sheikh Diab bin Mohammed bin Zayed Al Nahyan, President of the Arab Youth Center, emphasized the role of youth in shaping the future and leading development pathways. This happened during his visit to the Arab Youth Center in Abu Dhabi and his meeting with the members of the centre, where he endorsed the centre’s plan for 2023 and the strategy for the next five years to empower the Arab youth in their country. to make. During the meeting, the Arab Youth Center’s plan for the following year was reviewed in the presence of Her Excellency Shamma bint Suhail Al Mazrouei, Minister of State for Youth Affairs and Vice President of the Arab Youth Center, members of the Center’s team. and a group of graduates and members of the various programs including the development of youth empowerment initiatives with skills and tools that enhance their capabilities. Competitiveness and their leadership potential in technology, scientific research skills, climate action, media, diplomacy, international representation and production of digital and creative content.

His Highness visited the centre’s facilities, was briefed on the most prominent achievements of the year 2022 and the progress of work on ongoing projects, programs and initiatives, met with a number of project managers and listened to team members about the programs and initiatives organized by the center during the United Nations Climate Change Conference “COP 27” in Sharm. The Sheikh in the Arab Republic of Egypt and the youth’s preparations to step up climate action in preparation for the upcoming global climate summit “COP 28” on the soil of the United Arab Emirates.

Empowerment of Arab youth
His Highness Sheikh Diab bin Mohammed bin Zayed Al Nahyan reaffirmed the ongoing commitment of the Arab Youth Center to empower Arab youth to be an engine of development in their society and actively contribute to the process of human progress, based on their abilities and skills, and by taking advantage of the supportive environment to turn their creative ideas into tangible reality. His Highness said: “Young people today are in an advanced position to take advantage of technological development, digital transformation and scientific research applications to lead development trajectories in their societies and build the future they aspire to with the support of their leaders, countries and societies. and motivated by their ambitions that do not know the impossible and their determination that knows no bounds.”

His Highness indicated that the Arab Youth Center’s plan for the year 2023 will be aimed at strengthening identity and Arabic language, building personality, consolidating positive citizenship values, building capabilities and skills, leading to the development of the youth work sector in the Arab region.
His Highness commended the efforts of the Arab Youth Center team, who are eager to share the model of youth empowerment in the UAE with everyone and continuously contribute to the development of Arab youth capacities, positively impacting progress and prosperity of societies in the Arab world.
His Highness was briefed on the achievements of the Young Arab Media Leaders Program, the training program for the Arab Youth Podcast, the Technical Fellowship Program for Arab Youth, the audiobook and blog initiatives, the efforts of Youth Envoys for Development Program members in various Arab countries, and the impacts, plans and programs of the Arab Youth Councils for Climate Change and Scientific Research, in addition to the results of the Arab League for Young Leaders meeting, in collaboration with the World Government Summit, and preparations for the second edition in February.

His Highness led the adoption of the Arab Youth Center’s new strategy for the next five years to focus on four main pillars related to capacity building and focus on skills, promoting positive citizenship, strengthening the connection with the Arabic language and identity, and developing the youth work sector in the Arab region. Provided that the center works in the context of capacity building and skills to provide opportunities for personal development, capacity building and skills refinement through training programs, specialist forums, events, initiatives and joint projects. And that the axis of promoting positive citizenship should be aimed at consolidating the sense of active citizenship among Arab youth in their societies and raising awareness of their responsibilities towards their future and their countries. His Highness stressed the importance of strengthening the bond with the Arabic language and identity, celebrating the creators in the Arab world, supporting the youth research movement and developing knowledge products through which young people enhance Arab culture and its status and contributions regionally. and international consolidation.
His Highness urged the Center’s team and members of its programs to further develop the Arab youth work sector and to work with partners in the League of Arab States and the Gulf Cooperation Council to support their efforts to invest in youth energy and share the Emirati model to empower and engage youth, in addition to building the capacities of workers at the local level in the youth sectors, through technical support and knowledge sharing.

Listen to young people
The Arab Youth Center strategy will support grassroots enablers based on data and studies based on the principle of listening to young people and involving them in designing initiatives, providing solutions and sharing results with all who is concerned with empowering Arab youth in the public and private sectors. sectors..as well as building partnerships by working with governments, companies and Arab and international organizations involved in the Youth labor sector to empower young people and realize their aspirations in various programs and initiatives.