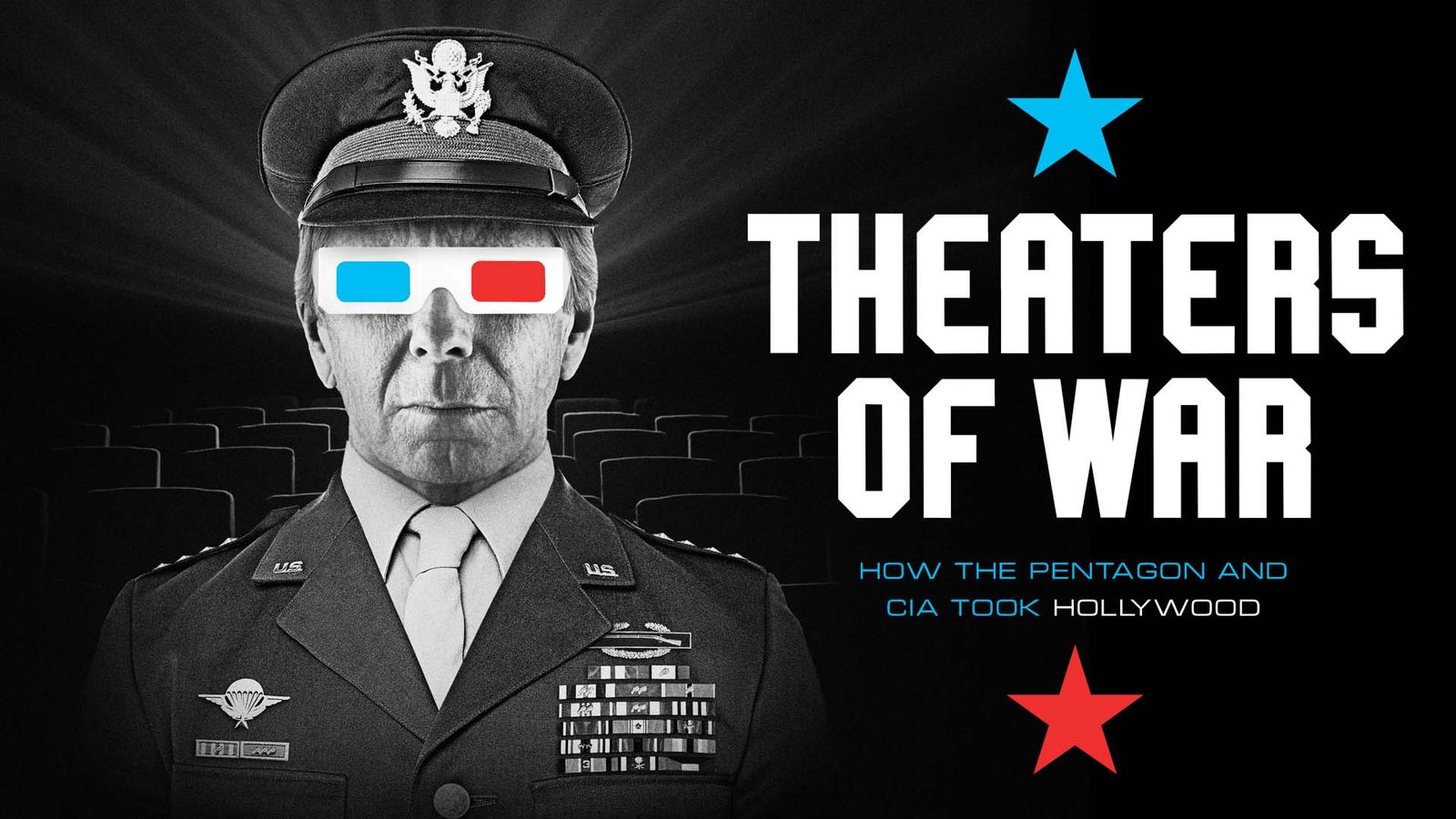 The 2022 documentary Theaters of War: How the Pentagon and the CIA Conquered Hollywood is a chilling revelation of the profound collaboration between the American entertainment industry and the American state apparatus. It shows how Hollywood and other segments of the industry glorify the multi-trillion dollar war machine, condone its bloody global interventions, and attempt to condition the populace into even greater crimes.

The 87-minute film, released earlier this year and available on some streaming services, including Kanopy, is directed, edited and narrated by Roger Stahl, a professor of communication sciences at the University of Georgia.

However, Stahl’s film, which was recently screened at the Barcelona Human Rights Film Festival, has not received the publicity it deserves. This comes as no surprise, but is consistent with efforts to minimize the importance of the Biden administration’s massive increases to the Pentagon budget as part of its military operations against Russia in Ukraine and preparations for a military conflict with China. . Anything that accurately hints at or even raises concern about the real record and catastrophic consequences of US imperialist militarism is brushed aside and marginalized.

Alford, Secker and other academics, along with director Oliver Stone, two Iraq war veterans and others are interviewed in the documentary.

Of course, US military intervention in Hollywood film production is not a new phenomenon. Washington established a so-called Committee of Public Information in 1917 to formulate guidelines for the media and promote domestic support for his participation in World War I.

The film industry responded by promising to provide “slides, film leaders and trailers, posters … to disseminate the propaganda so necessary for the immediate mobilization of the great resources of the country.”

Wings (1927, directed by William Wellman), the first-ever Academy Award winner, received crucial help from the military, paving the way for a spectacular increase in this kind of collaboration after America’s entry into World War II in 1941.

While this is common knowledge, few Americans today are aware of the massive expansion of this collaboration since World War II and the censorship control that the Pentagon and CIA have over much of the mainstream entertainment industry. As Matthew Alford tells Theaters of War“The Pentagon operates like a well-oiled PR machine promoting the most violent and powerful organization in the world.”

Since the end of World War II, US-based filmmakers and television producers who wanted help from the Department of Defense (DoD) or the CIA, i.e. discounted price or free use of military equipment and facilities, technical advice and military staff as extras, must comply with the requirements of these authorities.

Directors and producers must be prepared to have their scripts vetted and then accept any changes requested. “Production Support Agreements” include direct control over subject matter, plot, and character development.

In fact, the DoD’s Entertainment Media Office has a long list of “showstopper” rules that automatically ban all military aid to films featuring war crimes, torture, fragging, veteran suicides, and assaults and racism in the armed forces.

The Pentagon’s interventions are no longer limited to the film industry, but include dramatic television series, cooking shows, endurance competitions and other “reality” programs, as well as video games and social media.

Prior to production, Stahl’s documentary team secured up to 30,000 pages of internal DoD documents, emails, and other materials, revealing that the Pentagon and the CIA exercised direct editorial control over more than 2,500 film and television productions, most since 2001. Commentators previously thought these agencies were involved in only a few hundred films.

Theaters of War begins with the Pentagon’s involvement in Top gun: Maverickwhich grossed $1.48 billion this year, the highest-grossing film for 2022 (see: Top Gun: Maverick – War propaganda made to order for the US military).

Following the military aid it provided Top gun, its 1986 predecessor, the studios allowed the Pentagon’s Entertainment Media Office to edit and modify the script to add key “talking points”. The “Office” also received a special screening of the final result before its official release.

The documentary then traces the evolution of Hollywood’s post-World War II relationship with the military-industrial complex and academic hacks, such as Lawrence H. Suid (Guts & Glory: The Making of the American Military Image in Film [2002]). It also discusses how the CIA founded its own entertainment media agency in the 1990s, which quickly evolved into pitching, advising and even writing some films for the studios.

Oliver Stone tells Theaters of War about his failed attempts to get help for Platoonbased on his own experiences in the Vietnam War, and Born July 4, about the paralyzed Vietnam veteran Ron Kovic. The military categorically rejected Stone’s anti-war scripts, cynically claiming them to be inaccurate.

“The whole ethos of that [entertainment media] office in the Pentagon is that they are supposed to provide accuracy to the filmmakers, but they do the opposite. They produce inaccuracies and lies,” Stone explains. “They only want movies that glorify the American soldier, glorify our patriotism, the homeland and nationalism. [and] this one [sort of] nonsense. They fetishize the military.”

While there are too many examples of the Hollywood/Pentagon-CIA productions to list here, Theaters of War focuses on several high-profile films and producers. These include Jerry Bruckheimer (Pearl Harbor) and Michael Bay (Armageddon) And his Transformers franchise.

Theaters of War has a clip of Bay sitting next to Phil Strub, who ran the Entertainment Media Office for nearly 30 years, boasting about how he has “a direct line to the Pentagon.”

The documentary also examines some multi-million dollar blockbusters such as Godzilla and the Marvel comics Iron Man franchise, who, after Pentagon interventions, reverse the political intent of their original stories and glorify the military, presenting the use of nuclear weapons as a force for good.

As Tanner Mirlees of Ontario Tech University explains in the documentary, science fiction and fantasy “provide a fictionalized imaginary space for the various military melodramas to be written and played, without ever addressing the real motives of foreign policy in today’s world.” or the consequences for those who fight on her behalf and die in her wake.”

Theaters of War also pulls apart The long way home(2017), a television miniseries about the disastrous military intervention of the US Army in Iraq’s Sadr City in early April 2004 that left 60 US soldiers injured and eight killed.

The miniseries was made in close collaboration with the Pentagon, which provided Fort Hood, the largest military base in America, and the inner-city warfare training area, which was remodeled to look like Sadr City and used to film the television production.

Two former US soldiers – Duncan Koebrich and Travis Walker – involved in the action explain how the show blatantly distorts what happened, misrepresenting Lt. Col. Gary Volesky as a front-line hero. They also denounce the program for denigrating Tomas Young, one of many seriously injured.

Theaters of War notes that the US has spent an estimated $8 trillion bombing 70 countries around the world since the end of World War II and refers to the staggering number of deaths and untold suffering. This includes, it says, more than 200,000 deaths in Afghanistan and more than a million in Iraq alone, and about 59 million refugees worldwide.

Despite the powerful material mounted in it Theaters of War, the documentary ends with a call for legislation or legal action to force Hollywood to place a text at the beginning of every film or television show telling the viewer that it was made in collaboration with the Pentagon and/or the CIA. Such an appeal is completely pointless.

While the public should be told who made what they see, this seriously underestimates US imperialism and its military-industrial complex and the threat it poses to basic democratic rights and the very existence of all humanity. Despite this critical weakness, Theaters of War deserves to be made available to the public everywhere. The revelations are a devastating indictment of Hollywood and the entertainment industry leaders who needed little convincing that huge profits could be made by producing wartime propaganda for the US military.

The World Socialist Website is the voice of the working class and the leadership of the international socialist movement. We depend entirely on the support of our readers. Donate today!