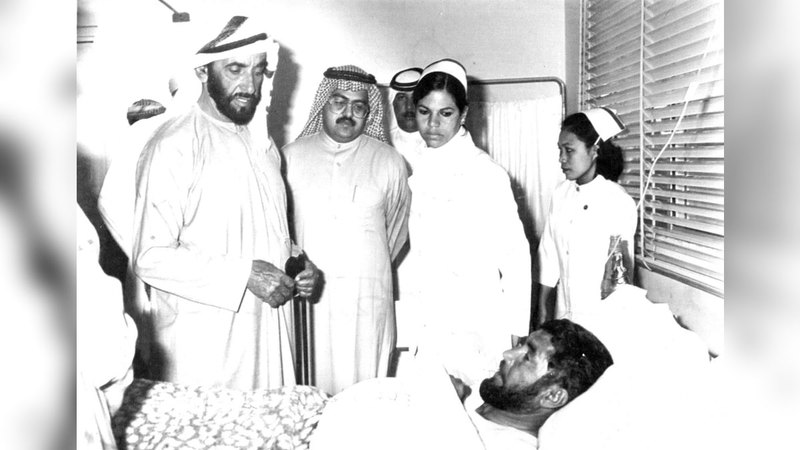 The health sector in the country enjoyed the care and attention of the late Sheikh Zayed bin Sultan Al Nahyan, may his soul rest in peace, who served as a strong foundation infrastructure for a health system, which led the world in its quality and excellence, and served as a protective shield for civilians and residents from disease, and made the UAE a major destination for those seeking Arab and regional hospitalization.

The late Sheikh Zayed bin Sultan Al Nahyan’s approach to healthcare was the cornerstone of a healthcare sector, which managed to dazzle the world, finally, by tackling the “Corona” pandemic, with efficiency and quality that most surpassed countries of the world.

During the era of the late Sheikh Zayed, the health sector in the country passed through several major stations, where the beginning was the establishment of the Central Hospital at the end of the 1960s, such as the scattered clinics in the area of the Central Hospital at that time formed the core of the hospital, which witnessed several expansions, until it became From the main hospitals, then hospitals and health centers spread over all parts of the country, until their number increased to 37 hospitals, and more over 110 health centers spread across different regions of the country.

Health services during the era of the late Sheikh Zayed bin Sultan Al Nahyan received unlimited support as he was eager to provide the necessary support, using all available opportunities to provide advanced health services and deliver them to all regions of the country including villages and remote areas. The Ministry of Health strives to provide comprehensive and distinctive health services with ease and convenience, utilizing the latest diagnosis, treatment and prevention methods to keep pace with global developments.

In implementation of the guidelines of the late Sheikh Zayed bin Sultan Al Nahyan, may his soul rest in peace, and his follow-up and unrestricted support for the health care sector, the Ministry of Health has succeeded in limiting and eradicating the spread of childhood diseases many diseases, including polio, tetanus and others, and the death rate has fallen.

Since the declaration of the union and the establishment of the state, the late Sheikh Zayed has sought to provide health services to citizens and residents, and to build an advanced network of modern hospitals and model health centers that provide diagnostic, curative and preventive health services in accordance with international standards. for citizens and residents of the home country.

The late worked to increase the number of health institutions, including hospitals, pharmacies, medical shops, health centers and maternity care centers, and the number increased significantly in a short time to reach what they are today, and in 1997 the UAE was ranked first among eight countries in the Middle East and North Africa, in the fields of health care and women’s advancement, and have worked to deliver and leverage all available capabilities to provide advanced health services to all regions of the country and remote areas.

The late was credited with establishing universities dedicated to teaching medicine and health sciences in the various emirates of the country, and the first medical college was opened at UAE University in May 1984.

Statistics and reports indicate that, in the early 1970s, health services in the country were limited to seven hospitals and 12 health centers, or about 700 beds, to cover the entire country. In the early 1990s, an active movement began to build health facilities in the country, so that the number of hospitals exceeded 50 hospitals, with nearly 6000 beds, in addition to 160 government pharmacies, more than 700 medical warehouses according to the 2007 census, more than 109 primary health care centers and 124 An annual United Nations report confirms that the UAE ranks first among eight countries in the Middle East and North Africa in terms of health care and the advancement of women, as it number of doctors reached 1530, which is equivalent to one female doctor for every three families.

In the same year, 66 surgeries were performed in various specialties, and the country was ranked fourth out of 78 countries in health, education and social services efforts and programs.

During his reign, he established health centers in schools to increase care for students, and the health system made great strides in preventive medicine, the most prominent of which was the adoption of the “primary health care” approach to bring health to all. by the year 2000, and from this approach the program calls “comprehensive immunization” against infectious diseases, participating in food prevention and ensuring clean water, and paying special attention to ports, airports and borders, to cope with incoming diseases. A division was also established for occupational health, maternal and child programs, aged care, common chronic diseases such as hypertension and diabetes, and drug rehabilitation and control programs.

• Zayed wanted to expand the number of hospitals, pharmacies and medical warehouses.

Zayed said about the homeland

• The homeland expects a lot from us and the people look forward to our work.

• Fathers contributed to the building of this nation, and it is our duty to build it up for future generations and to continue the path of the ancestors.

• The citizen’s first duty is to work day and night to elevate his level, thus raising the level of his nation, and this citizen should not be convinced that he has graduated and accepted his position , and then does nothing.