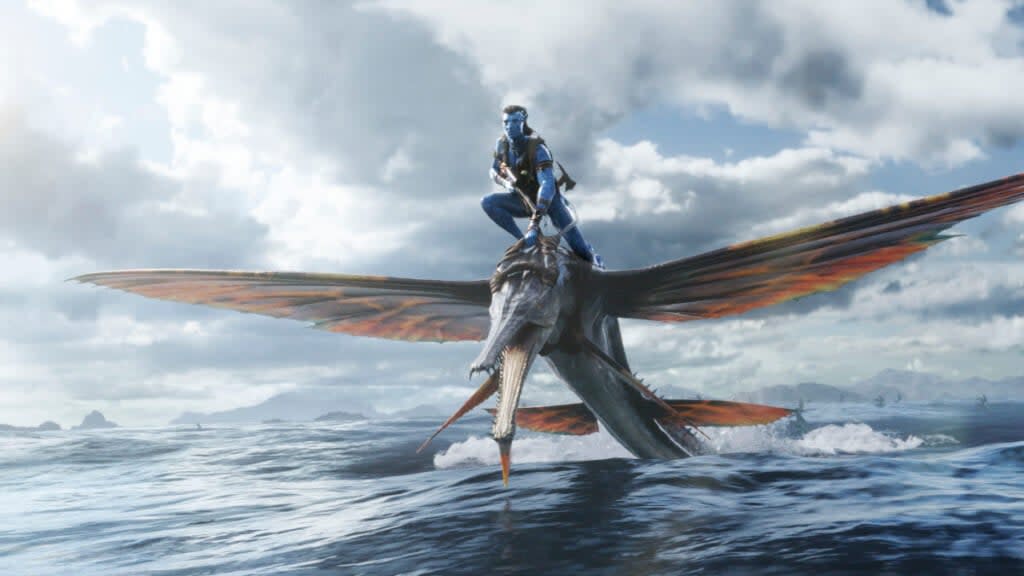 The teaser trailer for James Cameron’s “Avatar: The Way of Water” broke viewership records when it debuted online in May, but if you saw the film before the Disney-Pixar’s “Lightyear” screenings, you may have noticed it was there. looked a little different.

To clarify, the ending of the “Avatar: The Way of Water” teaser trailer features a major hero moment: Jake Sully (Sam Worthington), on the back of an aquatic creature, rising out of the water (the creature has wings). Over Jake’s shoulder hangs a serious-looking assault weapon. You can tell he’s ready for battle. Parallels can immediately be drawn with the climax of the first film, where Sully pitted the dragon-like banshees against more advanced machines (we imagine the evil Resources Development Administration is on the other side of this skirmish, in high-tech maritime vehicles). You can watch that version of the trailer here:

In the version that came with “Lightyear”, Jake doesn’t have a gun at all, but rather a long spear. The implication is clear: “Lightyear” is a movie for kids (although a movie with quite a few firearms, er, laser tag) and they didn’t want a weapon in the trailer. (“Lightyear” opened a few weeks after the Uvalde massacre and sensitivity is high, as evidenced by the content warning that preceded Disney+’s “Obi-Wan Kenobi.”) It’s an understandable change, but we still found it odd . (There’s another shot in the weapons trailer, but we couldn’t tell if it was changed or removed.)

Apparently the change from rifle to spear was mandated by the Motion Picture Association of America. In order for the trailer to appear before PG-rated movies, the change had to be made. (The modified version of the trailer will also play before “Minions: The Rise of Gru,” which will be rated PG this weekend.) The recording will remain unchanged for the theatrical release of the film this Christmas.

Customizing trailers and other marketing materials is not uncommon (the MPA oversees everything from billboards to printed materials such as posters and advises based on the intended audience). They only suggest the change; how the studio (in this case, Disney) chooses to approach those suggestions can vary. The reason this change in the “Avatar: The Way of Water” trailer stood out is because it required new animation and took pride of place in the trailer itself.

“Avatar 2” is arguably the most important film on Disney’s 2022 release calendar. An infinitely delayed, feverishly anticipated project and one of the crown jewels of Disney’s takeover of Fox’s assets (note that a sprawling, state-of-the-art ‘Avatar ‘land is part of Disney’s Animal Kingdom in Florida).

The MPA hasn’t rated “Avatar: The Way of Water” yet, but the first 2009 film — which was produced and distributed by 20th Century Fox — was rated PG-13 for “intense epic battle scenes and warfare, sensuality, language and some smoking.”

Also read:
‘Lightyear’: Everything You Wanted to Know About Sox (But Were Too Afraid to Ask)