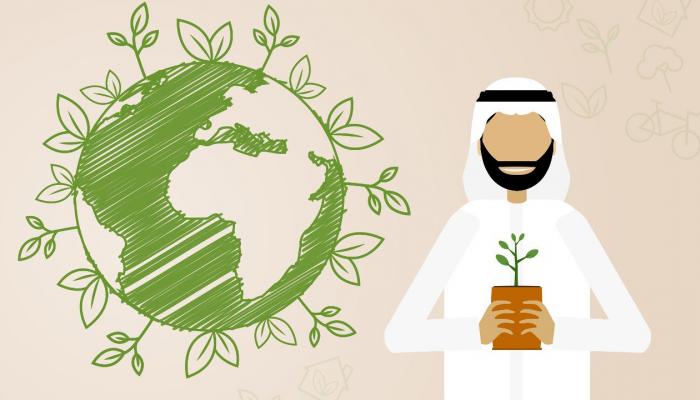 On Friday, the UAE celebrated the world to celebrate Earth Day, which falls on April 22 every year.

Earth Day is an opportunity to boost international efforts to address the challenges of climate change the world is witnessing and its negative impacts, reflected in the threat to biodiversity, air and ocean pollution, rising temperatures, flooding and other manifestations .

Globally, concerns are growing about the impact of biodiversity loss: according to United Nations estimates, the world is losing about 4.7 million hectares of forest every year, while the number of animal and plant species currently threatened with extinction is estimated at one million .

Global temperatures continue to rise as the past three years have been the warmest on record, while concentrations of key greenhouse gases continue to rise, while the oceans suffer from acidification and deoxygenation, severely affecting marine life, especially fisheries.

The opportunity comes this year and the UAE has managed to transform into a knowledge platform that can contain everything related to the climate change database of knowledge, data and strategies, qualifying it in recent years to maintain its position as a prominent player in the regional and global level in managing and tackling this sensitive file.

The UAE’s announcement of its target to achieve climate neutrality by 2050 was the culmination of the country’s efforts and advance in climate change efforts at the local and global levels over the past three decades since its accession to the UAE Framework Convention. United Nations on Climate Change in 1995.

The initiative will open up new opportunities for sustainable development and economic progress, as well as help to consolidate the country’s position as an ideal destination to live, work and create prosperous societies, as the UAE will invest more than 600 billion dirhams in clean and renewable energy. to 2050, and will play its global role in combating climate change.

On November 11, the UAE won the confidence of the world to host the twenty-eighth session of the Conference of the Parties to the United Nations Framework Convention on Climate Change COP 28, to be held in 2023, in a move that will expand the global appreciation for its efforts on climate sustainability.

The UAE secured a large majority of the votes of the countries that expressed confidence in hosting a major session that contributes to the global adoption of an economic orientation that supports climate action, and motivates the international community for greater cooperation and acceleration of efforts to meet the challenge of climate change.

In 2021, the UAE unveiled a series of practical initiatives to address the challenge of climate change at a global level, including announcing a roadmap to achieve hydrogen leadership, which identified three main goals, represented by opening new ones. sources of value creation by exporting low-carbon hydrogen and its derivatives and products to key import areas, fostering opportunities for new hydrogen derivatives using low-carbon steel and sustainable kerosene, among other priority industries that contribute to achieving climate neutrality by 2050.

The UAE launched the “Agri-Climate Innovation” initiative, a major global initiative led by the UAE and the United States of America, with the participation of 30 countries. The initiative, with initial commitments of $4 billion, aims to accelerate work on developing climate-smart food and farming systems over the next five years. The UAE has pledged an additional $1 billion in investment as part of this initiative. .

The UAE continues to make global efforts to address the challenges of climate change by hosting major events and events that provided an overarching platform for senior officials, decision-makers and experts from around the world, such as the Regional Dialogue on Climate Change that was launched last year. organized by the UAE April improved the level of cooperation and coordination of the response of the countries of the Middle East and North Africa to climate change, while Expo 2020 Dubai hosted dozens of events, meetings and seminars mainly focused on the topic of climate and biodiversity.

The UAE annually hosts the activities of the Abu Dhabi Sustainability Week, the Climate Forum at the World Government Summit, the World Green Economy Summit and the annual water technology, environment and energy exhibition “WETEX”, in addition to the permanent headquarters of the International Agency for Renewable Energy “IRENA”.