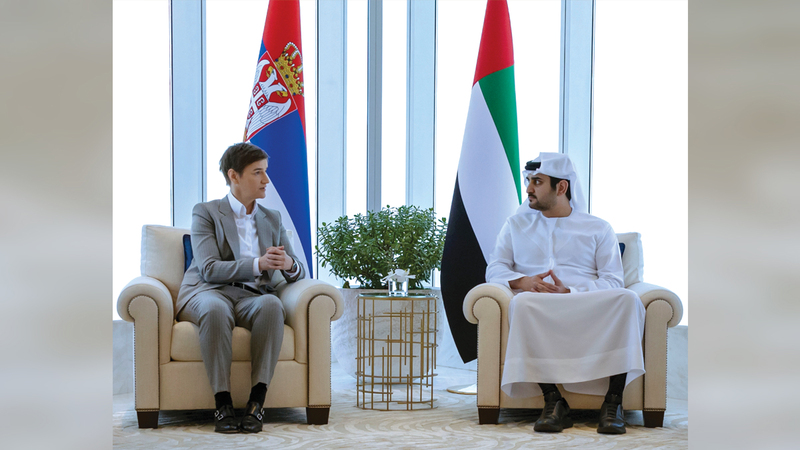 His Highness Sheikh Maktoum bin Mohammed bin Rashid Al Maktoum, Deputy Ruler of Dubai, Deputy Prime Minister and Minister of Finance, confirmed that the UAE, headed by His Highness Sheikh Khalifa bin Zayed Al Nahyan, President of the State, and the guidelines of His Highness Sheikh Mohammed bin Rashid Al Maktoum, Vice President of the State Prime Minister and Ruler of Dubai, she has developed a global model for building partnerships aimed at modernizing government work on future foundations that ensure the improvement of the life of communities and building a better future for future generations.

This came during the reception of His Highness Sheikh Maktoum bin Mohammed bin Rashid Al Maktoum, yesterday in Dubai, the Prime Minister of the Republic of Serbia, Anna Brnabic. At the meeting, they discussed ways to improve cooperation and partnerships between the two friendly countries on areas of common interest.

His Highness witnessed the signing of a bilateral cooperation agreement in the field of government modernization between the governments of the UAE and the Republic of Serbia, with the aim of improving the exchange of knowledge, sharing successful experiences, enhancing the capacities of government cadres building and government best working practices.

His Highness said the UAE leadership believes in the partnership and cooperation approach to advance government work and consolidate a new generation of governments leading societies on the path to creating the future, developing their work in sustainable and proactive base that anticipate challenges and come up with innovative solutions for the rapid changes the world is experiencing.

His Highness added that bilateral cooperation in the modernization of the government with the Government of the Republic of Serbia confirms the excellent relations that unite the two friendly countries, and embodies the guidelines of His Highness Sheikh Mohammed bin Rashid Al Maktoum, to strengthen partnerships and broaden the horizons of cooperation with governments around the world to strengthen government frameworks, through the exchange of experiences and the participation of successful experiences to empower governments and increase their readiness for the future.

The bilateral cooperation agreement in the modernization of the government was signed by the Minister of Cabinet Affairs in the Government of the UAE, Mohammed bin Abdullah Al-Gergawi, and the Prime Minister of the Republic of Serbia, Anna Brnabic.

For her part, Anna Brnabic said: “We are witnessing a milestone in the close bilateral relations between the Republic of Serbia and the United Arab Emirates, where the two countries share a focus on technology, innovation and creativity.”

She added that “The cooperation agreement will make great progress in the fields of artificial intelligence, digital government, digital economy and innovative industries, as knowledge sharing is the foundation for the close relationship between the two countries, and under the leadership of President Aleksandar Vucic, Serbia looks forward to more achievements that the two friendly countries can achieve together to lead the future.” †

The bilateral cooperation agreement between the governments of the UAE and Serbia is the result of a series of joint meetings and fora and mutual visits between the UAE and Serbia, which agreed to share the successful experiences between the two governments in developing and modernizing government work, and take advantage of it to improve the efficiency and performance of the government work system, by focusing on nine key axes that are part of working together to increase readiness for the future and find innovative solutions to challenges.

It is worth noting that the “Government Knowledge Exchange Program”, launched by the Government of the UAE and overseen by the Ministry of Cabinet Affairs, consists of three main axes, namely the development of individuals, the development of processing methods and tools, and the development of systems, and the program aims to strengthen global partnerships for the exchange of knowledge. And experiences and successful experiences in government work, to map future paths and create proactive solutions to the challenges facing governments. faced by taking advantage of the exceptional experiences developed by the UAE in public administration.

The Cooperation Agreement between the Governments of the UAE and the Republic of Serbia is a new addition to a series of global agreements that the Government of the UAE has signed with several countries in the region and the world, as part of its commitment to improve to serve their societies, through bilateral cooperation agreements and memoranda of understanding in government modernization and development and transfer of successful government experiences Distinctive experiences in government work, raising performance levels, strengthening government excellence system, building capabilities and competences, preparing generations of government leaders, and developing the experience of delivering government services including Egypt, Jordan, Iraq, Sudan, Iraqi Kurdistan, Uzbekistan, Senegal and Costa Rica, Greece, Colombia, Spa nje, Seychelles, Maldives, Guyana and Barbados.

• “The UAE leadership believes in the partnership and cooperation approach to advance government work and consolidate a new generation of governments that will lead societies in creating the future.”