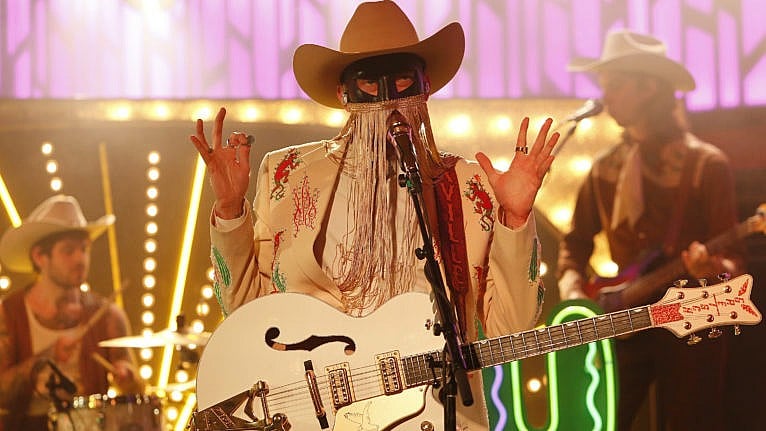 Wchicken Orville Peck First appearing on the country music scene in 2018, he wore a Zorro-esque mask, hid his mouth behind a tasseled fringe and dressed in fetish leather. His debut single, big skya moody, ethereal song with meshy guitar soaked in reverb, sounded like it was coming out of the Twin Peaks soundtrack. It certainly didn’t fit into the beer-guzzling pop country of the Nashville vending machine.

And it was about a boy.

“Fell in love with a rider / Dirt king, black crown,” Peck sang in the first verse, inviting listeners into his lonely western universe. “Six months on a knucklehead pig / I like him best when he’s not there.”

Peck was unlike any other act in country music. He was openly gay but adamantly anonymous and refused to reveal his real name or show his entire face. He always wore a cowboy hat and often wore tight, brightly colored shirts and jackets—often sleeveless, to show off his wiry, tattooed arms. His gaze immediately conjured up and eschewed the traditional image of a cowboy: muscular yet reserved, sexy yet conservative. The rural world had yet to warm up to an openly gay crooner, but Orville Peck proved impossible to ignore. In the past five years he has signed with a major label, performed with some of the world’s most famous musicians and released two albums. His newest, broncotaking it on the road through Canada this summer is further testament to its unique appeal.

Who is Orville Peck? (Photo by Julia Johnson)

That he made such an immediate and powerful impression is testament to his theatrical sensibilities. Though he has never revealed his identity, Orville Peck is widely believed to be the alter ego of Daniel Pitout, a South African-born Canadian musician who has gone from punk drummer to stage actor to the world’s greatest most mysterious cowboy crooner over the past 15 years. . He is a talented singer, but more importantly, he is a calculated aesthete. Peck has committed himself to a cartoonish persona, turning his public life into an endless performance.

Peck grew up in the badlands outside of Johannest. He was a lonely child, friendless and bullied, so he clung to old movies: Clint Eastwood spaghetti westerns and The Lonely Ranger, films about outsiders who become heroes, anonymous vigilantes who come out of nowhere and save the city and charm the girl and still choose solitude. At the age of 15, Peck’s family moved from South Africa to Vancouver. Peck has said in interviews that he played in punk bands in his youth. Pitout, his suspected alter ego, was the drummer for the Vancouver band Nü Sensae, who gained some recognition in early 2010 but took a hiatus in 2014 after deciding to pursue an acting career in England. He entered a two-year acting program at the London Academy of Music and Dramatic Art and landed a part in a 2016 West End production of Peter Pan goes wrong†

Peck composed the songs that would appear on his debut album while living with his parents and working two jobs, rehearsing in his limited spare time and auditioning for record labels. He managed to bluff a contract with legendary independent label Sub Pop by lying about having a full band.

big sky was released through Sub Pop in late 2018. The song made a small but effective splash, thanks in large part to Peck’s ridiculous shtick. Orville Peck’s shoegaze-esque outlaw country focuses on that word that precedes ‘hero’ – being is a lonely, lonely world, and on big skythe classic country cowboy faces an existential crisis of personal decomposition,” wrote one critic in To stick magazine at the time. big skyand the singles that followed caught the attention of producers on CBC Radios Q and Jimmy Kimmel Live! He performed on both shows, raising his profile, introducing the mainstream audience to an outsider’s take on country music and preparing audiences for his first big statement as an artist: his debut record.

That album, titled Ponycame out in 2019. The 12 songs were related to big sky, with slow guitar and lyrics about loneliness, yearning and riding into the sunset. The songs are often good and occasionally great. There are times when Peck’s voice lacks persuasiveness, as if he hasn’t completely committed himself to his character. But he has a unified sonic vision, and his performance was compelling enough to endear him to listeners and critics alike. He was soon claimed as a Canadian, earning a Juno nomination and a spot on the Polaris Prize longlist; his fan base also grew internationally and included other artists. He was invited to tour North America with indie superstar Lord Huron. His gamble had paid off. He made his living playing a character, a character more engaging than the music itself.

In 2020, Peck kissed Sub Pop goodbye and dropped the EP Show Pony, his first release on the much glossier Columbia Records. The sound is shinier and more country; it’s not hard to imagine Show Pony blares from the radio in a Dodge Ram on a dusty Mississippi road. There’s even a catchy duet with Shania Twain. Peck had transformed from Canadian indie weirdo to bona fide rising country star. Harry Styles brought him onstage at Madison Square Garden in 2021, and Lady Gaga had him cultivate her song Born this way for the 10th anniversary of the reissue of her eponymous album. 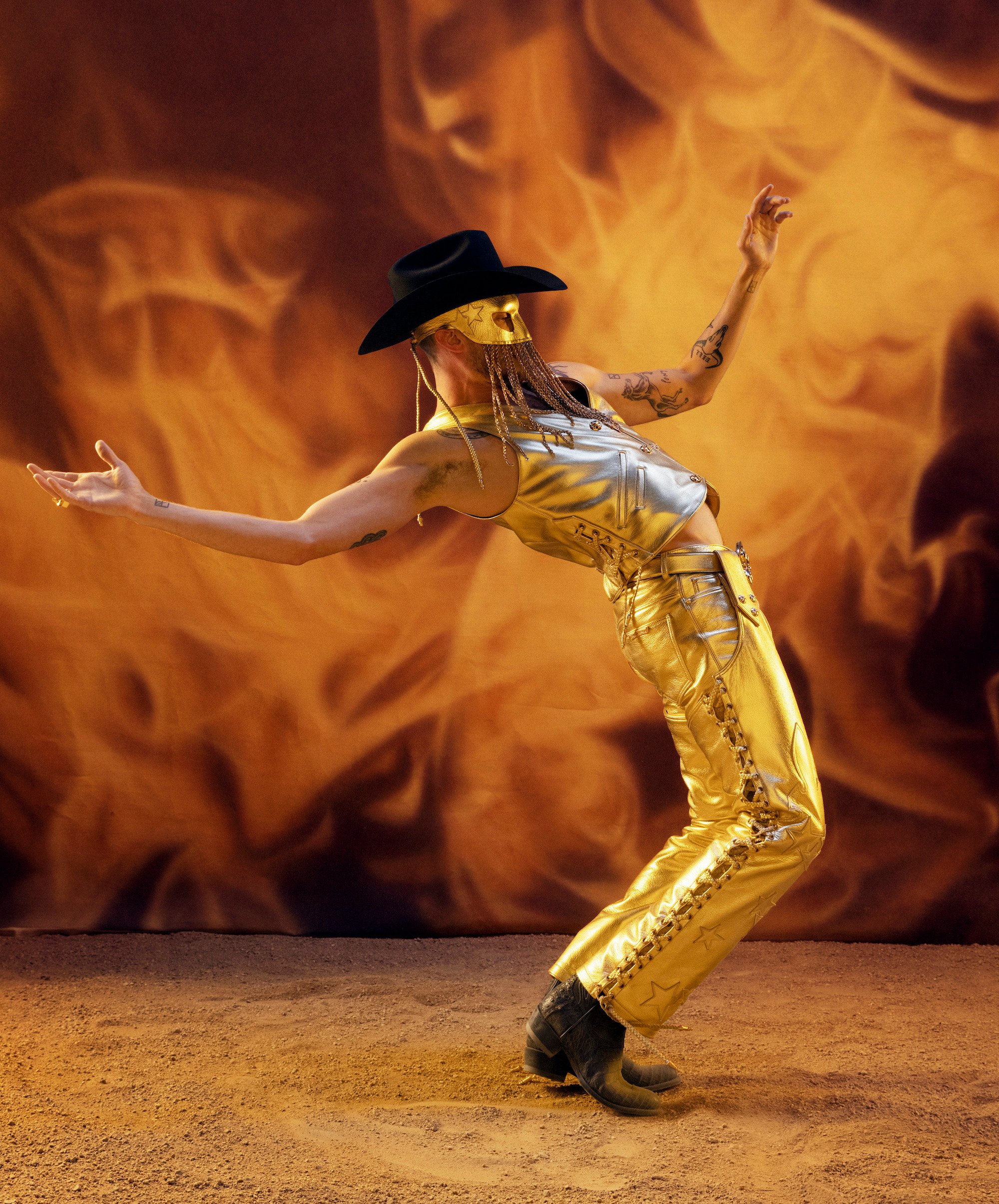 In 2022, Peck released bronco, his first full-length album with Columbia. And then something funny happened: the music started to fit the persona. bronco is a throwback, a glamorous cross between Ennio Morricone’s spaghetti western scores and Johnny Cash’s troubadour sensibilities. The vocals combine the quiver of Roy Orbison and the purr of Elvis Presley; the lyrics are personal and sometimes heartbreaking. Peck is finally in charge of his character, filtering his real feelings through the man behind the mask.

In interviews, Peck comes across as sociable, funny, sharp and self-aware. Along with its queerness comes a wonderful sense of playfulness; he talks about his love for John Waters movies and pop music. He is highly articulate in a way that seems like he’s choosing polished words to get his point across. It feels like he’s calling you in but keeping you at a distance. It seems that he does and does not perform at the same time; he is both the fictional Orville Peck and the creator of Orville Peck, the person who came up with the whole masquerade.

And it works. Peck’s star has continued to rise ever since bronco came out. The album was released to critical acclaim and the accompanying tour is set to hit theaters across North America and Oceania this summer, culminating in a two-night stay at Toronto’s Massey Hall in August. “I don’t consider myself anonymous at all,” he says in the short YouTube documentary The Story of Orville Peck† “This is just an expression of who I am, deep in my heart.”

RELATED: Faouzia Could Be Gen Z’s Next Big Pop Star

Like any good country singer, Peck is a Dolly Parton student, and like any semi-decent gay man, he’s a Whitney Houston supporter. Fittingly, then, his most devastating live performance is one he gave in 2019 in a New York City studio, a cover of a song his two idols share. Peck wears an intoxicating denim jacket with “Versace” on his chest, and he crawls in I will Always Love You† It’s a simple and authentic performance, without the neon cacti and bombastic bands he normally plays with. It might be the closest thing to the real Orville Peck we’ve seen yet. He doesn’t hit all the notes and his guitar chords aren’t always on tempo, but his Parton-esque spoken delivery of the song’s tearful bridge sounds positively mournful. Peck’s eyes close through the holes in his mask, music seeps through his body. The last chord sounds, that last “you” is in the air.

This article appears in print in the July 2022 issue of: maclean’s magazine. Subscribe to the monthly print magazine here or buy the issue online here.