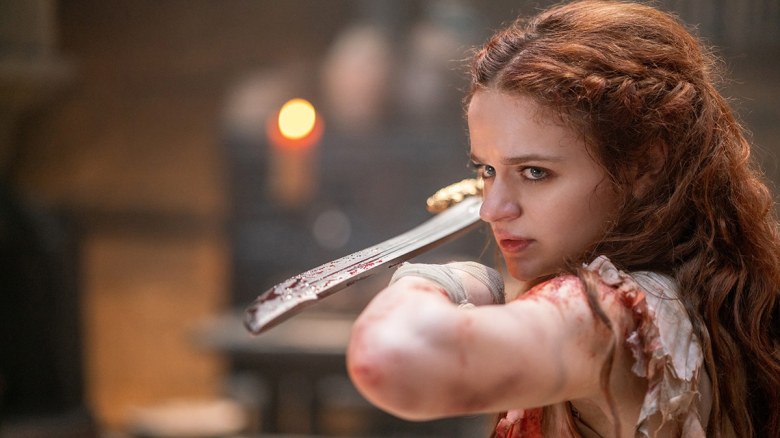 Captured by an evil lover, a princess fights her way through a castle tower in a Hulu Original that you must race to your local AMC.

There’s something remarkable about watching a 90-minute movie that has only one idea spread throughout its entire runtime – “what if ‘The Raid’, but about a fairytale princess trying to fight her way down from the castle tower where she locked up by an evil suitor?’ — but my awe at what passes for a movie these days was no match for my disappointment in this one. Hulu’s bland and excruciatingly basic “The Princess” wastes a ton of talent on a direct-to-streaming cheapo that’s so undercooked it feels like an AMC psy-op designed to have you rushing to the nearest multiplex and begging for a ticket to whatever’s in The Next Even Gru feels good in a place like this.

While the survivors of Netflix’s “The Kissing Booth” trilogy may have been conditioned to expect just as much from the latest Joey King vehicle (though she hardly feels responsible for this mess), anyone familiar with Le-Van Kiet’s bot is Crackling “Furie” prone to feeling let down by the talented Vietnamese director’s anonymous first swing at a Hollywood action movie. Despite an “R” rating, some “John Wick” bona fides, and a few welcome beatdowns from returning collaborator Veronica Ngo, “The Princess” packs almost every punch.

Beggars can’t expect to be the chosen one during a summer movie season that has already cut COVID to its knees, but that’s not enough incentive to sit through a woefully generic beat-em-up that confuses the simple premise for a sufficient plot, and mistakes his canned girlboss attitude for a personality.

Not when you could watch a shell with shoes On(!) in a room with 100 strangers, being ravaged by an Elvis biopic that offers unlimited spectacle for under $20 a pop, or sticking your face in a bathtub-sized bucket of popcorn while Tom Cruise repeatedly cucks death yourself for your entertainment. And Surely not when “The Great” is there on Hulu to satisfy all your royal needs with extreme bias, “Good Luck to You, Leo Grande” is full of much more satisfying action, and “The Bear”, well…that is just a good show (Ayo Edibiri, Jeremy Allen White, and endless warm Italian sandwiches? In my time we would like to have been right a of those things).

But I didn’t come to praise other Hulu properties, but to bury ‘The Princess’, so let’s take care of business. To the credit of Ben Lustig and Jake Thornton’s blueprint of a script, the film’s ultra-generic nature is inherent in its design, at least to some degree. This fable is not about a princess fighting back against her jailers, but rather over the Princess – a graceful and helpless trope desperate for a man to save her – is rebelling against those odds. That idea isn’t exactly smart enough to justify the film’s almost complete lack of detail or texture, but it would be wrong to ignore the fact that “The Princess” is deliberately trying to turn its barebones character from a bug into a feature film. If only it were such a fairytale.

Of course, King’s character is never identified outside of her role in the (also unnamed) kingdom. The medieval princess wakes up handcuffed to a bed in a tower of the castle where she has lived all her life, all alone, save for a few vague memories of being locked up there by the man she was to marry (Dominic Cooper slams it as Julius, the sociopathic husband-to-be). The princess had begged her father to call her his heir and keep the throne in the family, but the patriarchy can be so stubborn.

Anyway, a pair of rapists enter The Princess’s bedroom, complaining that she must be kept “pure” for the wedding, to which the heroine responds by breaking her own thumb to slip out of the handcuffs and then release the shackles. use as a pair of nunchucks to break open the henchmen’s heads. The bloodshed never approaches the level of an Iko Uwais movie, but I appreciated how quickly Kiet illustrates why this thing wasn’t made for Disney+.

From there, “The Princess” unfolds along the lines of a classic arcade game, to the extent that it feels less like a legit summer movie than one of the quick coins Konami made to cash them in. The princess fights her way through the tower, one indistinguishable level at a time, with each floor punctuated by an eminently skip-the-line cutscene in which Cooper yells at leading the people in fear and/or makes sex eyes at his leather-clad enforcer (a whipping Olga Kurylenko, whose role is essentially just eyeshadow in search of a character).

Even worse are the occasional flashbacks to the combat training the princess received secretly from her kingdom-dwelling fighting master (Ngo) when she was a child, the most painful of which ends with the teacher begging her student to remember that “true power comes not from your knife, but from your heart.” Bad movies often leave you wondering who they’re made for, but this one definitely begs the question by alternating sub-YA dialogue with “Mortal Kombat”-esque action, which may appeal to some tweens eager to take advantage of the movie. The fact that the MPA can’t enforce its ratings at home, but anyone intrepid enough to seize control of their parents’ Hulu account shouldn’t settle for this (psst, kids: try clicking that button with the text “Demolition Man”).

The fight scenes — clumsy, frantic and choreographed with just enough artistry and intent to make you feel Kiet’s frustration at not being able to do more with them — are way too slow and repetitive for “The Princess” to get away with so little else to do. offer, but they are bruised and kinetic enough to prove the involvement of “John Wick” mastermind Derek Kolstad in the project. And if they fall flat, it’s not because of a lack of trying. Joey King isn’t completely confused with Keanu Reeves (and the short scenes where the rookie is asked to fight side by side with Ngo are downright cruel), but she gives it her all; each swing feels wired well in advance, but you wouldn’t want to be on the receiving end.

In fact, there are few actors who can be expected to carry a film that does so little to cheer them up. It would be hard to find a fantasy film that does less about building a world, either with its story or its sets; every floor of the tower looks like the same combination of plastic wood and fake gray rocks, making you wonder why 20th century studios bothered filming this in bulgaria when the middle ages is much closer and complete with its own free set of knights). Kiet struggles to make something out of nothing – most notably during a lengthy battle in which the princess battles dozens of bad guys along the tower stairs – but the combat is too clumsy to rise above the level of a theme park.

“Someone has to teach you your place,” an anonymous red shirt tells the princess before beating him up. Alas, there’s no question where this cheesy filler belongs, as Hulu’s latest Original ironically typifies the worst (and must be offensive) tendencies of a time when streamers try to take the throne by force rather than trying to give movie audiences what they want. want.

“The Princess” will be streaming on Hulu starting Friday, July 1.