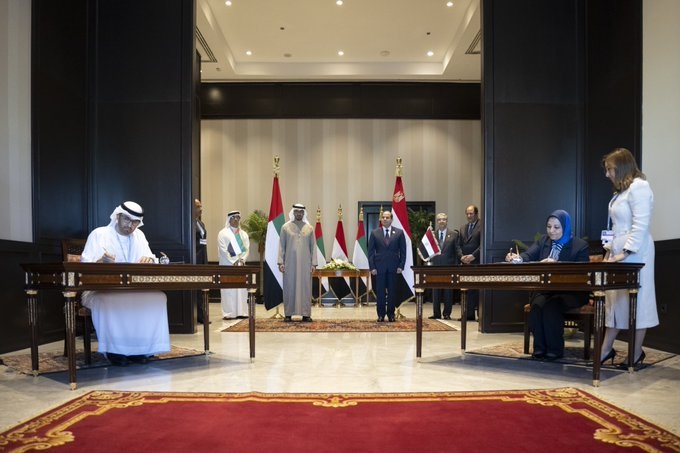 His Highness Sheikh Mohamed bin Zayed Al Nahyan, President of the State, and His Excellency Abdel Fattah El Sisi, President of the sister Arab Republic of Egypt, witnessed the signing of an agreement between the Infinity Power Company, a joint venture between Masdar, the world leader in renewable energy and Infinity Energy The leading developer of renewable energy projects in Egypt, Hassan Allam Utilities Company and the Egyptian government, aiming to develop a 10 GW onshore wind energy project in Egypt, which will be one of the largest wind energy projects in the world.

His Highness Sheikh Mohamed bin Zayed Al Nahyan, president of the state, said through his official account on the social networking site “Twitter”, “I witnessed it and His Excellency President Abdel Fattah Al-Sisi signed an agreement to host one of the largest wind energy projects in Egypt with a capacity of 10 gigawatts We will continue to implement quality initiatives for sustainable energy solutions and promote sustainable development.

The agreement was signed by the Minister of Industry and Advanced Technology, the UAE Special Envoy for Climate Change, the Chairman of the Board of Directors of “Masdar” Dr. Sultan bin Ahmed Al-Jaber, and the Minister of Electricity and Renewables. Energy of the Arab Republic of Egypt, Dr. Muhammad Shaker Al-Marqabi, on the margins of the 27th Session of the Conference of the Parties to the United Nations Framework Convention on Climate Change (COP27), hosted by the City of Sharm El-Sheikh.

On this occasion, Dr. Sultan bin Ahmed Al Jaber: “In line with the guidelines of the wise leadership to disseminate renewable energy solutions and promote sustainable development, the announcement of this massive 10 gigawatt onshore wind energy project, one of the largest projects on this area of ​​the world, is announced. To reaffirm the ambitious renewable energy targets of both the UAE and the sister Arab Republic of Egypt. position on renewable energy, in addition to supporting Egypt’s climate neutrality goals, in particular under the Egyptian Presidency. Current Conference of the Parties (COP27)”.

Al Jaber added that the project confirms that the UAE continues to consolidate its leading role in triggering climate action at the regional and global levels, especially after the recent signing of the Partnership Agreement between the UAE and the United States to invest in the area of ​​climate change. clean energy.

The 10 GW wind power plant, when completed, will produce 47,790 GWh of clean energy annually and will help avoid emissions of 23.8 million tons of carbon dioxide, equivalent to about 9% of Egypt’s current carbon dioxide emissions.

The project falls within the framework of Egypt’s “Green Corridor Initiative”, a network dedicated to renewable energy projects, and will contribute to achieving Egypt’s goal of having renewable energy reach 42% of its population by 2035. the energy mix.

The new onshore wind power plant will provide Egypt with an estimated $5 billion in annual natural gas costs, in addition to providing 100,000 jobs. people permanent Indirect… In addition to adding about 3,200 jobs for operation and maintenance after the completion of the construction work of the station.

For his part, Mohamed Jamil Al Ramahi, CEO of “Masdar”, said: “Masdar is proud to expand its contribution to supporting sustainable energy goals in the sister Arab Republic of Egypt through this agreement aimed at developing of the largest energy project of its kind in the way of the company.. Noting that this The project contributes to strengthening our collaboration with our partners “Infinity Power” and “Hassan Allam Utilities” and building on our close relations with government agencies in Egypt.

Al Ramahi added: “We are confident that this project will contribute to providing clean and sustainable energy to the fraternal Egyptian people, while ensuring that Egypt fulfills its commitments to achieving climate neutrality.”
For his part, the Chairman of the Board of “Infinity Power”, Mohamed Ismail Mansour, said: “We are delighted to participate in this major project in collaboration with our partners, which will allow the Egyptian government to complete its exceptional efforts to ensure effective publish solutions to face global climate change…noting that this project will enable Egypt to supply large amounts of natural gas, maintain economic growth and reduce carbon emissions, in addition to providing large amounts of renewable energy, and Egypt to complete its transition path to a green economy.”

For his part, CEO of “Infinity Power” Nair Fouad said: “The company is always looking for new opportunities and solutions to enable companies and governments to switch from traditional energy systems to relying on renewable and sustainable energy sources… in this project’s ability to provide a package of integrated benefits to Egypt and enable it to make tangible leaps forward on its path of transformation into a sustainable and environmentally friendly country.

He added: “We are eagerly looking forward to expanding our portfolio of sustainable energy solutions serving Egypt and delivering green and clean energy to the entire African continent.”

Last April, Masdar and Hassan Allam Utilities signed two Memoranda of Understanding with institutions supported by the Egyptian government to cooperate in the development of 4-GW green hydrogen production plants in the Suez Canal Economic Zone and on the Mediterranean coast.

During the first phase of the project, a green hydrogen production facility will be built, which should be operational by 2026 and will produce 100,000 tons of e-methanol annually for refueling in the Suez Canal. The facility’s production can also be expanded to 4 gigawatts by 2030 to produce 2.3 million tons of green ammonia, for export and to supply green hydrogen to local industry.

Egypt has abundant sources of solar and wind energy that would provide a suitable basis for renewable energy projects at competitive costs, factors that mainly contribute to the production of green hydrogen. Egypt is also within a group of markets where demand to green hydrogen is expected to increase, which offers strong opportunities for export.

Masdar operates in more than 40 countries around the world and invests in a portfolio of renewable energy projects with a total value of more than 20 billion US dollars and a total capacity of more than 15 gigawatts.

The UAE will host the twenty-eighth session of the Conference of the Parties (COP28) in the month of November 2023. The session will witness the first global assessment of nationally determined contributions since the 2015 Paris Agreement, a comprehensive report highlighting progress towards key global climate goals.